The 18-year-old El Paso, Texas-born Santiago Munoz  scored the late equalizer for Liga MX leader Santos in a 1-1 tie with fourth-place Club America on Sunday. Munoz, who came off the bench in the 59th minute and scored in the 81st, was making his first appearance of the Liga MX Clausura, which is four games in. He made his Liga MX debut in October with a 17-minute appearance in the penultimate game of the Apertura.

Munoz moved to Mexico's Santos after being spotted at the 2017 Alianza de Futbol showcase by Santos scout Victor Rangel.

Munoz scored five goals during Mexico's 2019 U-17 Concacaf Championship title win. He played on Mexico's runner-up team, which included Efrain Alvarez, at the 2019 U-17 World Cup and scored the "Goal of the Tournament." (Munoz is eligible under FIFA regulations to switch to the U.S. national team program.) 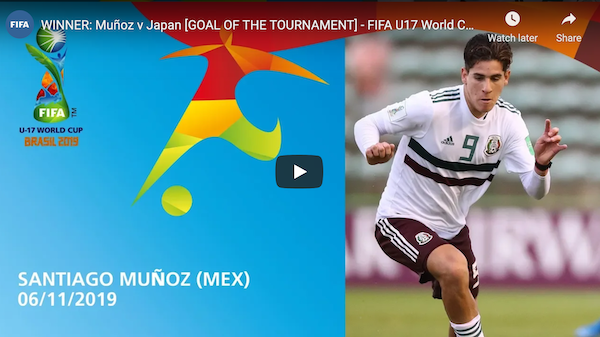