Neville's arrival at Inter Miami -- is this cronyism?

So Phil Neville  will be Inter Miami’s new coach. Is this, as the Miami bosses would have us believe, the beginning of an exciting new era in soccer (well, American soccer, or maybe just MLS soccer, come to that)?


Neville’s appointment quickly came under suspicion -- because Neville is a longtime buddy of franchise owner David Beckham. Let’s be clear about that: there is nothing wrong with helping your friends. It’s a worthy attitude. Why then would both Beckham and Jorge Mas (the managing owner of the club) want to so quickly and heatedly deny it?

Beckham trashes the suggestion: “It’s nothing to do with him being my friend. We are running a serious soccer club here ... we hire people that we feel are best suited for the job." Jorge Mas is aggressively indignant: “I’ll say it in more direct terms than David: Phil Neville was not handed the Inter Miami job. He earned the job.”

That all sounds just great, but it is in fact unconvincing right from the start. It is nonsense for Beckham to say that the appointment has “nothing to do” with his friendship with Neville. Of course it does. But, so what?

The friendship is not the problem. There is absolutely nothing wrong with hiring a longtime friend or associate, someone whose opinions and working-habits one knows, someone who is reliable, etc. Beckham is getting himself in a stew for the wrong reasons.

Hiring friends is fine -- provided they have the talent and the experience needed for the job. The questions and the suspicions about Neville revolve around that second point. Is Neville qualified for this job? If he is not, then what is at work is not friendship but cronyism. A very different mindset.

Mas says bluntly that Neville was not handed the job, he “earned it.” He explains: “There was a very thorough interview process. We conducted multiple interviews for the job with a myriad of candidates.” Which doesn’t tell me anything -- no names, vague numbers (multiple, myriad). Mas is giving us sales talk which, as always, can be (should be) ignored. Anyway, I cannot find anything in Mas’s background (Cuban-American, MA in Business Administration) that suggests he knows enough about soccer to be making judgements about coaching abilities.

Beckham knows soccer as well as anyone, but listening to him boost Neville’s talents doesn’t get us much further. The vagueness continues. Neville, says Beckham, will make decisions that “are best for the team,” as a leader “he’s the right man for the job.”

So far, neither Mas nor Beckham has come even close to mentioning anything that relates specifically to the sport of soccer. For instance: what style of soccer does Neville favor? Closely related to that -- and, to my mind, of vital importance in this particular job -- what does Neville know about Latin American soccer? Answers to just those two questions would start a genuinely meaningful look at Neville’s coaching qualifications. 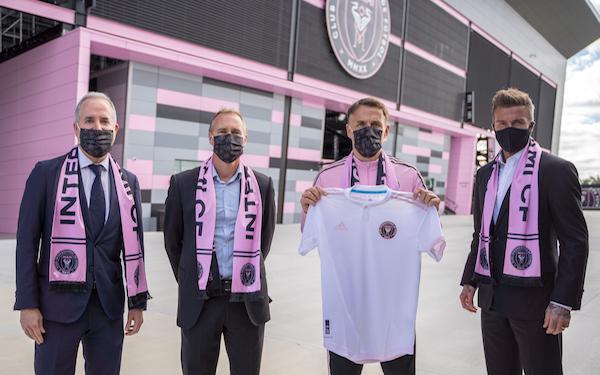 Despite the reluctance of Beckham and Mas to discuss such important specifics, we can still take a look at Neville’s coaching record and whatever comments he himself may have made.

Before getting into that, I need to underline what I consider an important part of the Neville story. The fact that he is English, and that all his 19-year playing career was spent with English clubs. I regard that as significant because, of all the various national soccer cultures, the English version has proved to be the most insular, the most hostile to accepting outside (i.e. foreign) influences. With the result that English soccer has failed to keep up with the changing game. English coaches are not in demand worldwide for that straightforward reason: they are likely to bring with them an inevitably narrow approach to the game.

I’ll have more to say about that shortly. First, let me add a couple of comments about Neville’s “English approach” to the sport -- comments that expose a worrying penchant for physical play.

In 2013 Neville told Daily Mail readers how, 10 years earlier, he had watched the young Cristiano Ronaldo, newly arrived at Man United, mercilessly and deliberately kicked during practice by experienced players like Roy Keane, Nicky Butt, and Paul Scholes: “every time he got the ball they kicked him and they kicked him, -- not just once, they kicked him every day, every week, all season.” A process of “toughening up” that Neville evidently found useful -- after all, he points out, Ronaldo is now “the best player in the world.” In 2015, during a TV stint, Neville spotted Arsenal’s Tomáš Rosický playing a pass while looking in another direction. Neville protested -- if an opponent did that to him during training, he said, he would deliberately injure that player. He later admitted that the comment was unacceptable.

Coming right up to date, here’s a revealing quote from Phil Neville at his Inter Miami debut press conference, when he referred to “my short coaching career.” One suspects a momentary lapsus linguae -- we’re not used to that sort of unvarnished truth.

And truth it is. Neville’s coaching career is both short and uneventful. Starting in 2012, Neville had an assistant coach role with the England under-21 team. The following year he was interviewed for the vacant Everton job, but did not get it. He then became an assistant coach to Manchester United’s first team.

In 2015 he moved to Spain, as an assistant coach at Valencia. As he does not speak Spanish and had no experience whatever of Spanish soccer, the move smacked of colossal hubris. But maybe not, for he was a friend of Valencia’s owner. Neville left Spain in March 2016. As far as I can find, no glowing testimonials to his coaching ability followed any of these short-lived jobs.

Phil resurfaced in January 2018 as coach of England’s women’s team. Early results were promising, but by 2020 things were not going well for Neville. After a run of seven defeats in 11 games Neville admitted he was personally responsible for England's "unacceptable" form. He stepped down from the job on January 18, 2021. His Inter Miami appointment was announced the same day.

Frankly, I cannot see anything in that “short coaching career” that supports Jorge Mas’ claim that Neville has “earned” the Miami job. With that very ordinary record (note, Neville has never been in charge of a senior men’s team), I cannot imagine that Phil Neville was in great demand as a coach in England.

But I can now understand why both Beckham and Mas were so eager to attack any suggestions that Neville owed his appointment to his friendship with Beckham. Neville’s appointment does begin to look like cronyism.

We’re looking at a short and mediocre coaching record, plus the lack of any experience with Latino soccer or its players, plus the drawback of being an English coach. That last point can be demonstrated in a curiously persuasive way. In the current English Premier League, 8 of its 20 teams have an English coach. Of those teams, Aston Villa is in 9th position. The other seven teams occupy 7 of the last 8 positions in the league.

Beckham must know that the record of English coaches in MLS (there have been 13 of them) is not exactly stellar. And Neville himself seems to think his job is to prove that “foreign” (he means English) coaches can succeed in the USA. Could he really have proffered that reason to the Inter Miami selection committee?

What weighs heavily on my mind here, is that we seem to be going through a re-run of the melancholy events that so relentlessly sabotaged Atlanta’s sparkling success.

In December 2018, Atlanta announced a new coach. Like Neville, a big-name guy, but this one had some successful top-class coaching experience. Then came all the usual artificialities that nowadays accompany such announcements. The feverish praise from the owners and the suitably sycophantic comments from the coach. Everything was perfect it seemed, a match made in heaven, soccer heaven that is ... and so Atlanta sank very quickly from the most-exciting club MLS had ever seen down to just another MLS team. Good, yes, but exceptional? Forget it.

We had been assured by the Atlanta bosses that Frank de Boer was just the man for the job -- when it was painfully obvious that his qualifications were highly suspect. I mean -- immediately before his appointment de Boer had flopped spectacularly in Italy (Lasting only 85 days at Inter) and then at Crystal Palace in England (just 70 days). Add to that his glaring lack of experience with Latino players (who were, after all, the main reason for Atlanta’s brilliance) and you’re left wondering if the Atlanta people had any idea what they were doing. And why was anyone listening to them?

There are signs that this same sort of suicidal self-deception is at work in Miami. A new coach, Phil Neville, has been appointed. The perfect guy, of course. But questions have been raised about his qualifications for the job. Those qualifications are flimsy to put it charitably, suggesting that cronyism -- he is a longtime buddy of franchise owner David Beckham -- handed the job to Neville.

I am far from happy to have arrived at such a conclusion.