Five of the six clubs joining ECNL Girls for the 2021-22 season are leaving the recently launched Girls Academy, which announced the first 10 of its new members for its second season. The new ECNL national league clubs include four that had fielded teams in ECNL's regional league. The Girls Academy launched in the wake of U.S. Soccer's abrupt ending of the Development Academy in April 2020. 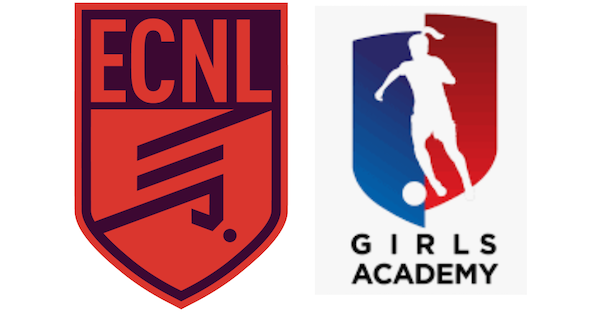 The well-established ECNL Girls had prevented U.S. Soccer's Girls Development Academy, launched in 2017, from rising to become the country's top girls league. In the wake the DA's demise, the Girls Academy created an alternative for clubs not opting for or not being by accepted by ECNL Girls national league.

Of the six clubs ECNL Girls announced will be joining its national league for the 2021-2022 season:

As is the case with the new ECNL national clubs, the 10 clubs joining the Girls Academy are spread over three conferences.

"When the DA ended," said Christian Lavers, president of the ECNL, which also runs a boys league that expanded in the wake of the Boys DA ending while MLS Next launched on the boys side. "Everybody was trying to get in, but we had real challenges with COVID, structure and timing. A lot of these clubs wanted in then when we couldn't put everyone in. Beach FC, Legends, Sporting Blue Valley, Sporting Iowa -- they all played in the ECNL regional leagues this year.

"We told these clubs, we're going to look at your performance in the regional league. Sporting Blue Valley and Sporting Iowa did very well in the regional league. That's why they're joining the ECNL. That is the pathway and transparency in place: Regional league to club competition. If a club struggles in the club competition, eventually they'll  likely be moved to a regional competition. ... Beach and Legends in California had challenges [with COVID restrictions], but they have a history of national success. ... Oklahoma Energy has obviously done well in general as a club."

The additions raise next season's ECNL Girls national league membership to at least 120 clubs. The Girls Academy, which launched with 69 clubs, also expects an increase of membership despite the five departures and announced 10 new clubs so far.

"We're focused on shoring up some geographic areas to make sure travel makes sense, in addition to the competitiveness and quality, and we are making headway," said Girls Academy commissioner Lesle Gallimore. "We're focused on clubs and people who have earned opportunities but really haven't been rewarded. We're connecting with clubs aligned with our vision and our mission of being player-centric. We're only focused on girls, so they're never just an afterthought."

The former University of Washington coach was named Girls Academy commissioner in June, taking on a project she says was borne out of necessity following the DA folding.

"In 10 months, we've gotten off to a really good start, especially considering the challenges created by COVID. I feel good about where we are," Gallimore said. "As a new league, we have to work hard to prove ourselves. I think we've done an above average job so far, and our goal is to do a great job and prove to be a great pathway for girls at the elite level."

Gallimore, speaking on the same day that she and Lavers were guests on Chris Bils' Texas Soccer Summit, said she doesn't expect the kind of acrimony between the leagues as occurred when the DA and ECNL competed for membership.

"When we're out of COVID, and both leagues are playing normal schedules," she said, "I think he [Lavers] and I will definitely have more discussions about how we can cross competitions, how we can unify girls soccer in the country."