Why fans of sports are loving Leeds United

Here's a simple question with no easy answer. Is the idea of professional sports to entertain the fans, or to win games and honors at any cost? An idealist would claim that the idea is to win, while entertaining the fans at the same time. Ideals, though, are something we, or coaches, may strive for but rarely attain.


I switched around a fair few channels and soccer leagues this past weekend, searching as always for thrills, action and incidents. I caught the last half hour of Arsenal playing Leeds United in the Premier League -- Arsenal wasleading 4-1, but the game still had something about it.

Leeds did not look discouraged. They were attacking, and soon pulled back a second goal. With 15 minutes to go, they had a strong penalty appeal denied. Arsenal, meanwhile, twice hit the woodwork at the other end. The play was fast, flowing, skilfull, dangerous. It was the best 30 minutes of soccer I saw all weekend.

The German Bundesliga, meanwhile, subjected me to three goalless draws -- Werder Bremen against SC Freiburg, Union Berlin against Schalke 04, and the 'top game' of the weekend, Wolfsburg against Borussia Mönchengladbach. It was a challenge to give these games my full attention -- in fact I sacrificed 15 minutes of the latter to watch Arsenal-Leeds. The encounters were tense, up to a point, because any of the six sides could have taken all three points right at the death. But it was no surprise when they didn't. There was a feeling early on in all three matchups that, as the cliché goes, they had 0-0 'written all over them.'

As I'm not a fan of any of these teams, maybe I don't have the right to judge the quality of entertainment. Perhaps there are Leeds United fans who would scorn my condescending praise of their team's willingness to take risks and say they would have much preferred a point from a mucky 0-0 draw. Equally, there may be fans of all six German teams who say they are happy with the point their teams took from their tedious, foul-filled goalless stalemates. If I don't like it, I can always cancel my subscription or stick to watching games where my own team's involved.

A few years ago while covering Major League Soccer, I naively undertook a survey of all the league's coaches to ask them how committed they were to entertaining fans, and to the aim of bolstering crowds and growing soccer in the U.S. It was a slight obsession of mine at the time. There were a lot of awful games in MLS in the first decade of this century, and I'd gotten some crotchety locker room responses from coaches when I'd broached the Entertainment Question after another night of negative tactics and absent thrills at RFK Stadium. So now I was politely asking them by email at the start of the 2007 season: what are your plans to promote attacking soccer?

Only two coaches replied, and in very general terms that, of course, everyone at the club was working hard to promote positive play and keep the fans entertained. However, they stressed, growing soccer and producing stellar talent in the U.S. was also a long-term project. Looking back, I put them in an unfair position -- for any coach, results are the priority, while preserving and nurturing the culture of soccer is not their responsibility alone. What was I expecting them to say? That they were planning to play six men up front and to hell with defense? That they'd be unhappy with anything less than eight goals, regardless of which team scored them. 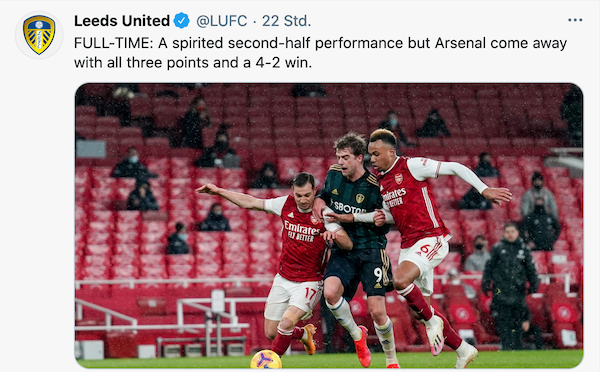 What's fascinating about Leeds coach Marcelo Bielsa right now, though, is that no one is judging him on results. Recently promoted Leeds are not currently expected to win the Premier League or even push for a Champions League place, so he has the space to experiment and take risks. He can coach his team to play the game the way he likes to see it played, despite a budget much tighter than several other teams in the same division.

Leeds was a successful club in the late 1960s and the 1970s, twice winning the league title and making it to the final of the 1975 European Cup, where they were unlucky to lose to Bayern Munich. They were a very good team, but they were also notoriously hard and consequently unloved by neutrals for their physical play. Did the team and its fans care about that? On the contrary, it gave the club a sense of pride and clearly defined identity. You can be sure that their fans would sacrifice some of the current love at large for a trophy or two.

Still, I can't help myself from jumping aboard the heart-shaped Bielsa bandwagon. This season, mid-standings Leeds has been battered 6-2 by Manchester United, but won 5-0 at West Bromwich Albion. In their last 10 games, they've won five and lost five. Such a refreshing and attack-driven approach to soccer speaks for a liberal love of the game that is based on a certain sporting purity, largely unaffected by commercial concerns and the desire to win by any means.

There's no right or wrong answer to my original question. The answer might vary depending on your stake in the game. Supporters, though, love teams with color, flair and character, regardless of affiliation. Professional sports would be enriched if there were more teams attempting to play with the carefree panache of Leeds United.