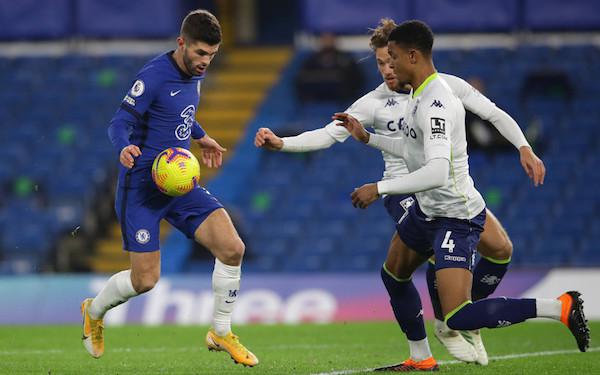 The 22-year-old American did not play in the Blues' 2-0 win over Newcastle United that moved them back into the top four in the Premier League. He has played just 85 minutes in five games for Tuchel, who replaced Frank Lampard in late January.

Chelsea has won its last four Premier League games under Tuchel after it played to a 0-0 tie with Wolves in his first game in charge.

The Newcastle match marked the first time Pulisic was an unused sub -- Tuchel excused him from the 2-1 win at Sheffield United for family reasons -- though Tuchel said two factors worked against Pulisic on Monday.

The German had to burn one of his subs in the first half when Olivier Giroud came on in the 20th minute for injured Tammy Abraham. Premier League clubs are only allowed three subs. Approval for five subs has been turned down three times, most recently by a vote of 10-10 in December (14 of 20 clubs needed to vote for the measure to be implemented).

“Today, the first change was already made in the first half from injury," said Tuchel, "and Christian was a very tight decision if he starts again after the cup game, or if he comes on from the bench. We decided for another eleven to start. Unfortunately, we only had three changes which makes it very difficult to give time to the players, to let everybody play, and to have an impact with the changes of fresh legs. That makes it difficult and the third change we didn’t want to use too early.”

The second-half subs were both defensive in nature: French World Cup champion N'Golo Kante for Mason Mount and Reece James for Callum Hudson-Odoi.

“During the match, we did what we normally do which is to only change to win the match,” Tuchel added. “He deserves to start, or to come in but I could only use three guys. I hope he keeps on going and he will make an important impact for us in the future.”

Pulisic went through similar issues last season under Lampard. He was in and out of the lineup, then injured. But when the Premier League resumed in June after being shut down for three months because of the pandemic, the American was one of the best players in the Premier League, scoring goals, creating them for teammates and drawing penalties.

But since a hamstring injury suffered in the FA Cup final, Pulisic has not been the same player. His assist on the second goal in the 2-0 win over Burnley, Chelsea's first win under Tuchel, was his first Premier League assist of the season to go along with one goal in 15 games.

Pulisic has been at his best when he played on the left wing, but German Timo Werner, a $57 million signing from RB Leipzig, has been playing on the left side in Tuchel's three-player frontline.

Another big attacking threat, Hakim Ziyech, has not played a Premier League game for Chelsea since the Wolves game. The Moroccan international was a $48 million signing from Ajax last summer. He has been in and out of the squad with injuries and reportedly wants a transfer.