Of the direct-kick fouls in soccer, arguably the easiest one to call is holding, or to quote directly from the rules, “holds an opponent.” Contrast this with handling the ball, which takes up not just three words but over 300 words in the rulebook. 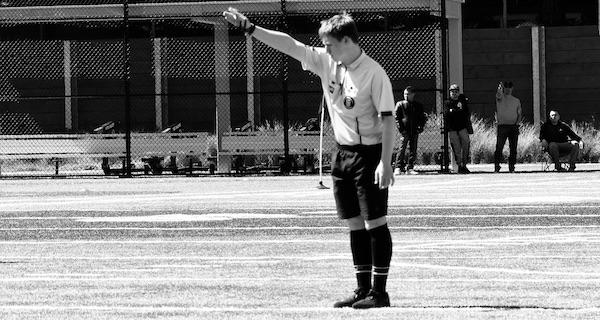 When holding is whistled for a penalty kick and it’s denying an obvious goalscoring opportunity (DOGSO), the defender should be sent off for this reason. A red card for DOGSO also applies to PK fouls from pulling, pushing or when there is no possibility for the defender to play the ball.

Holding almost always involves holding a part of the opponent’s upper torso but on rarer occasions, the lower torso is grabbed such as a player holding an opponent’s shorts plus I have seen a few players on the ground reach out and grab an opponent’s leg.

If the shirt or shorts are grabbed, this can be easy to spot as they often have become larger because of the hold.

I wanted to focus on holding in this article because not whistling holding fouls is a very easy way to lose control of the game. Players tend to react emphatically when held. An unwhistled holding foul can result in retaliation of an elbow going into the chest or worse, the head, of the player who initiated the contact.

For guidelines and best practices for WHEN AND IF your local authorities have deemed it safe to return to the play, check out U.S. Soccer's PLAY ON home page HERE. For U.S. Soccer's pandemic-related FAQs for referees, go HERE.

A decade ago, I was the assistant referee for the same ref in two college games. I clearly remember his pre-game instructions and I believed that he was incorrect yet went along with him for those two games as he was the ref and I was the AR.

The ref stated, “If a player grabs an opponent’s shirt, we are not going to call it unless that player pulls on the shirt.” And the ref then gave a demonstration what he meant by grabbing his own shirt.

Players are smart, particularly those in college, and they will figure out quickly enough when a ref allows some levels of holding and the players will do it. After all, what you allow, you eventually encourage.

This ref figured that out and he changed his pregame instructions with no mention of any holding being allowed.