Substitute Rose Lavelle pounced on a loose ball and struck crisply into the net from eight yards to prevent the scoreline from being as disappointing as the USA's performance in its 2021 SheBelieves Cup opener. 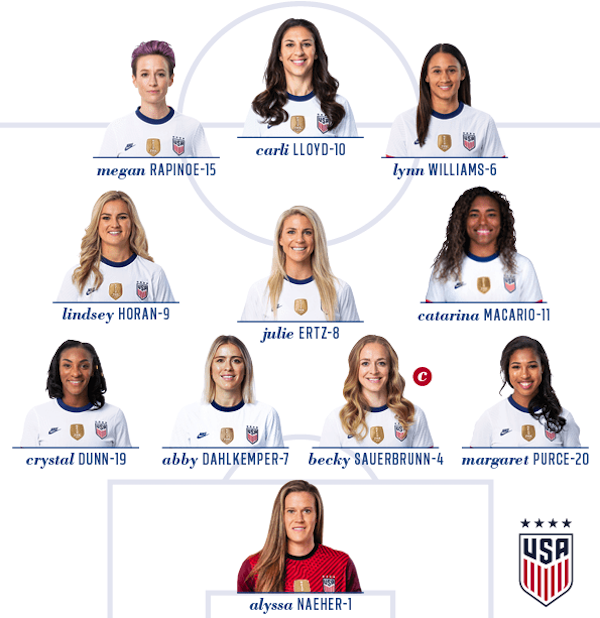 Alyssa Naeher's first-half action comprised of catching a header that went straight to her from Vaessa Gilles and conceding a corner kick when she couldn't grasp a weak Janine Beckie shot. Another big chance for Beckie, in the 54th minute, also ended with a weak shot straight to the keeper. Naeher hooved a ball out of bounds in the 59th minute despite no pressure.

Right back Midge Purce's provided much of the USA's first-half attack, often sent down the wing by Abby Dahlkemper, who also passed well out of the back to other areas of the field. Becky Sauerbrunn thwarted a few Canadian attacks but lost track of Nichelle Prince when Canada came to life a bit in the second half. Left back Crystal Dunn's crosses didn't find a teammate in the first half but she won corner kicks with a blocked cross and a blocked shot. Early in the second half, Dunn hit a simple pass out of bounds during a U.S. attack and with an abysmal back pass presented Canada with a golden chance in the 54th minute. Purce got away with a 74th-minute hand ball in the penalty area.

Catarina Macario started badly, coughing up the ball a couple of times and shooting way off target from 14 yards with no pressure in the 20th minute, after which she rarely appeared in the action through halftime. Macario was involved in early second-half attacks before going to the bench in the 64th minute. Julie Ertz delivered a cross that led to Lindsey Horan's shot off the crossbar in 77th minute, but Ertz hardly had control of the central midfield as she usually rules. She lost the ball a couple of times in the first half and some clunky touches slowed down the U.S. attack. By far the game's outstanding player, Horan constantly fed the front line while also disrupting the Canadians when they tried to work through the midfield. Frustrating overall, and a longtime issue with the USA, was the lack of desire, or its inability, to attack down the middle, relying instead on predictable wing play and hopeful crosses.

Lynn Williams took four first-half shots (including header) only one which required much effort from goalkeeper Stephanie Labbe. In stoppage time, she took a shot from inside the penalty area that nearly hit the corner flag. Carli Lloyd's poor touch prevented her from unleashing a shot inside the penalty area in the 32nd minute. A couple minutes later, Labbe tipped Lloyd's header over the crossbar. Early in the second half, Lloyd shot weakly to Labbe from seven yards out and in the 57th minute missed badly with a close-range header. Megan Rapinoe crashed a 4th-minute free kick into the wall. Early in both halves, Rapinoe sparked attacks, but in the 52nd minute, when Williams provided one of the evening's few purposeful passes from the wing, Rapinoe scuffed a weak low volley straight at the keeper. And before being subbed in the 64th minute, when she retreated to midfield, Rapinoe seemed overwhelmed by the task of evading Canadians.

The USA may have gotten its goal after the subs came on -- thanks to a well-taken opportunistic strike by Rose Lavelle after a U.S. free kick from midfield bounced off a Canadian defender -- but the other vets off the bench wasted chances to turn the game into a convincing U.S. win. Christen Press shot wide from five yards with her first touch, got stripped of the ball twice within the next five minutes -- and when Kristie Mewis delivered a perfect long ball, Press' sloppy touches gave the Canadians enough time to recover. Alex Morgan mis-hit from a Horan cross and headed wide a Dunn cross. Vanessa Gilles caught up to rob Morgan after she was sent though by a long Mewis pass and in stoppage time, Morgan failed to control the ball in the penalty area when a decent touch would have set up a shot from eight yards.

TRIVIA: The USA has played Canada more than any other opponent. It has won 51 of the 61 encounters, lost three and tied seven.

NOTABLE: The USA is 14-0-0 since Coach Vlatko Andonovski took the helm.