Against a more skilled and very much more attack-minded team than the Canadians proved to be on Thursday during the USA's 1-0 win, the USA on Sunday against Brazil delivered a far more pleasing performance. The Americans relished the extra space created in the midfield by Brazil's forays and counterattacking suited their strengths. Well-taken shots by Christen Press and Megan Rapinoe produced a 2-0 win. The USA finally faced a team that tested the defense -- for the first time since its 3-1 win over Japan in March 2020 -- and the backline reminded us how difficult it is to beat the USA, regardless of the offense's form. 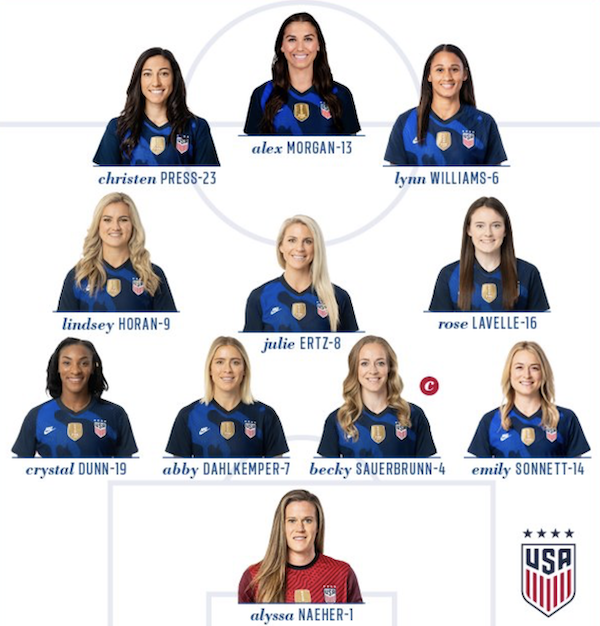 In each half, Alyssa Naeher made a somewhat difficult save. She also snagged a corner kick amid a crowded goal area.

It was frustrating to watch when left back Crystal Dunn, after Lindsey Horan's long run downfield for a lightening counterattack, ended it with an inaccurate pass beyond Lynn Williams. In 66th minute, Dunn trickled a cross to keeper Barbara. If Dunn added more polish to the ease with which she enters the attack, opponents would have major problems. Defensivey, Dunn lapsed only once in an one-on-one, but the central defensive duo of Becky Sauerbrunn and Abby Dahlkemper as usual prevented wing play from posing problems for the USA. They also stifled attacks down the middle. Though less likely to storm forward than Dunn, Emily Sonnett did create attacks with decent passes -- she was part of the setup sequence on the second goal when she tapped the ball to Horan on the wing -- and the couple times she misplayed didn't create severe problems.

Julie Ertz, while taking a hit in midfield that sent her to the grass, delivered a pinpoint pass to Lindsey Horan on the wing, from where Horan's one-touch set Christen Press up for the 1-0 lead. Ertz, although her early shot was badly mis-hit, and Horan, who squandered her own chance with a poor second-half header, did a fair share of defensive work while also being key parts of the attack. Horan also set up Megan Rapinoe's goal with a cross. After a lively start by Rose Lavelle that included a wide shot shortly after kickoff, she got robbed on her attempts to dribble past Brazilians and shot badly in the 70th minute.

Christen Press smoothly cut away from Bruna Benites before stroking her shot into the side-netting inside of the far post to give the USA its 11th-minute lead. Lynn Williams shot non-leathally to keeper Barbara in the second minute after a pass from Press on the first U.S. chance of the game. While her wing play did trouble the Brazilians -- she wisely choose to feed a low ball into the middle for Press' 39-minute shot -- Williams horribly mis-kicked the ball to Barbara in the 43rd minute with other options available amid no pressure. Williams' finishing remains a concern after her poor shooting against Canada. Alex Morgan sent Williams through on a promising run that ended with Williams blasting the ball into a defender's legs. Brazilian fouls stifled Morgan in the first half, and besides the pass to Williams, which came out of the midfield, Morgan did not provide the spearhead threat needed from a center forward.

Carli Lloyd fell far short of providing a threat to the Brazilian defense as a subbed-on center forward is expected to. How Megan Rapinoe evaded her marker Jucinara and struck a ball that flew in from about 25 yards away to volley home the USA's second goal demonstrated the kind of aptitude that keeps the 35-year-old in the Olympic picture. Sophia Smith beat one Brazilian in the penalty area but didn't have the right touch to dodge the second when presented with a 88th-minute chance.

NOTABLE: In Christen Press' last 28 appearances for the USA, she has been part of 27 goals: scoring 12 and assisting on 15.