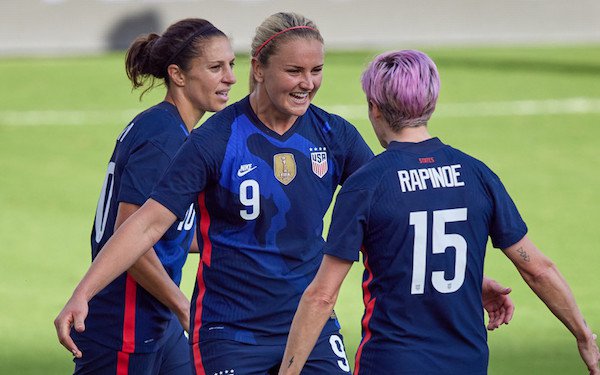 The numbers add up quickly.

In the USA's first two games at the SheBelieves Cup, the 1-0 victory over Canada and 2-0 victory over Brazil, Coach Vlatko Andonovski started 15 different players -- 14 field players plus goalkeeper Alyssa Naeher.

When you add three starters on the 2019 Women's World Cup championship team who are injured -- Tobin Heath and Sam Mewis, who are back in England with their clubs, and Kelley O'Hara, who is in Orlando but has not played -- that makes 17 field players, all competing for starting jobs.

But just 16 field players will go to the Olympics along with two goalkeepers on the USA's 18-player roster, so that means one of those 17 players won't even make the roster. And we are not even considering other players like Kristie Mewis, Sophia Smith and Casey Krueger, who have come on as subs in the tournament, or double world champions like Ali Krieger and Ashlyn Harris, who didn't make the 23-player roster for the SheBelieves Cup.

For Sunday's match against Brazil, Andonovski made changes across each of the three lines: Emily Sonnett for Midge Purce at right back, where O'Hara usually patrols, Rose Lavelle for rising star Catarina Macario in midfield, and Alex Morgan and Christen Press for Carli Lloyd and Megan Rapinoe.

In the case of the changes up front, we are talking two players who entered the game with a combined 155 goals for two others with 177 goals between them. And sure enough -- one starter (Press) and one sub (Rapinoe) scored to make it 156 goals and 178 goals.

Here's the breakout of the 17 field players competing for the 16 spots:

Defenders (6): O'Hara, Sonnett, Purce at right back; captain Becky Sauerbrunn and Abby Dahlkemper in the center back; Crystal Dunn at left back.

Andonovski will likely take six defenders, though it's unlikely he will take three right backs. Sonnett can play elsewhere on the backline. Midfielder Julie Ertz can drop back from midfield and play at center back, where she started at the 2015 World Cup in Canada, lessening the pressure to take another center back, like Tierna Davidson, who has yet to play in Orlando.

All five will likely go to Japan. Just how deep is the U.S. midfield? Horan didn't even get on the field in the 2019 Women's World Cup final, but she was arguably the best U.S. player in the first two games. She has been involved in eight of the 13 U.S. goals so far in 2021.

Forwards (6): Lynn Williams and Heath on the right wing; Morgan and Lloyd at center forward; Rapinoe and Press on the left wing.

The assumption is that only five will go to Japan, but whom does Andonovski leave out? Williams began the year as the long shot, but she and Ertz are the only players who have started all four games. Andonovski likes Williams' ability to press opponents and provide width in the attack.

Right now, Heath is behind the others due to the ankle injury that will likely keep her out of action through the April window of international matches. The injury was a huge blow since she was the most impactful of the six Americans who have played in the WSL this season, lifting Manchester United into the title race.