Beating Bayern is more than just winning a game of soccer

Bayern Munich -- the current European and Bundesliga champion, German cup holder, and Club World Cup winner -- is a club that in many ways is very hard to like. The team right now stands for total success, and some of us have a problem with that. Bayern fans would say we are bitter and jealous of all their trophies. Maybe that's true. At the same time, I am grateful for the German club's monopoly on honors. It makes their occasional defeats so much sweeter to behold. 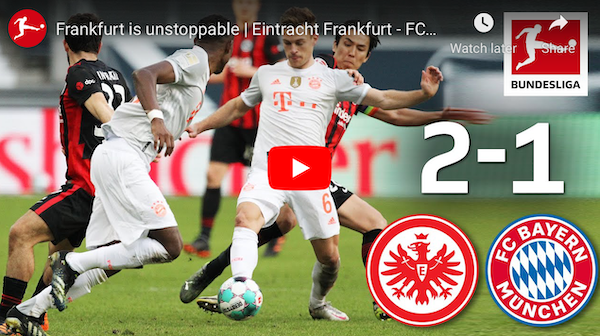 At the weekend, Eintracht Frankfurt beat Bayern Munich 2-1 in an entertaining Bundesliga encounter that meant the Bavarians' lead at the top was cut to just two points, ahead of RB Leipzig (though still seven ahead of Frankfurt). Eintracht victories over Bayern are rare. True, there was the memorable German Cup final victory in 2018, and a magnificent 5-1 shellacking in the league last season -- following which Eintracht failed to win for almost three months, and Bayern went on to become champions for the eighth successive season. And the norm is that Bayern beats Eintracht, often by a hefty margin -- Eintracht's last four league visits to Munich have seen them concede 19 goals.

Now, these are just games of soccer with ultimately meaningless stats -- goals for, goals against, points won, points dropped. When the history of our times are written, no one's going to read any significance into the current Bundesliga standings. After each game, we move on to the next one, because the joy of sport comes from the euphoria of the present, celebrating that moment when the ball hits the back of the net. Especially when it hits the back of the Bayern net.

That's fine, because Bayern seem to thrive on being disliked and on consciously mining negative emotions. The club cultivates a public image designed to make most right-thinking people recoil at their every off-field deed and utterance. Chairman Karl-Heinz Rummenigge once began a press conference in reaction to perceived media criticism by quoting the German constitution: "The dignity of all human beings is untouchable ..." Oh, you poor, suffering millionaire souls.

This month, he suggested that soccer players should be prioritized for the COVID-19 vaccine to serve as a good example to others. Such selfless thinking! Honorary President Uli Hoeness moaned that Bayern's plane being refused the right to break the ban on night flights on its way to Qatar from Berlin two weeks ago overlooked the fact that the team was apparently going to the Middle East "to represent German soccer."

Quite right, Uli, where's the special treatment for our goalscoring heroes in these trying times? Bayern was going to the Club World Cup to represent only their own brand, and to make some money at the same time, while ignoring yet again the serial human rights violations that have taken place in the country as it prepares for next year's FIFA World Cup.

The Club World Cup is a bust -- no one watches it or cares about it. FIFA should have called this season's tournament off because of the coronavirus, or Bayern should have refused to go. Instead, it managed to squeeze its two meaningless games against Al-Ahly of Egypt and Tigres of Mexico between Bundesliga weekends. It came home whooping about a clean sweep of six trophies in a season (if you really want to classify the single-game German and European Super Cups as trophies worth talking about). The potential pitfalls of such a trip were underlined when forward Thomas Müller flew back early from Qatar after testing positive for Covid-19. Social Democrat politician and epidemiologist Karl Lauterbach (a Harvard graduate) said Müller should have served his quarantine in Qatar, and that he should not have taken a flight while infected. He also pointed out that Bayern's trip to the competition was risky and irresponsible, and a poor example at a time when Germans are being advised not to leave the country. Those are all valid and sensible points. So how did the club react?

Coach Hansi Flick, who is not a qualified epidemiologist, questioned Lauterbach's expertise. "In this whole corona discussion," Flick said after the team's return, "I find that we're getting to the point where we've had enough of hearing from all these so-called experts. Mr. Lauterbach's always got something to say, on every matter." Lauterbach reacted calmly by inviting Mr. Flick to a discussion on the matter at hand. Flick accepted, but meanwhile he'd become a darling of the extreme right Alternative für Deutschland (AfD) party, so had to engage his lawyers to stop them from using his quotes to attack Lauterbach. "I do not want to be connected to this party in any way," Flick told the media.

Who knew that spouting populist, ill-informed nonsense would see you aligned with habitually mendacious politicians now legally classified in Germany as fascists?

Public relations should be a no-brainer for professional soccer teams right now. At a time when millions of people are restricted in how they work, study, play and travel, all you really have to do is not act like jerks. Bayern's entitled conduct, its persecution complex and its spoiled, whiney tone imply that we are not showing enough respect for their non-stop awesome triumphs. Am I jealous of all those trophies? Possibly, though it's not something that keeps me awake at night. I prefer to take the odd unexpected victory, all the more precious for its rarity. That's the upside to both Bayern's serial success and its frequently obnoxious front. Beating them becomes not just a sporting achievement, but an enduring moral delight as well.

germany
2 comments about "Beating Bayern is more than just winning a game of soccer".
Read more comments >
Next story loading