Well, whoop-dee-do and drinks all around! Inter Miami has announced the first signing of the brave new Philip Neville era. 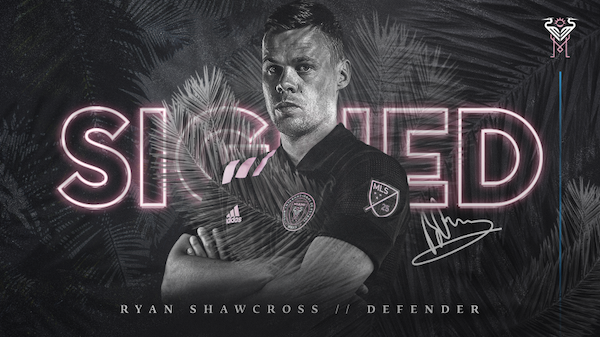 And what a signing -- I mean, words cannot fully convey the impact of the arrival of Ryan Shawcross. That is, the words used by the club do not do him justice.

You remember him, of course? No? Then I must use the MLS, and the club’s, encomia. Here we have the praise being ladled out by the club’s sporting director, the excellent Chris Henderson: “Ryan fits the Inter Miami DNA because of his experience and his longevity at a club [he spent 14 years with Stoke City]. He's going to be able to come here and be a leader, not only on the field, but his leadership will be seen with the young players and players coming through. He's physically dominant, his feet are good, his range of passing is good and we think he's going to be a great addition to our backline.”

Coach Phil Neville went further and couldn’t resist using the word “brilliant”: 'He's a good leader on and off the field, he sets the example for others to follow in terms of his professionalism. He's someone that I think will be a brilliant asset to the club over the next couple of seasons.”

Even so, as I mentioned, these words do not capture the total Shawcross package. I must help out here. Shawcross is 33 years old. Something that got overlooked, possibly because it rekindles all those jibes about MLS being an “elephants’ graveyard.” Also missing from the official Shawcross buildup were the unfortunate tidings that he has been suffering lately from an assortment of injuries.

A broken fibula in 2019 needed surgery and sidelined him for four months. He returned to action in December of that year but lasted only 14 minutes after picking up a groin injury. He was out for two weeks but, after playing just two more games suffered another calf injury.

His next game didn’t come until June 2020 - he didn’t last the full game, and missed the rest of the season. His injury woes continued. In the current 2020–21 season he has made just two substitute appearances.

And it’s probably worth mentioning that Shawcross left English second-tier Stoke City on a free transfer, giving Inter Miami the coup of capturing this brilliant player without spending a penny.

Henderson mentioned that Shawcross is a “physically dominant” player -- which does need more words. Oh yes, Shawcross is physical all right. You bet. Back in 2010 Shawcross was big news in English soccer. Not, sadly, for any act of soccer brilliance. Evidently that “physical domination” element in his play had led him astray. His tackle broke the leg of Arsenal’s blossoming young star, the 19-year-old Aaron Ramsey. As is usual in these matters in England, Ramsey’s agony was soon forgotten, while sympathy was showered on Shawcross for this “unfortunate accident.”

Arsenal fans, and Arsenal coach Arsene Wenger felt differently. They were right. This was not an accident. It was nasty. And it turned out that this was not the first opponent sent to hospital by Shawcross.

I cannot imagine the Arsenal fans in Miami (I assume there is a coterie there) will assemble to cheer Shawcross on.

So this is the player whose “leadership will be seen with the young players and players coming through.” So says sporting director Henderson. I’ll confess to extreme suspicion when I find that word, leadership. It crops up far too often when a player is being lauded. A nice vague plaudit when other more tangible qualities -- high goal-scoring, multiple international appearances, top titles won -- are lacking.

I have added some words to round out the official Miami Inter portrait of Ryan Shawcross. Points that Inter Miami, for obvious reasons, chose to omit.

He will be brilliant says coach Neville. Will he? He brings, says sporting director Henderson, good feet (gawd, I should hope so), and “his range of passing is good.” Well, there’s something. An English center back who can pass the ball. More than one Dutch defender has told me that their tactic, when they lose possession while playing against England, is to quickly pressure the England players -- except for the center backs. Trying to ensure that it is a center back who has to distribute the ball. The passing would then be so bad, that the Dutch would quickly regain possession.

Frankly, Shawcross does not impress me as the sort of player that either Inter Miami, or MLS needs. A standard English center back (they will mis-name him, of course, as a center half) at the end of a standard career. But there’s always the positive angle, that Inter Miami got him on a freebie.

King Lear tells us that: “Nothing will come of nothing.” But looking on the bright side, maybe Inter Miami can instill new life into that corny old soccer phrase about “creating something out of nothing.”