There may not be a group that collectively cares more about U.S. Soccer than those who have pulled on the jersey and gone out to represent the sport and the country they love, all the while coping with the reality of soccer’s lower-tier status in American sports. Now a new generation of former players is moving into the administrative ranks of the game determined to make an impact.

U.S. Soccer Federation President Cindy Parlow Cone is running unopposed to finish off the last year of the original term of Carlos Cordeiro, who resigned in March 2020. Cone (formerly USSF vice president) has served in the presidential role since that date. She is far from alone as a as a former national team players at the federation. Kate Sobrero Markgraf serves as general manager of the USWNT. Brian McBride was appointed the general manager of the USMNT last month. Earnie Stewart is U.S. Soccer sporting director. Gregg Berhalter is the men’s head coach.

Soccer commentator Alexi Lalas, also a former national team player, contends that the ability to kick the ball well at a high level doesn’t necessarily translate directly to other management skills. “What it really does is ensure that when there are failures or problems, it tends to soften it, because the decisions are openly being made by ‘soccer’ people and they often get the benefit of the doubt,” Lalas said.

Depending on the result of this weekend’s election at the Annual General Meeting, the ranks of former national team players at the USSF could rise.

“This is a great opportunity for me to use my lived experience and background to help U.S. Soccer at every level,” said Cobi Jones, who is running for vice president of the U.S. Soccer Federation against three other candidates, Bill Taylor, Tim Turney and Jim Sadowski.

Key themes in the platform Jones hopes to advance if he wins the post include access and representation, helping U.S. Soccer to be more inclusive. Jones noted that he’s heard for years from players of color that they don’t have players to look up to in soccer or how expensive the cost is to travel to a key tournament or to register for a top team. “If that had been that way when I was coming up, my parents would have never been able to have me play,” said Jones. “We have to encourage that access.” 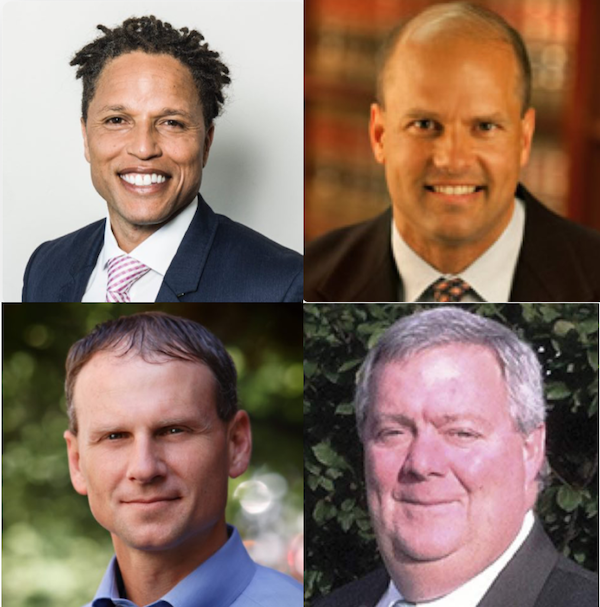 Jones’ path to becoming the most-capped player in U.S. men’s history wasn’t always a typical one, even though he played AYSO and club soccer when starting out. “I never made it to the state team. I walked on at UCLA. I found my own roundabout way into the system. There’s a few of those stories now, where players at the later stages get recognized. People need to understand we can make it more clear what that development pathway might be, but if that pathway isn’t working, they can take different routes to get where they want to go. I will always be an advocate for that.”

“I’ve known Cobi since we were teenagers, played against him, with him and have seen him grow into an incredible man,” Lalas said. “He’s one of our legends of the game. Regardless of whether he gets elected or not, I’m excited he decided to run. But how he plans to carry out these ideas remains to be seen.”

Jones mentioned looking to introduce initiatives to allow for soccer games in underserved communities by working with local groups, presently unaffiliated with the federation. Rather than shooting for a specific number on increased youth participation, Jones aims for a broader target of diversity and elevated participation across a wider range of groups, including adult participation, especially in specific areas such as coaching courses and referee seminars, all of which he believed to be key elements of U.S. Soccer.

“You can’t just be a figurehead,” said Jones. “You have to put your reputation on the line and really advocate for diversity at U.S. Soccer.”

Jones acknowledged that in his playing days, the focus was different. “Diversity was never even a point that was addressed,” he said, then moved on to name other topics he wants to tackle as vice president. “We can do a better job of standing with our women’s national team. We also need to evaluate how the federation money is being spent and where the money is being spent.”

Only with a willingness to rock the boat can certain systems be improved.

“Does this generation of former players at the USSF have such a vested interest in the status quo that they don’t want change?” Lalas speculated. “People do want to evolve. They do want change that provides more opportunities that they know others didn’t have.”

The vice presidency of the USSF is an unpaid positioin.

“All of us candidates are volunteering our time here to try to improve the federation. It’s an important vote. Everyone is trying to help U.S. Soccer. For myself, with the background that I have, I have the ability to bring different groups together and bring people together.”

Indeed, Jones, who was part of World Cup teams with Stewart, McBride and Berhalter, looks forward to a reunion of sorts at the USSF. “It would be a benefit to have people that have good relationships and can figure out ways to work together for a greater goal,” Jones said. “If what I’m doing crosses paths with them, I anticipate we would work well together.”

One element the federation must grapple with is the current challenge of the men’s program, which, though it has a number of young talents now playing overseas, failed to qualify for the most recent World Cup in 2018.

“I cannot think of a moment in time when we have been more optimistic and bullish about American men’s national team and men’s soccer in the United States,” declared Lalas. “This comes just a few short years after, again, I can’t think of a time when we were at a lower point, more depressed and angry and despondent about men’s soccer in the United States.”

Jones did not shy away from the idea that the federation should play an active part in the redemption arc of the men’s national team program.

“The federation has to take a significant role,” Jones said. “Any situation where the team does not qualify for a World Cup, it is a huge setback. That goes on the women’s side, too. We’ve got to do what is necessary. The responsibility falls on the federation, the coaches, the players. Everyone needs to understand that. We’re all working towards a successful World Cup. You’ve got to strive every day and do all that’s necessary to qualify.”

In the wake of the U.S. men’s World Cup qualifying failure of 2017, Sunil Gulati refrained from seeking another term as USSF president, stepping aside from the post he had held since March 2006 and continuing his primary employment as an economics professor at Columbia.

“It does make it more difficult, because it is a lot of time and effort, especially for people who have full-time jobs, to run for the vice president position,” stated Jones. “If people want to change that, so be it. I’m good right now as a volunteer, going in here to help U.S. Soccer.”

Besides the president and vice president, the positions on the Board of Directors at the USSF are all unpaid positions. Great power at U.S. Soccer may come with great responsibility, but it doesn’t come, at present, with any paycheck.

“At times, it’s a thankless job,” Lalas said. “The ones who have stepped up into these administration positions are unpaid. But we’re holding the USSF to account. It’s on their watch, good or bad. I hope it goes well.”