There’s been little reason for college soccer coaches and players to smile this past year. COVID-19 knocked out practices and games last spring. Most conferences canceled their fall schedules. A special winter/spring season offered a bit of hope. But new cases, quarantine restrictions and fickle weather have played havoc with those matches, too. 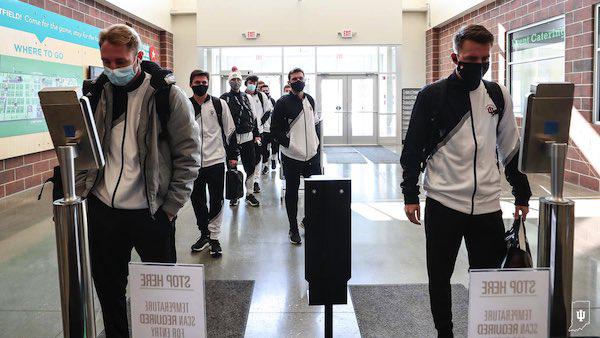 Yet when anyone sees the Grand Park field, their eyes shine.

The multi-sport facility in Westfield, Indiana, has become a de facto college soccer center this year. Men’s and women’s teams from the Big Ten and other conferences play “home” and away games on one of three wide, well-groomed fields. Safety precautions are followed closely, including temperature scans for participants, mask and social distance monitoring and special entrances and exits.

And because those three fields are indoor, there’s never a chance of rain or snow. The 400-acre complex half an hour north of Indianapolis has just about everything: 31 multi-purpose outdoor fields. Twenty-six baseball diamonds. Training facilities for the NFL’s Indianapolis Colts and USL’s Indy Eleven squads. Office space for the Indiana Soccer Association.

But it is the 370,000-square foot indoor space – peaked in the middle with an 82-foot roof – that is the “wow” factor for the many college soccer teams that have flocked to it since matches resumed this year.

They don’t even care if their team or conference bans spectators from the 1,200-seat bleachers. Though facilities operations manager Matthew Trnian is responsible for football, lacrosse, baseball, softball, basketball, volleyball for all ages, from recreational youth to adult – and a few home and garden and consignment shows too – he is spending plenty of time now on college soccer. 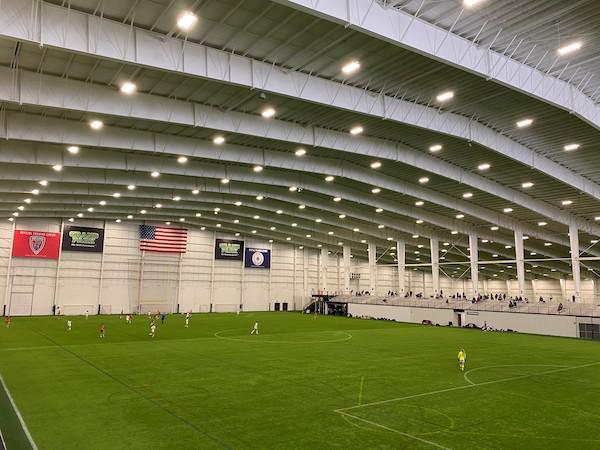 Grand Park opened in 2014. It shut down – along with much of the rest of the country – last March. It reopened in June, with light practices. The first event to return was in late June. In July – helped by state protocols that were more lenient than in many states – the facility became almost fully operational. Teams came from as far as the East Coast for competition. The staff worked closely with health officials to ensure safety. Trnian said there have been no “spread events” associated with the park.

Big Ten schools knew Grand Park well. It has hosted three men’s conference championships, and two for women. Indiana University took the lead in inquiring about rental for matches this winter. Other schools followed. A well-run indoor field seemed the answer to every athletic director’s prayer.

Last week, IU’s men’s and women’s teams played there. On Tuesday, the Hoosier men beat Ohio State, 3-0. The Buckeyes were listed as the home team, but Indiana – much closer geographically – handled game-day operations.

Other programs that have used Grand Park, or will, include Butler, Marion, Ball State, Xavier and Saint Louis.

Working with so many athletic departments has been “eye-opening,” Trnian says. Each school has its own rules and protocols. Big Ten schools have more requirements than Division III. Some conferences or universities do not allow fans. Others permit parents, guardians and siblings. Every match is different.

But each one gets Trnian’s staff’s full attention. There is careful field maintenance. Regular sanitation. Benches are socially distanced. Hydration is provided.

This week, Grand Park’s attention turns to a men’s college showcase, for high school club players. There will be more such events in March and April, when the outdoor fields open. In May, the Indiana Soccer Association hosts cup play.

But right now, Trnian is concentrating on the college matches. He says that when athletes and coaches – accustomed to foul weather, battered by COVID cancellations – first see the Grand Park turf, they light up. That’s the joyful part of his job.

Grand Park might not be the only game around. “You could use Lucas Oil Stadium,” he says, referring to the multi-purpose, 67,000-seat facility in downtown Indianapolis. But, he adds with a bit of understatement, “It might be a bit more expensive.”