Georgetown's Brian Wiese on defending a national title during the pandemic: 'Getting on the field is a win'

After a full year of stops and starts, the Georgetown University men’s soccer team was rolling – literally. 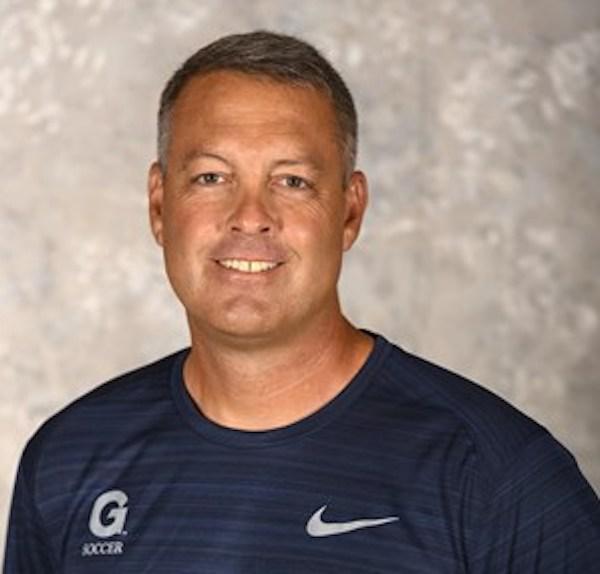 The 2019 NCAA Division I champions were back in action. The fall season had been scrapped. Finally, after five weeks of training, they played a game against Virginia Commonwealth University, a Feb. 10 friendly. Now they were on two buses, to play at powerhouse University of Pittsburgh.

Ninety minutes after leaving Washington, D.C., a text message delivered bad news: One of the Hoyas had tested positive for COVID-19. The buses turned around, and headed home.

“As a coach you’re used to predictable, year-long cycles: recruiting, preparing, training, playing,” says Brian Wiese, in his 15th year leading the team. “Now it’s, ‘So what do you think we’ll be doing on Monday?’”

Wiese and his players could be forgiven for mourning all that they’ve lost: a chance to defend their national title last fall, the camaraderie of a team, growth as athletes.

They don’t. “It takes a lot of mental energy” to adapt to the new normal, Weise says. “But we’re just happy to be out there playing.”

Even if, from one day to the next, they don’t know who they’ll be facing. Or where.

The coronavirus swept onto campus last spring a year ago a week before the Hoyas were to leave for a European trip. Since then, Georgetown soccer has been whipsawed by ever-changing rules and regulations. There are national and local guidelines, Big East mandates and university policies. “You get used to short-term timelines and decision-making,” Wiese says. “Very short-term.”

In mid-January, athletes – and the senior class only -- returned to campus. The soccer team included players drafted by MLS, now in limbo as the league decided when it would begin training, and freshmen players suddenly acclimating to college life without the usual support of classmates.

Wiese prepared them for the challenges ahead. “On Day 1, I said, ‘We may have to turn a bus around.’ That’s the price of admission. They get it.”

He had no idea how prophetic his words would be.

Georgetown enacted every safety measure possible. There was constant testing and contact tracing. They chartered two buses for away games, to maximize social distancing.

His players heeded all the precautions. The team went five weeks without a positive test. They were eager to play. “You can only train with each other for so long,” Wiese notes.

They got the VCU match in. Then came the crushing news, on the road to Pitt.

Of course, the Panther game was not the only casualty. Upcoming games with George Washington and James Madison were canceled. George Mason was in doubt too; Wiese was not sure if his squad would be ready, if 10 days of quarantine were mandated.

That’s a tough spot for a coach. It’s just as tough, he acknowledges, to be on the other side. “If your opponent can’t play, now you have to fill that game. You call everyone you know. ‘Can you play tomorrow? Where? What kind of testing do you do? What’s the weather forecast?’ You feel like you’re in a flea market.”

On Tuesday, Wiese was trying to replace the George Mason match. Georgetown, it turned out, could have played – but now the Patriots were missing too many players.

Wiese and assistant coach Mike Casper phoned every coach they knew. They also sent inquiries via list-servs (“Looking for a game – contact us!”).

None of a dozen possibilities had panned out. The reasons included testing procedures, schedules, injuries, field availability and logistics.

Through it all, Wiese says, his players have been “amazing. This is really hard for them to navigate. They know some leagues – the Ivies, the Big West -- aren’t playing. Their mindset is gratitude for being together, and playing. They know some things are out of our control. If you can’t accept that, you’ll be smashing your head against the wall.”

After a year of turbulence, the Hoyas are “now trained to roll with the punches. Things are not how they were. It’s the big things like who do we play when, and the little things like not using a locker room. If you can’t handle it, you should probably take another year off.”

For the moment, things are looking up. The Big East begins play on Saturday. There are 10 regular-season matches through April 10, followed by a tournament. The schedule includes some wiggle room, for making up contests that will inevitably be postponed.

“The whole challenge of repeating as national champions has taken a backseat to planning our next game,” Wiese says. “Right now, just getting on the field is a win.”