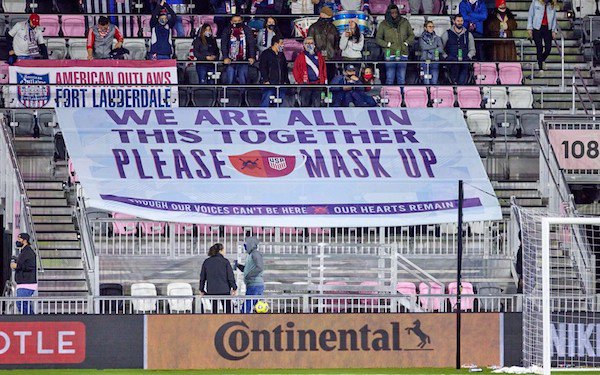 After months with little or no activity, the U.S. national team program -- men's and women's senior teams -- is back in full swing.

At Friday's virtual meeting of the Board of Directors, the men's and women's general managers Brian McBride and Kate Markgraf presented updates on their respective teams and their plans to ramp up.

Concacaf's pre-pandemic plan for World Cup 2022 qualifying had the USA playing eight qualifiers in FY2021 and two in FY2022. Since then, the Hexagonal with 10 games in the final round of qualifying is out, and the Octagonal is in with 14 games, all in FY2022.

The Olympics and the costs associated with qualifying (for the men) and playing in the tournament (for the women and perhaps the men) have been moved from FY2021 to FY2022. Unlike World Cups, the Olympics don't offer revenue potential in the form of FIFA distributions.

The unprecedented programming is to blame for the continuing pressure on U.S. Soccer's finances. The federation is projected to show an operating deficit of $39.4 million for FY2021 in large part because its two main revenue streams -- revenues from commercial and sponsorship agreements and national team games -- collapsed during the pandemic, down $73.5 million from the previous year.

The revenue picture for these two main revenue streams is expected to improve to the tune of $28.8 million in FY2022. But that is almost entirely wiped out because of the delayed national team schedules, which will add expenses of $27.4 million. 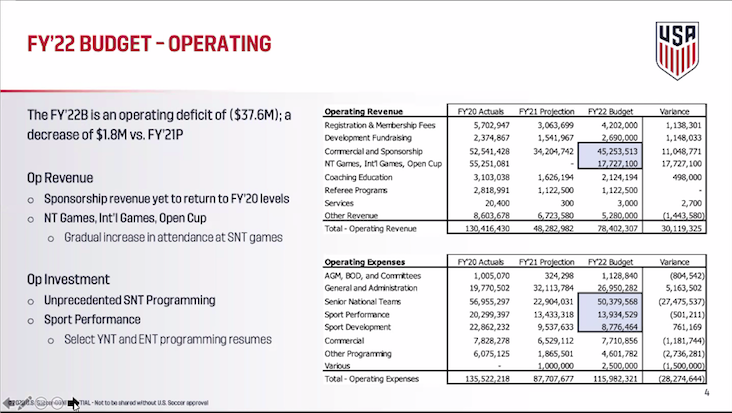 On Friday's Zoom call to go over the FY2022 budget, Pinky Raina, U.S. Soccer's chief financial officer, said she has "relative confidence" that the year-end picture for FY2021 will be better than projections. But she confirmed that current projections put what she described as the federation's "nest egg" -- its net investment balance -- down to $22.6 million by the end of FY2023.

For a matter of perspective, U.S. Soccer's net investment balance was $162.7 million at the end of FY2018, boosted by the windfall from its organization of the 2016 Copa Centenario. It will have gone through $140.1 million of the $162.7 million in just five years. Some of the spending down was planned, but the pandemic has and will continue to put stress on the federation's financial health.

How soon the soccer market gets out from under the pandemic will be critical. U.S. Soccer will begin the year with projections of games being played at stadium capacities of 25 percent. If it can get to 75 percent by September -- when the first of seven Octagonal home games is played and the women will, hopefully, kick off a post-Olympic gold-medal tour -- the revenue picture will look a lot better.

On the Zoom Q&A, former U.S. Soccer president Sunil Gulati jumped on to respond to the concerns of Indiana Soccer executive director David Guthrie about the federation's health.

"We're not going to be going out of business," said Gulati, who ticked off reasons for optimism on the revenue front: a new commercial agreement that will be negotiated over the next year and go into effect in 2023, increased revenues from women's national team and the ramp-up to the 2026 World Cup.

Even without them, he said it would take an unprecedented downturn for the federation's revenues to decline.

"It would take, not a pandemic, which is hopefully a short-term event for all of us," Gulati said. "It would take a five-year period of nothing we've ever had for U.S. Soccer in the last 35 years in terms of our commercial revenues not going up."

Other news from Friday's BOD meeting:

-- If all goes well, a decision on the U.S. host cities for the 2026 World Cup could be approved by the FIFA Council at its December 2021 meeting. There are currently 17 candidates.

-- U.S. Soccer will launch new regional identification camps in late March. The number of camps have been scaled back. They will be the first step in relaunching the national youth team programs dormant for almost a year. (The pandemic cost players in four birth years -- boys 2001 and 2004 and girls 2000 and 2003 -- the chance to play in world championships.)

-- NWSL commissioner Lisa Baird has joined the board as a Pro Council representative, replacing Steve Malik, owner of North Carolina FC and the North Carolina Courage. She gives the board five female directors, the most since it was scaled back to 15 voting members in 2006.