I don't want to depress you any more than necessary in these stressful times, but next year is a World Cup year. The 2022 event, to be hosted in the tiny Middle Eastern state of Qatar, has become like one of those ominous dates in your calendar you hope that time will somehow defy. The final exam you haven't studied for. Lunch with the profane and racist uncle. The office holiday party. The game against the team whose coach never stops yelling even as they're beating you 7-0. 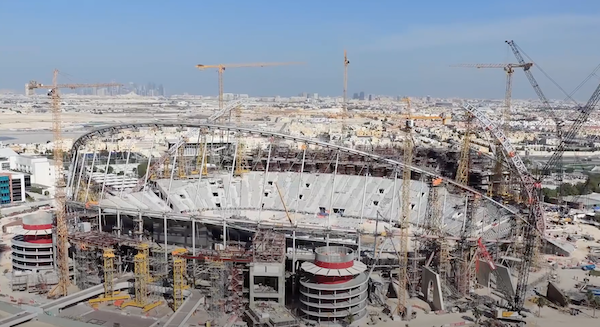 There is little about this tournament that soccer fans can look forward to, unless we're willing to shut out all ethical considerations. Last week, UK daily The Guardian came up with concrete stats to confirm what multiple human rights organizations had already reported - over the past decade, thousands of low-paid migrant manual workers have died, and will continue to die, in unexplained circumstances so that next year we can watch 32 countries compete in a soccer tournament. I defy readers of that sentence to express it in any other way.

"Data from India, Bangladesh, Nepal and Sri Lanka revealed there were 5,927 deaths of migrant workers in the period 2011–2020," the newspaper reported. "Separately, data from Pakistan’s embassy in Qatar reported a further 824 deaths of Pakistani workers, between 2010 and 2020." The paper noted that the death figure was likely to be much higher as it excluded numbers from Kenya and the Philippines, two countries that send high numbers of low-wage workers to Qatar.

It is suspected that many of the otherwise healthy young men died as a consequence of working long hours in the country's extreme summer heat, but autopsies were rarely if ever carried out. The huge Qatari construction boom has centered around stadium and infrastructure projects following the 2010 decision by FIFA's Executive Committee to award the World Cup to Qatar. The shenanigans and bribery behind that decision are covered at length in a book that every soccer fan should read, by Heidi Blake and Jonathan Calvert. Its title is self-explanatory: "The Ugly Game: The Qatari Plot To Buy The World Cup." Most of the 24 exclusively male members of that committee are disgraced (banned for life or suspended from office), deceased or, in the case of Chuck Blazer, both.

As fans, we face a straightforward moral choice. We can choose to either watch or not. If enough people chose to switch off, or not attend, it will make a difference. However, this will not happen. As media coverage of the deaths fades, most fans will find a way to block out yesterday's bad news about unnamed workers from distant countries. Or we will justify watching on the grounds that the stadiums have been built and the tournament's going ahead anyway, so what can you do?

For the participants, it's a different story, because players or coaches can have a much more direct influence. German national team beach volleyball player Karla Borger, for example, has backed out of a tournament beginning next week in Qatar because the host nation laid down rules about what players have to wear -- T-shirts and knee-length shorts instead of the usual bikinis.

"I wanted to make a stand for my sport," Borger told the Süddeutsche Zeitung. "It was important to me to make a statement." She had also noticed on television that after the Club World Cup final between Bayern Munich and Tigres last month, Qatar's most senior official, Sheikh Joaan bin Hamad bin Khalifa Al-Thani, ignored the final's two female referees and refused to shake their hands. Borger's coach, Helke Claasen, is also refusing to travel to Qatar because, she says, as a woman she does not feel accepted there, even though the hosts have now reversed their dress-code restrictions following the outcry that began with Borger's protest.

Borger, who had no idea that her stand would make such waves, added that The Guardian's report on worker deaths in Qatar is "horrifying. And it confirms my decision. Every single person who dies there is a dramatic case. But we're talking about 6,500 people, 6,500! That gives me shivers down my spine."

It would cost any soccer player a lot in terms of both money and prestige to announce that they were boycotting a World Cup tournament. It would take a lot of courage too. That's not to say it might not happen, but it's no more probable than fans blanking their TVs when the tournament kicks off.

There would, however, be nothing to prevent a group of influential, high-profile players demanding that an independent enquiry be opened into the unexplained deaths. The goal of such an enquiry could be to properly compensate the families of the deceased, and honor those who have lost their lives so that the rest of us can sit in our armchairs and cheer a ball crossing a line painted between two goalposts.

While the dress code for beach volleyball players might not seem like a world-shattering cause, Borger's stance and Qatar's subsequent concession prove how sensitive the state is to criticism as it strives to present a well-polished image of itself to the world at large. Imagine how many reforms could be achieved if FIFPRO, the players' international union, was pressed by its members to issue a statement questioning their collective participation in next year's tournament in the light of the latest worker death numbers.

The handle of FIFPRO's twitter account is @FIFpro ("empowering the world's professional football players since 1965)". If you have a spare second, send them this column with a short note asking what they think can be done.

fifa, world cup 2022
30 comments about "What soccer can do to pressure Qatar ahead of the World Cup".
Read more comments >
Next story loading