Sebastian Saucedo on playing for UNAM Pumas, his rise with Real Salt Lake, and aiming for the Olympics

California-born Sebastian Saucedo made his MLS debut with Real Salt Lake at age 18 in 2015. Since then, he played on loan for Mexico's Veracruz, appeared for the USA at the 2017 U-20 World Cup, logged more than 80 appearances for RSL, and joined UNAM Pumas in 2020. After appearing in 10 Liga MX Clausura games, scoring once (in his debut) and assisting twice, Saucedo was injured for most of the 2020 Apertura season but returned with two appearances off the bench in the semifinals during Pumas' runner-up campaign. Saucedo, who was named to the USA's U-23 roster for the 2020 Olympic qualifying tournament that was postponed because of COVID-19, was named to Coach Jason Kreis' 31-player training camp roster, which will be pared down to 20 players for the rescheduled tournament, March 18-21 in Guadalajara. 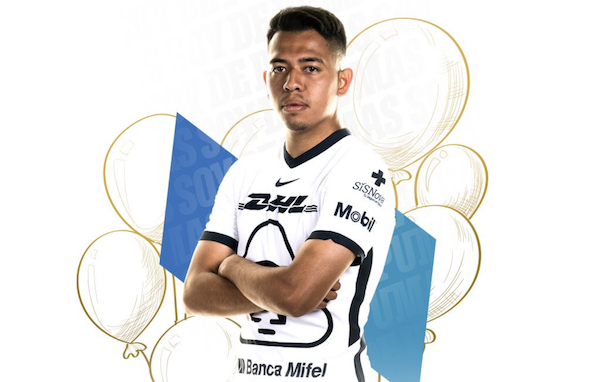 The USA will face Costa Rica, the Dominican Republic and Mexico in Olympic qualifying group play. The top two finishers in the group reach the semifinals, whose winners qualify for the Olympics in Japan.

SEBASTIAN SAUCEDO: It’s a big responsibility for the U.S. to be in Tokyo. We’re known for our athletes. We haven’t qualified since 2008. We’re known as one of the best sports countries in the world. There’s a lot of good teams and we’re in a very tough group. We have to be together to be able to qualify. Every game’s a final to make it to Tokyo. We can’t sit back, because it’s do or die.

On facing host Mexico on its turf ...

SEBASTIAN SAUCEDO: COVID has changed everything. There may not even be fans at the stadium in Guadalajara. There’s pressure always. What we can control as a team is to be prepared for that first game and then the other one and the other one. At the end of the day, it comes down to how well we prepare for it.

Saucedo became part of the U.S. national team pool since taking part in a Manny Schellscheidt-run U-14 ID camp in 2010 while playing for Utah club La Roca.

SEBASTIAN SAUCEDO: My experience with the national team has always been great. I’ve been on the national teams since I was 14. Sometimes I’d get cut, then I’d get back on. I went to the U-20 World Cup with Tab Ramos as coach. We won Concacaf qualifying. There have been really good moments with the national team. I’m always honored to represent the country that has given a lot to me and my family.

I love seeing my teammates succeed, no matter what. Brooks Lennon, we’re both from RSL, and we were roommates, even when we were fighting for the same spot. That’s someone that I call my brother. I talk to him almost every day and we still have our friendship. In this sport, you meet different people, players around the world, and sometimes soccer becomes a business. But I’ve built relationships with teammates. Brenden Aaronson was just with us, the U-23s, and now he’s in Europa League games. I went to a U-23 camp with Gio Reyna. He was the youngest player there. Now he’s doing the same things he would do in our training sessions in Europe.

Although he once accepted a Mexican youth national team invitation, Saucedo says his dual-national situation differs from that another USA-born Mexican-American, Efrain Alvarez, who was listed on the preliminary Olympic roster for both the USA and Mexico.

SEBASTIAN SAUCEDO: I did go through something like that. I went to one of Mexico’s camps when I was younger and tried out. It was nothing like home. My parents are Mexican, but my family hasn’t been there since before I was born. That’s more than 25 years. The USA is home. For Efra and his situation, that’s different. He went to the World Cup with their U-17 team. Maybe he feels like Mexico has given him those opportunities and support since he was younger. Maybe if Mexico had been knocking at my door since I was 14 and had given me opportunities since then, it would have been different for me. But it wasn’t like that. 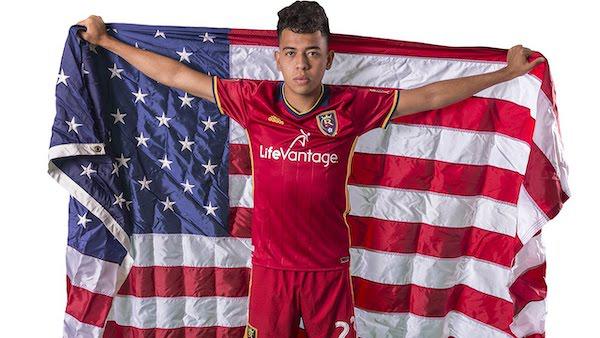 Sebastian Saucedo, who helped RSL-Arizona's U-16s win the 2013 U.S. Soccer Developmental Academy national championship and finish runner-up in 2014, has been a part several U.S. youth national teams, including the 2017 U-20 World Cup team.

SEBASTIAN SAUCEDO: Freddy Juarez and Martin Vasquez are two role models that I look up to, to this day, because of their time and dedication to all of us at the academy. Freddy and I would clash heads, we’d argue all the time. He’d tell what I’d have to do to be a better player, to do this, to stop doing that. Now we laugh at what we’d argue about, but they both did so much. It was the love that they had for us kids to be successful.

For the owner, Dell Loy Hansen, to buy in as well was something big, to invest in these kids. They built a school for the kids, indoor soccer fields, dorms, gyms, more fields. It changes your point of view. The kids here, they get our leftovers from the first team. Even though Pumas is a big club in Mexico, they’re limited. The youth teams are not gifted as many resources as RSL Academy. I took that for granted when I was young.

On coping with a hamstring injury, when Pumas was in contention for a title ...

SEBASTIAN SAUCEDO:It definitely gets you thinking, what’s life after soccer? I was out for more than two months. I was able to come back for the last part of the playoffs. You miss the most exciting part, which was to get to the playoffs in the first place. It was the toughest thing that I’ve gone through in my career, because I’d never been injured that badly before. It made me evaluate a lot of things, like how to avoid injury, how to come back, what do you do off the field to maintain yourself at a higher level? I look back and think, you have to look at life without soccer.

What a professional athlete's life is like during the pandemic.

SEBASTIAN SAUCEDO: Like everyone else, we didn’t think the pandemic would happen or that we’d be this long without a cure for COVID. If we look back on what we took for granted before COVID, you realize nothing is forever. The pandemic affects everyone around the world. I can only imagine what it’s like for people who lost jobs. We still have jobs, even if we had salary reductions.

On playing in empty stadiums because of COVID.

SEBASTIAN SAUCEDO: We’ve adjusted without fans. It does feel like you’re going into a scrimmage. Here in Mexico, that’s one of the most important things - the fans. You have a lot of pressure when fans come to watch you and it’s the same for the rest of the team. Especially our club, because we’re really close to our fans and that gives us a plus one. It feels like a scrimmage without them. For us, it was different, because we got all the way to the final and we can only imagine what that would have been like with our fans pushing us in the final, experiencing a final with us, because we were on the verge of being champions.

During his five MLS seasons with Real Salt Lake, Saucedo played parts of two seasons on loan to Veracruz, for which he came of the bench in its Supercopa MX final loss to Chivas in 2016 and made four starts (scoring once) during its 2016 Copa MX Clausura title win. He's played 18 games in all competitions since joining Pumas.

SEBASTIAN SAUCEDO: I’ve had two major injuries during my time at Pumas, and I’m recovering from the last one now. I love it here. I feel like Pumas was able to see what I was able to give before COVID started. I started all the games before COVID hit. I was playing very well and when injuries happen, they happen, but teams really show how much they believe in you. For me, I’m happy here and hope to stay for a long time. ... I want to be that starter again that I was when I first got here. 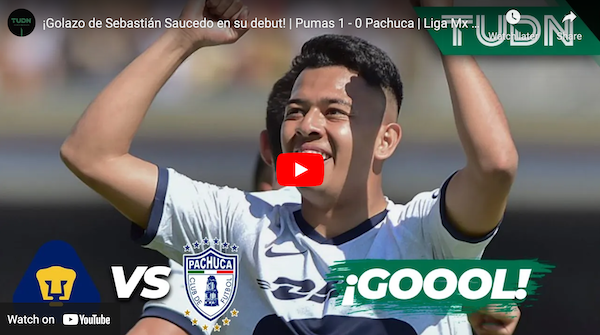 Improving while with Pumas.

If you’re a technical player, it’s easier to adjust to whatever style coaches want, but the physical part is so important. We have a philosophy here at Pumas where you have to run more than your rival. At Salt Lake, I wasn’t as physically fit and not as good defensively. I’ve gotten that criticism and that’s something I’ve learned to improve here. You also have to be healthy. Ever since I’ve gotten here, I’ve taken care of my diet and with those other improvements, if I’d done this back in Salt Lake, I can only imagine how good I would have been in the MLS.

SEBASTIAN SAUCEDO: No one’s sacrificed more for me than my dad. He’s always wanted his own soccer club and he’s now got a youth team in Park City. It’s awesome. I love to see my dad do that. When I was hurt, I was helping him set up his website, Instagram. I was able to get Nike to sponsor the club. If I couldn’t play, I’d love to stay in the business of soccer.

On his old nickname, and his new one ...

SEBASTIAN SAUCEDO: Bofo is after a player in Mexico, who played for Chivas [Adolfo Bautista]. I used to shave my head when I was younger and I played for Little Chivas in Salt Lake, but I don’t go by that name over here. It’s just Seba, Sebas, Sebastian. Jason Kreis always calls me Seba. I prefer that over anything else.

men's national team, mexico, olympics
1 comment about "Sebastian Saucedo on playing for UNAM Pumas, his rise with Real Salt Lake, and aiming for the Olympics".
Next story loading