Last year, Barnsley was in a relegation battle in the English Championship and it only narrowly escaped by one point thanks to wins in its last two games. This season, however, the club has found itself in a remarkable promotional race thanks to its current six-game winning streak that has it just one point outside the promotional playoff position. Barnsley also has a game in hand on the two teams it is chasing. 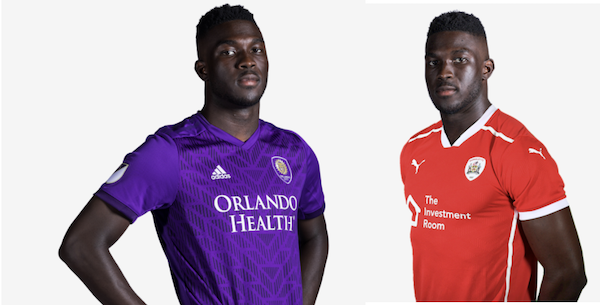 American forward Daryl Dike arrived at Barnsley on loan from Orlando City at the end of January, the day after he earned his first cap in the team’s 7-0 win over Trinidad & Tobago on Jan. 31. While the 20-year-old Dike did not contribute much on the field in that game, his mere appearance qualified him under the new post-Brexit rules for a U.K Work Permit. The next day his loan to Barnsley was announced, and the Oklahoma native will remain there for the remainder of the second-tier club’s season, from which three clubs will earn promotion to the Premier League.

Dike has justified the interest in him – both in terms of the numbers he put up in 2020 in his first professional season and with his unique physical characteristics that simply make him physically difficult to stop. At 6-foot-2, 220 pounds, Dike brings with him size and strength, but also mobility and unique degree of skill.

“I think obviously looking at me, people say -- a hold-up striker, a big guy, he uses his body, he's athletic,” Dike explained. “For me, I am a bigger player. I like to use my athleticism. I like to use my size when I play. I think that was one of the many things the coaches had me do -- tweak my brain to not only enhance that, but add other things, the technical side, the vision. The coaches have definitely done a good job at helping me add elements to my game.”

At the start of 2020, Dike entered the MLS SuperDraft after completing two seasons with the University of Virginia, where he led the team to the national championship game before losing to Georgetown. In MLS, the draft system has been declining in importance due to most teams focusing on Homegrown players. But for Dike, he was one of the winners of the draft despite falling to fifth place. Landing in that spot, he was selected by Orlando and was coached by Oscar Pareja. One of the top coaches in MLS, Pareja has experience working with young players and it was there Dike blossomed as a player.

Dike’s goal vs QPR for a 1-0 Barnsley lead pic.twitter.com/CDNpYj02Z9

Not just using his size and strength, Dike also showcased mobility and touch to the point where he scored eight goals and four assists over just 1,224 minutes in a shortened season due to COVID-19. That help land Orlando City in the postseason for the first time since its 2015 launch. It won its first postseason game – a stunner against New York City FC.

Now at Barnsley, Dike has been an important part of the team’s current run and the club has accumulated all 18 points in which Dike has played. During that course, Dike has scored two goals for the team and has made four starts. His physical presence has been a big story at Barnsley where Dike has been able to be physically imposing in a league that is among the most physical in the world.

Congrats to Daryl Dike on scoring his first goal for Barnsley. Way to represent @OrlandoCitySC @mls and the #USMNT pic.twitter.com/sKmSSCBj7c

After scoring the opening goal for Barnsley in Wednesday’s 3-1 win over Queens Park Rangers, Barnsley will host Birmingham City on Saturday. A win could see it move potentially as high as fifth. Moving inside the promotional playoff positions and being in contention for a Premier League spot is enormous for a Barnsley team that has spent a single season in the top flight in its 134-year history. The club operates on a low budget and is co-owned by American Billy Beane, who is known for his work as a Major League Baseball general manager but has applied his famed “moneyball” approach to soccer over the past decade with various clubs in Europe.

While Dike is proving to be a very important addition to this unexpected promotion push, his future is both bright and wide open. In May or June, he is scheduled to return to Orlando as his loan will expire. The odds of Barnsley being able pay what Orlando City would want for him are slim to none. Even with promotion, Barnsley will remain a low spender and will look to avoid long-term expensive contracts due to the odds of an immediate relegation being high.

The clubs that are most likely to meet Orlando City's demands are Premier League teams or possible stable teams in other top leagues. To get onto their radar, Dike will need to continue to produce and showcase himself as player with a unique skillset. Fortunately, the promotional race in the Championship is well-followed and when combined with his season in Orlando, he’s checking all the right boxes.

There is also the national team front. As a dual national, there were some questions about which country Dike would play for as his brother, Bright Dike and his sister, Courtney Dike, both played for Nigeria’s national teams. Courtney played in the 2015 Women’s World Cup.

Dike erased some of those concerns having played with the U.S. team at its two most recent camps. With his success in February, a March call-up seems likely. This summer Dike could also feature for the U.S. team at the Olympics as he remains age-eligible for the current U-23 team.

“In terms of Daryl, we would most likely use the forward position in a different way if he was on the field because he is such a physical presence,” Gregg Berhalter said in December. “He's a guy you need to get the ball to. ... I can imagine that when he's on the field, we would look to get him the ball in the penalty box more -- either back to goal or on the crosses to draw in defenders and perhaps lay off or take them on himself.”

The U.S. player pool continues to expand and Dike is part of that. The current forward pool last year seemed limited to Josh Sargent, Jozy Altidore and Gyasi Zardes. But Dike along with Matthew Hoppe, Jordan Siebatcheu, Jesus Ferreira, Sebastian Soto, Jeremy Ebobisse  and Ayo Aikinola are part of a new emerging core.

Dike has passed a lot of tests since getting drafted just over 13 months ago. And he's in the heat of a promotional playoff race to the biggest league in the world -- in the year the USA starts World Cup qualifying. That makes him an emerging player at a very important time.