European club soccer stands at another T-junction between money and tradition. Once more the richest clubs, led by Juventus Turin's president Andrea Agnelli, have been pressing Europe's soccer governing body UEFA for the next reform of its Champions League (UCL). The threat always hanging over these negotiations? If you don't accede to our latest demands we will break away from UEFA and form our own Super League.


UEFA's executive committee will vote next month on the proposals, which would see the Champions League expanding from 32 to 36 clubs from 2024, with each team guaranteed 10 games. The current six-game group phase would be abolished and replaced by a single league table, with the top 16 teams progressing to the knockout rounds. First-place would play 16th place, 2nd would play 15th, and so on.

The teams placed 17th to 24th would join the knockout phase of the Europa League. The four extra spots could be allocated to teams with 'historic' UCL credentials -- that is, a back door for old friends who've fallen on hard times.

"STOP UCL REFORMS" read a banner hung from the stands at Dortmund's Champions League round of 16 tie with Sevilla last Tuesday. It was the work of a Dortmund fan group, placed in full view of the cameras with the approval of the club's director Hans-Joachim Watzke, who in turn had to convince UEFA that the 'feedback' should be displayed in the interests of democracy. Watzke himself favors the UCL reforms, "in order to prevent a breakaway Super League." Fans of Bayern Munich, though, have joined their Dortmund counterparts in demanding a stop to the plans, and calling for a fairer distribution of UCL-generated TV revenue to non-participating teams and countries. 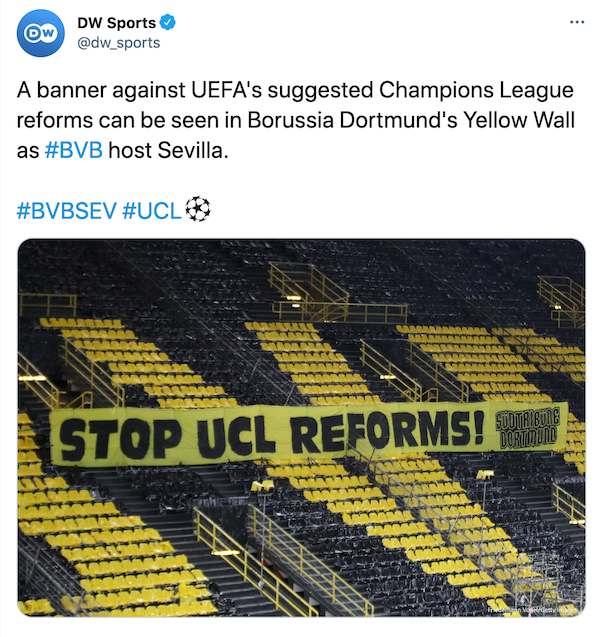 The villains of the story, Juventus, also had a Champions League game on Tuesday night, against FC Porto, one of those undesirable and unfashionable teams that insist on showing up and demanding their right to play the game. It was a cracking night of swinging fortunes and pure theater, personified by Porto's defender Pepe, who seemed to be acting out an off-the-ball five act play of his own. After a thrilling bout of overtime, 10-man Porto went through on away goals with the score over two games at 4-4. It's the kind of game and result that Juventus, with UEFA's complicity, wants to eliminate in the name of guaranteed income.

Long forgotten is all the talk from one year ago at the start of the pandemic about solidarity, sane financial planning, lower wages, and the overall good of the game. UEFA's biggest clubs, lobbying through their powerful European Club Association (ECA), want business as usual, plus benefits and bonuses. In a way, you can understand why. They've managed to monopolize and de-value their domestic leagues precisely through their increased wealth and their lack of solidarity. Paris Saint-Germain, Bayern Munich and Juventus have been the perpetual champions in their respective countries for the past decade. To feed their own greed, they need more games against bigger opponents -- that is, against each other.

If only it weren't for those pesky fans who insist on resistance. At a meeting last week to discuss the reforms, hosted by the Association of European Professional Football Leagues (EPFL), the executive director of the supporters' body Football Supporters Europe (FSE), Ronan Evain, asked an inconvenient question. "Who's going to profit from these reforms, from an increase in the number of games?" he wanted to know. "Certainly not the fans. Most fans don't want more football. Instead we want better football." More CL games wouldn’t solve any of the problems afflicting European soccer, he said, but would possibly make them worse. The real need is for a more level playing field in both domestic and continental club soccer.

The FSE has published a paper pointing out that the proposed reforms would "concentrate even more wealth and power in the hands of a dozen or so elite clubs from five or six Western European nations." This would undermine soccer's true beauty, which stems from its "simplicity and unpredictability." The body maintains that "we have repeatedly called for meaningful reform to make the game more sustainable from top to bottom. We want the game to be more European, more diverse, and more open, not dominated by a handful of clubs or countries."

The ECA, chaired by Juve's Agnelli, continues to pull in the opposite direction. Its pressure on UEFA remains the catalyst for reforms that will make the Champions League even more of a cash-generating, TV-centric spectacle with the same names year after year. A drawn out, overhyped, stitched-up competition where an unlikely victory of raw character over entitled royalty -- like Pepe and Porto's glorious downing of Juventus last week -- will become just another memory for nostalgics to recall with a stoical sigh.