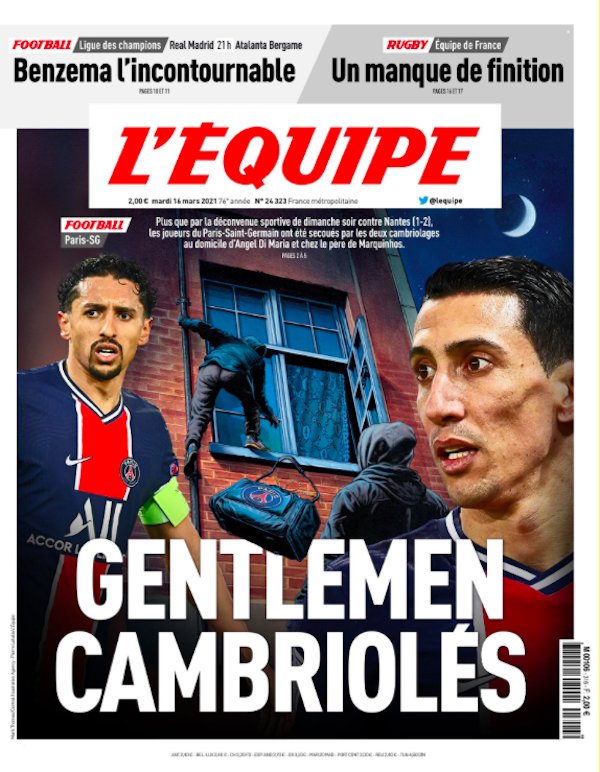 France has often been the setting for films and television shows about burglars.

Hitchcock's To Catch a Thief, set on the French Riviera, stars Gary Grant as John "The Cat" Robie, a former burglar suspected by police in a string of jewel heists.

Following the investigation into a string of burglaries targeting the homes of Paris St. Germain stars is like watching the brilliant French police series Spiral ("Engrenages") with the same judicial officers and same crimes and same locales, in northern Paris and the surrounding banlieues.

In late 2018, the homes of Thiago Silva and Eric Choupo-Moting were ransacked. The Brazilian had items valued at 1.2 million euros stolen -- including a 600,000 euro Richard Mille watch -- while Choupo-Moting, the German-born Cameroonian, listed stolen items worth 600,000 euros.

Mathieu Bonduelle, the juge d'instruction (think Judge Roban from Spiral) in the case, told L'Equipe that the crimes were meticulously planned. Police arrested eight suspects in the gang -- the ring leader was "Mohamed S." and dubbed "Le Chat" (yes, "The Cat") -- and the loot was stored in Aubervilliers, scene of the final hotel heist at the end of Spiral's eighth and final season.

Every few months, another burglary involving a pro player is reported across France. On Sunday night, the latest burglaries, involving two more PSG players, played out on national television.

Argentine star Angel Di Maria was pulled by his coach, Mauricio Pochettino, from PSG's home match against Nantes early in the second half after Di Maria'a wife discovered thieves had taken off with watches and jewelry later valued at 500,000 euros from a safe in Di Maria's home in Neuilly-sur-Seine. The burglars were unnoticed by Di Maria's family, which was in the house but on another floor.

The father of Brazilian defender Marquinhos was not so lucky. He was in the garden of their home in Chatou, about six miles from Neuilly-sur-Seine, feeding their dog when he was accosted by burglars, who forced him to open the house with Marquinhos' two sisters, ages 14 and 16, present. The burglars spent about 40 minutes in the home but did not find much: a couple of luxury suitcases and 1,500 euros in cash.

Police are investigating whether the two burglaries are linked to cases involving two other PSG players, Mauro Icardi and Sergio Rico, whose houses were targeted earlier in the year.

Who so many PSG players targeted? They are easy prey. They like to flaunt their wealth, wearing fancy jewelry and watches and driving fast cars, and live in wealthy neighborhoods. And they generally don't do a good job of protecting themselves.

As part of its protocols for new player signings, PSG hires a firm a conduct a security audit of their new residences (with recommendations on installing security cameras and alarms and locking vulnerable entry points). It also recommends players hire security guards, but few PSG stars have guards: Neymar, Kylian Mbappe and Di Maria.

Di Maria's guard was on duty in front of his home Sunday night. Which didn't do much good because the burglars entered and exited the house through the roof.