Once more, soccer flirts with tragedy

I return, yet again, and without apology, to the role of goalkeepers in the modern game. 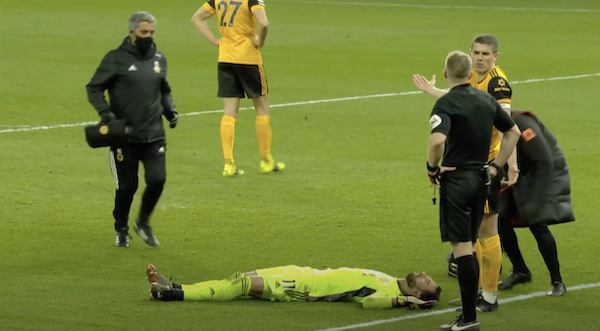 Once again there has been a very nasty injury: in the Premier League, Wolves keeper Rui Patricio took a tremendous wallop to his head from the knee of defender Conor Coady. And once again, we have soccer circling its already worn-out wagons, so anxious to convince everyone that this was a tragic accident, a freak, just one of those things, an occupational hazard in the life of a soccer pro. All very regrettable of course … but let’s not dwell on it, the game must go on.

Oh, really? Then how is it, gentlemen, that I have been confidently predicting just such an incident (and worse) for some years now? I have, maybe, a crystal ball? I talk regularly with a clairvoyant? I attend seances? Not guilty on any such charges. But what I do have, are two eyes connected to a head, enabling me to see very clearly what is happening in our sport.

Which is this: Goalkeepers, for more than a decade now, have been systematically permitted to flout the rules of soccer. Their play has been allowed to incorporate rough-house elements that will inevitably cause serious injury -- to the goalkeepers opponents, or to the goalkeepers themselves.

There are those who refuse to see that, or who choose to deny it by indulging in absurdly nit-picky, closed-eyes arguments. Quite a lot of them, actually. Sadly, that group of truth deniers includes all goalkeepers, all referees, and all the FIFA and IFAB Lord High Muckety-Mucks who have so spectacularly failed to address the problem.

I accuse “all” of those people, because I’m not aware of even one of them speaking out against the situation.

During the past decade I have persistently pointed out that when a goalkeeper dives at an opponent’s feet (an every-game occurrence) he is breaking the rule against dangerous play. He is lowering his head to where the feet are powerfully active. What does any sensible person see as a likely result of that action? The goalkeeper is clearly “playing in a dangerous manner” that “threatens injury to someone (including the player themself)...”

Goalkeepers, incredibly, seem to feel that it’s OK to endanger themselves and opponents. They are evidently too impressed with the notion that they are being “brave” than to think seriously and sensibly about what they are doing.

Of course, they are taught to play in this way, to throw themselves into boot-swinging melees, or to simply smash into opponents, to “clean them out.” Though, curiously enough, I have yet to encounter a goalkeeper instructor who admits to encouraging young players to play so dangerously.

Referees, of course, are never heard from. So it remains a mystery how so many, for so long, have been inviting dangerous mayhem on the field by using one set of rules for field players and another more lenient, and totally imaginary, set for goalkeepers.

As it happens, the injury to Rui Patricio has a couple of unusual features. The player who injured him, Conor Coady, is a Wolves defender, a teammate, not an opponent. And there is a VAR involvement: this was a case where a possible offside call was delayed until the play was completed. Had the flag been raised at the time of the offense (before the collision) -- well, there would likely have been no collision.

Those factors will, of course, allow the know-nothings to insist that this was a one-off aberration. Just how far the sport has gone in permitting dangerous play was nicely evidenced by the telecast. For a start, the collision wasn’t even noticed by the commentators until the medics came galloping onto the field. We got one replay ... and that was it. No more close-ups, indeed no coverage at all of the treatment -- which went on for some 15 minutes on the field. 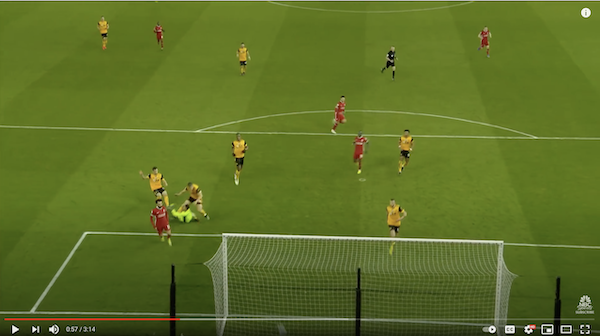 So when the bitter fruits of soccer’s own blindness produce the inevitably unpleasant viewing, the cameras are switched off for fear some viewers might be upset. Really, there seemed little to get squeamish about. No blood, just a player being given oxygen and being very carefully maneuvered onto a stretcher.

All the while, commentators Bill Leslie and Andy Townsend, no doubt desperate for something to tell us, kept going on about this “accident,” wishing Patricio a speedy recovery, and extolling just how marvelous the treatment is these days -- thanks to the protocol. They kept this up for 15 minutes. No doubt, everything they said praising the treatment that Patricio would receive was correct. But it was also deeply misleading.

Back, way back, in my boyhood times, the phrase “Prevention is Better than Cure” was prominent. I don’t recall who was using it -- hospitals? nurses? drug manufacturers? -- no matter, it seemed like a sensible bit of thinking.

The phrase isn’t much used today. A pity, that, for it’s exactly what soccer needs to straighten itself out and start making sure that it is doing all it can to ensure the safety of its players.

At the moment soccer is doing nothing to reduce the possibility of concussions. That’s right, nothing. They have distorted the phrase, and expect us to be duped into believing that “Cure is Better than Prevention.” So they like everyone to hear about their “protocol” and how magnificent it is. We watch, and find that the protocol is employed in a rather slapdash way, but is undoubtedly a plus when applied seriously.

But that is cure -- strictly, the province of the medics, not soccer. Soccer should be working on prevention. It should be taking a long, hard look at the way soccer is played, and the way in which it is refereed. Like it or not, that could mean some rule changes -- small, or possibly quite major -- but rule changes designed to minimize the number of concussions, not their treatment.

We now face an absurdity. We realize that rule changes are not necessary. The condemnation of dangerous play is already in the rule book, has been there for as long as I can recall.

As for the violent and reckless charges used by goalkeepers trying to “clean out” opponents in the penalty area, they are already covered in Rule 12 and should always be punished with a penalty kick. At the moment, they are rarely even whistled, never mind severely punished.

When serious injury is foreseeable, when measures can be taken to reduce, maybe eliminate the danger altogether and when those measures are not taken we are most definitely not talking about accidents.

If, as I am claiming, these are not accidents, then we have ugly injuries which anyone involved in the sport should -- must -- have realized were just waiting to happen. The big question is, how come no one -- not a referee, not a goalkeeper, not a coach, no one - has raised the alarm?

There is responsibility here -- blame, to use a more brutal term for this shocking refusal to face up to a patent blemish on the sport.

Pleading ignorance of the situation won’t do. The sport has a long history of serious injuries involving goalkeepers. And, remember, we only hear about the ones involving pro players from the top soccer countries.

Within the past two years, I have recorded two nasty collisions involving goalkeepers in youth soccer -- one in England, one in New York. In one, it was the goalkeeper who died, in the other it was the goalkeeper’s adversary. Does anyone imagine that I was clever enough -- or industrious enough -- to have discovered all such incidents? I have no stats from India or Africa or Central America.

I also have a melancholy stat from 2017: the death of Choirul Huda. You’ve never heard of him? No, you wouldn’t have. He was a pro player, a goalkeeper, a well-known veteran player in his native Indonesia. We don’t hear much about what happens in Indonesia, now do we? 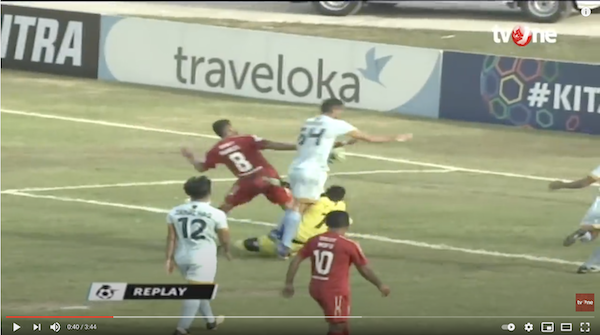 Choirul Huda threw himself into a goalmouth melee to snare the ball -- when one of his teammates, trying to belt the ball away, violently kicked Huda: chest trauma, head trauma, neck trauma. Huda was dead within an hour.

Oh yes, there’s clear blame in these situations. It’s easy enough to single out the individuals. But who wants to blame Choirul Huda for causing his own death, or Rui Patricio for getting himself seriously injured?

Sure, both were at fault by lowering their heads into an area where the feet were flying -- the rule against dangerous play forbids that. But the sheer inhumanity of such an accusation against injured players rules strongly against it. Rightly so. Pointing the finger at Huda and Patricio gets us nowhere. They were simply doing what they have been doing for all of their playing careers. No one had ever told them they were doing anything wrong. No referee had ever blown a whistle the moment they launched themself head-first at an opponent’s feet.

With referee involvement we are getting closer to the real culprits in this squalid affair. But the blame goes deeper than the referees, They, in turn, are also just “doing their job” the way they’ve always done it.

So who am I blaming for these recurrent tragedies that stalk the game? Not the players. Nor the referees. But the guys in command. That means, specifically, IFAB, the sport’s rule-making body, and FIFA, the overall lord-and-master of all it surveys in the sport.

That is where the leadership, the willingness to clean up the sport must come from. Instead there has been nothing but silence and ignorance. This is a very serious business. For a start, it displays a callousness to player safety that no sport should permit. And when the legal challenges arrive, as they surely will, these leaders who failed to lead will have a lot of damaging questions to answer.

FIFA, during its growth into a major business corporation, simply lost sight of the game’s intrinsic values. Finance was all that mattered. The corruption and the financial scandals followed, as did a total collapse of anything that looked like leadership.

But FIFA’s bowing down to mammon does not apply to IFAB. While FIFA was racing around making money and breeding fraudsters, IFAB was simply doing nothing. Goalscoring slumped in the sport, which became more defensive, refereeing did nothing to counter the trend, so the physical element of the game was granted more tolerance. The trends, rather too quickly becoming facts, were ignored as IFAB dozed on.

I have, in the past, suggested -- far too timidly -- that the dangerous play rule should be rigorously enforced against goalkeepers. That has now become a must. Yes, goalkeepers will have to adjust. Well, so what? It is surely a small price to be paid for avoiding serious injuries, even death, on the playing field.

I mean, requiring a sport to enforce its own rules? How big a deal is that?

But banning goalkeepers from diving at an opponents’ feet would be a big deal. It would signal a major shift in the sport, would tell the world that it is prepared to put player safety before the sanctity of its rulebook. A humane FIFA? Sounds a bit far-fetched, doesn’t it?

But it is something that must happen. Weeping crocodile tears at “unfortunate accidents” is no longer a tenable attitude.