After a toothless first-half performance, the USA found its groove and got a boost from the bench to down the Dominican Republic, 4-0, in its second Olympic qualifier after opening with a 1-0 over Costa Rica. Coach Jason Kreis' team wraps up group play on Wednesday against Mexico. 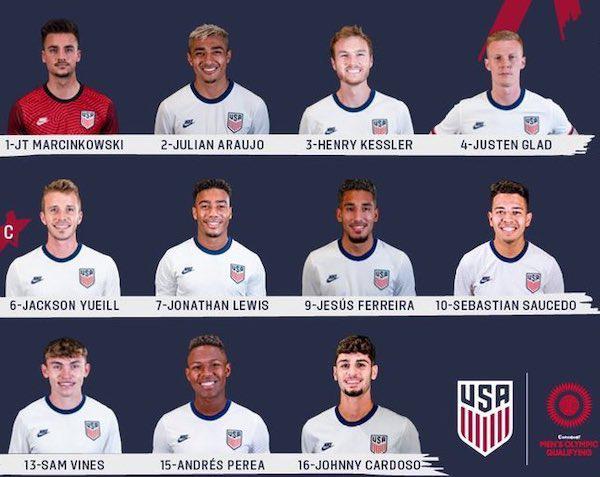 JT Marcinkowski, who took over in goal after David Ochoa's brilliant performance against Costa Rica, wasn't required to make a difficult save.

Central defenders Henry Kessler (who replaced Mauricio Pineda) and Justen Glad kept the Dominicans from threatening and enabled the U.S. midfield to focus on offense. Right back Julian Araujo (a late sub against Costa Rica) ramped up his forays in the second half and initiated the attack that led to the first U.S. goal. Sam Vines, whose 20-yard volley went wide in the late in the first half, horribly overhit cross in the 59th minute but fine-tuned his passing afterward.

Johnny Cardoso headed straight to goalkeeper Johan Guzman on the USA's best first-half chance and hit the crossbar from eight yards in the second half, but the latter put the Dominicans on their heels before conceding the first goal. Jackson Yueill, with a savvy finish, opened the scoring for the USA, and took part in the buildup for the second goal with a pass to Djordje Mihailovic. Andres Perea hit some crisp one-touch passes and his quick reaction to the rebound from Cardoso's shot to the crossbar got the ball to Sebastian Saucedo to set up Yueill.

Several promising forays by Sebastian Saucedo in the first half fizzled with misplays. He missed from eight yards in the second half, but produced the setup for the USA's first goal. Jonathan Lewis failed to deliver service from the wing, such as early in the second half when he impressively dodged past of pair of defenders only to bang his pass off a third. Jesus Ferreira, who scored gamewinner against Costa Rica, got replaced at halftime after an ineffective 45 minutes.

Djordje Mihailovic came on in the 62nd minute and assisted on two Hassani Dotson goals before tapping in the USA's fourth goal after the perfect pass from Benji Michel. On Dotson's second goal, to make it 3-0, Sebastian Soto smartly laid the ball off for Mihailovic. Dotson scored with perfect placement on his first and significant power on the second.

TRIVIA: Hassani Dotson, 24, was the 31st overall 2019 MLS draft pick out of Oregon State by Minnesota United, for which he's made 45 appearances, mainly as defensive midfielder, and has four MLS goals and one assist.

NOTABLE: Men's Olympic soccer is an all U-23 competition during qualifying play. For the Olympic tournament, each team is allowed to add three overage players. This year's Olympics are U-24 (born in 1997 or later) because the original age cutoff for the postponed 2020 Games remains in place.