Having already advanced to the semifinal that will determine whether it reaches the Olympics, the USA fell 1-0 to tournament host Mexico in their final group game -- following wins over Costa Rica (1-0) and the Dominican Republic (4-0). Coach Jason Kreis' team's performance on Wednesday -- despite the loss and far from flawless -- revealed enough qualities to create optimism for victory against Sunday's opponent, whether it be Canada or Honduras. 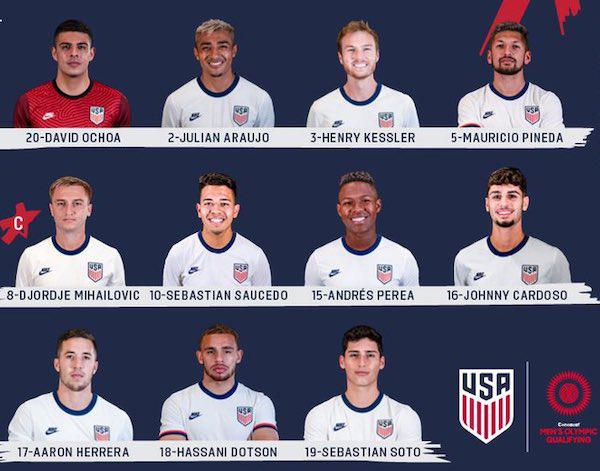 David Ochoa confidently handled a cross in the 11th minute, dealt well other threats besides the goal that was perfectly placed with power just inside the post, and adeptly played several back passes with his feet. (He even did a Cruyff move to evade Uriel Antuna.) His yellow card for forearming Johan Vasquez bordered on self-defense.

How central backs Henry Kessler and Mauricio Pineda played out of Mexican pressure, especially early in the game, diffused what the Mexicans may have banked on as a major weapon. Pineda pulled off a perfect slide-tackle on Johan Vasquez in the penalty area in the 28th minute. Kessler's 81st-minute tackle also looked risky but also proved clean and successful. Considering how often they were tested, the U.S. defenders, even if not perfect, impressed with their passing. Outside backs Aaron Herrera and Julian Araujo balanced the obligation to attack required by the U.S. system with covering defensively against a Mexican well-equipped to exploit out-of-position defenders.

That the USA managed 49% of the possession speaks well for its midfield, but the trio failed to control the game for any extended period time while saddled with defensive duties. They all did OK with defense, especially Andres Perea. The scorer of two goals against the Dominican Republic, Hassani Dotson, was unable to break through as he did against the tiring opponent he destroyed four days earlier. Johnny Cardoso likewise helped connect the back and frontline on occasion but was also more of a defender.

Djordje Mihailovic came closest to being a U.S. playmaker but suffered under the lenient refereeing of Daneon Parchment -- the only person watching the game who may not have noticed the Mexicans were targeting Mihailovic with foul play. Mihailovic still managed to provide enough forward play to keep the Mexicans from focusing only on attack. Sebastian Saucedo looks like he's on the verge of greatness in search of a missing ingredient. So often he builds up expectations and disappoints with his final move or pass. Still, Saucedo's persistent forays kept the Mexicans on edge. The bad luck boy of the day was Sebastian Soto, who didn't get much chance to do what he's there for -- score -- but gets on the highlight reel for a bad pass that Antuna exploited to score the game's only goal. One is left wondering whether it was his decision or part of the Kreis system that a center forward is passing the ball deep in his own team's half.

The subs, and Jesus Ferreira especially, kept the game interesting as the USA pulled off some its most creative attacks late in the game -- and credit to the USA for not going silently into a loss. They risked a bigger defeat by going for the equalizer. A swift movement downfield in stoppage time got hopes up, but Tanner Tessmann nearly sent the ball out the stadium with his shot.

TRIVIA: Mexican goalscorer, the 23-year-old Uriel Antuna, has 8 goals in 16 games for Mexico's full national team. One of them came in a 3-0 friendly win over the USA in September 2019 in New Jersey. He scored six for the LA Galaxy in 2019 before joining Chivas Guadalajara.

NOTABLE: Referee Daneon Parchment didn't show a yellow until U.S. keeper David Ochoa and Mexico's Johan Vasquez clashed in the 84th minute -- despite this being a game with 40 fouls.