Olympic Qualifying: 'The most important game is coming' for USA 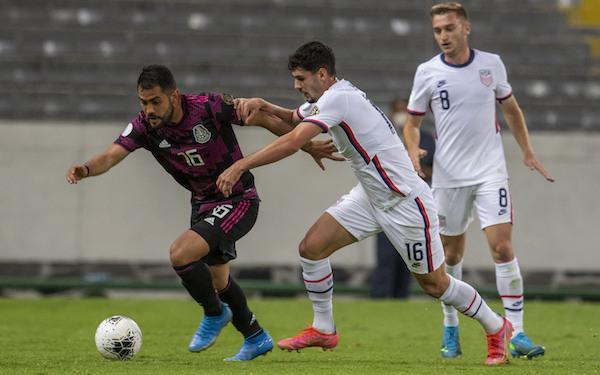 The USA lost to Mexico, 1-0, in their final group at Concacaf Men's Olympic Qualifying, and if the result did not matter -- both teams were already through to Sunday's semifinals -- how the USA lost was still hard to swallow.

After surviving Mexican pressure through the first half and starting to settle into the game, the USA conceded the game's only goal in the 45th minute.

Center forward Sebastian Soto came back into midfield to take a pass from defender Henry Kessler, but his back-pass was intercepted by Uriel Antuna, who was off to the races. The former Galaxy winger ran straight at the U.S. backline and beat goalkeeper David Ochoa with a right-footed shot for the first goal the USA has conceded in the tournament.

“Ultimately difficult to lose the game on an individual error,” U.S. coach Jason Kreis said. “The most important game is coming, so we need to move forward very quickly and prepare ourselves for that.”

How the USA handled the Mexico press was always likely to decide the match, and Mauricio Pineda and Kessler, the second-year pros teaming up at center back, did a decent job of playing the ball out of the back.

Ironically, the game turned on a play when Soto had all kinds of time to control the ball.

"He tried to play a first-time pass," said Kreis, "and got intercepted."

More problematic was the USA's continued inability to create any sustained attack, particularly on the wings.

“We saw really bright spots," Kreis said. "I think we also saw spots where we were like, wow, these guys are still rusty and still making mistakes that you don’t typically see them make in passes and movements.”

olympics
3 comments about "Olympic Qualifying: 'The most important game is coming' for USA".
Read more comments >
Next story loading