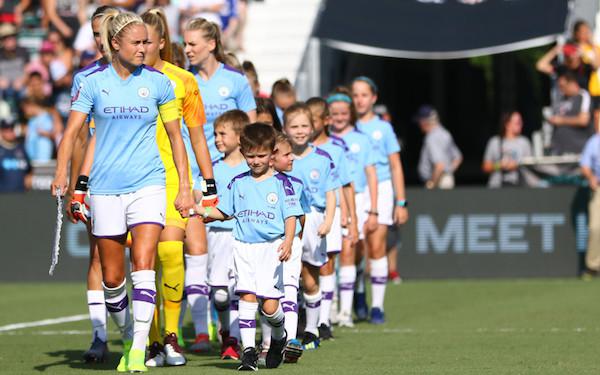 On the field, England's FA Women's Super League is a step behind the top women's leagues of Europe.

Since the UEFA Women's Champions League was launched in 2009, no WSL team has ever reached the final, and this week's first-leg results for the two WSL quarterfinalists were mixed: 3-0 loss for Manchester City at Barcelona and 2-1 win over Chelsea at home against Wolfsburg.

But off the field, the WSL continues to dominate.

This week, the league, operated by the Football Association, announced it reached a three-year agreement with the BBC and Sky Sport for broadcast rights worth upwards of 8 million pounds ($11 million) a year.

The key to the deal is getting games on free-to-air TV --  a minimum of 18 shown on BBC One or BBC Two -- in addition to those on Sky Sports -- 44 games on its Main Event, Premier League and Sky Sports Football channels. (Games not on BBC or Sky Sports outlets will stream live on FA Player.)

"This is a landmark deal, not just for the WSL but the whole of the women's game," the Football Association's Kelly Simmons said. "It is one of the biggest deals commercially, definitely for women's football in terms of a domestic deal, and up there for women's sport," . "We have benchmarks for what we think are the most successful, high-profile women's sport leagues in the world like the WNBA and the NWSL, and they are low hundreds of thousands in terms of an average peak per week. We anticipate this would significantly be above that."

The record television audiences for the 2019 Women's World Cup across Europe were boosted by prime-time coverage on free-to-air networks. (The WSL's main Saturday game is expected to kick off at 6:15 p.m.)

The WSL is also in the final year of an agreement with Barclays, its first title sponsor. The three-year partnership was valued at 10 million pounds ($13.2 million).