The USA, which has not reached the men's Olympic soccer tournament since 2008, isn't going to the Tokyo Games either. Coach Jason Kreis' team fell, 2-1, to Honduras in the U-23 Concacaf Championship semifinal that determined one of the region's two qualifiers. 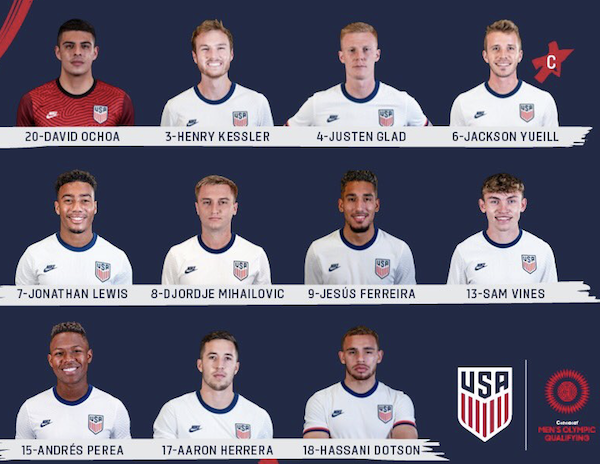 David Ochoa securely handled Honduras' high-powered long-range shots in the first half. On the first Honduras goal, the cross that Denil Maldonado relayed to Juan Carlos Obregon with a diving header was out of Ochoa's reach and his scramble to deny Obregon ended most unluckily. Ochoa, whose play in a 1-0 win over Costa Rica was a key reason why the USA reached this game that would determine an Olympic qualifier, gifted Honduras its game-winning goal with poor footwork after a back pass from Aaron Herrera.

Aaron Herrera seemed unaware of the urgency when behind him Maldonado blazed to reach the long ball he headed to Obregon to score the opening goal. Henry Kessler's fouls, including one that got him a yellow card in the 45th minute, showed how threatening Honduran frontline was. His central defense partner Justen Glad had his moments, such as the interception and good pass to spark a 22nd-minute counterattack. Herrera did surge down right wing but it bore no fruit. Sam Vines, the other outside back, failed to help out much in attack.

The vulnerability of a three-man midfield was exposed in a game where the opponent's frontline strength limited the U.S. outside backs ability to attack. As was the problem against Costa Rica, which the USA did manage to beat in the opener, a midfield without a true playmaker could not control pace of the game. Hassani Dotson, who scored twice in the 4-0 win over the Dominican Republic, came into the game with a sore ankle and didn't manage a shot. Jackson Yueill scored a wonderful goal to create a dramatic final 40 minutes and nearly inspired his team to an equalizer with his relentless play.

Center forward Jesus Ferreira only got the ball a couple times in Honduras territory in the first half. In the second half, he broke through impressively before passing to the wrong team. His unnecessary and sloppy foul in the 84th minute wasted more precious time for the USA's comeback quest. Djordje Mihailovic played only the first half, when the U.S. attack never got going. Jonathan Lewis's feet seemed handcuffed when he had a close-range chance to equalize in the 83rd minute. He also had close-range header that he struck straight ahead to a Honduran defender to block.

Of the subs, Tanner Tessmann provided the most spark, such as when he created a chance for Lewis after shedding his defender in tight space. Johnny Cardoso headed poorly when he met a stoppage-time corner kick.

TRIVIA: Coming into the game, Honduras was the only Concacaf nation to have qualified for the last three men's Olympic soccer tournaments. Now it's four straight. Honduras finished fourth at the 2016 Olympics and reached the quarterfinals in 2012.