Again and again, soccer lets bigotry off the hook

One major frustration for referees is not just that we have to put up with disrespect from players, coaches and spectators. It's also that when we write up disciplinary reports, that's often the end of the matter. Unless we're called to be witnesses at a hearing, we don't even find out what the punishments are for the miscreants, or if there's any punishment at all. Many of us suspect it's because the sanctions are almost always far too lenient.


A case that's hit the headlines in both Germany and abroad this month stands as a classic example. The coach of Borussia Mönchengladbach's reserve team, Heiko Vogel, was sent off during his team's fourth division game against Bergisch Gladbach at the end of January for "unsporting behavior." The game was being refereed by Marcel Benkhoff and two female assistant referees, Nadine Westerhoff and Vanessa Arlt. Details of Benkhoff's disciplinary report have been leaked to the media.

"Look at these three, what can you expect," Vogel said of the refereeing team, according to the report. When Arlt signaled to her colleague that Vogel should receive a second yellow card, Vogel remarked, "Yes, that was clear. You're such a who ... (pause)... horn. Women have absolutely no place on the soccer field." After he'd withdrawn to a spot just behind the technical area, he said loud enough for Arlt to hear, "Women should be banned from soccer."

His punishment from the all-male disciplinary court of the regional Western German soccer association (WDFV) was a two-game ban, a fine of €1,500 ($1,765), and -- most widely reported -- an order to coach at least six sessions of Mönchengladbach's women's or girls teams before the end of June. This latter 'punishment' was at the coach's own suggestion, in order to show his sincere regret and how much he really respects the women's game.

German national team captain Alexandra Popp then published a letter signed by all the players in the German women's league saying that "we don't appreciate it when somebody offers to make good their unsporting behavior by offering to coach women's teams for a few hours -- this judgment discriminates against all sportswomen." Furthermore, Vogel's comments during the game amounted to far more than mere unsporting behavior, they were "insulting and discriminatory." National team coach Martina Voss-Tecklenburg added, "We asked ourselves: for whom is this actually the bigger punishment? That something like this can still happen today just goes to show, to some extent, how women are still not properly accepted in the male-dominated world of soccer." 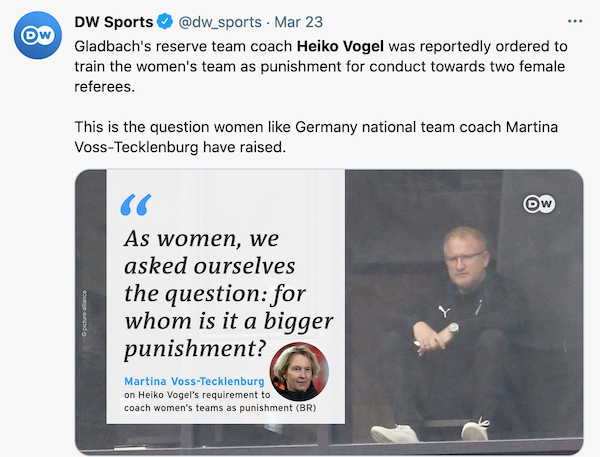 Following the public outcry, the WDFV has announced that it's decided to review the case. Whatever the new sentence against Vogel, you wonder why it still needs a public outcry before such conduct is properly condemned.

My youngest daughter, 22, is both a soccer fan and a player. In an admittedly unscientific poll over breakfast this morning, I asked her how she thought Vogel should have been punished. "His club should have fired him," she said, before adding, "then he should have been sent to a feminist yoga camp." It took her less than five seconds to come up with a verdict more sane, more just and probably much more effective than the WDFV's eight-man disciplinary court.

Borussia Mönchengladbach's website states: "We are tolerant, not prejudiced. We stand for equality, tolerance and diversity, and we reject exclusion and discrimination in all its forms." And yet, Vogel still has a job.

It seems that every club and sporting institution finds it very easy to compose or sign up to such statements, then place them all over hoardings, posters, jerseys and social media. Acting upon them, however, is always a different matter. It can be UEFA handing out mild fines and stadium bans in the face of racist chanting, instead of banning clubs and countries from competition. It can be FIFA's trite eyewash about human rights while colluding with dictators to organize lucrative tournaments that give autocrats free rein to sportswash their reputations. Over and again we hear grand words, followed by piffling sanctions or compromised measures that pay mere lip-service to the glib slogans about respect and sporting values.

It must be in the job description of all sports administrators to be timid, spineless, reactionary and utterly beholden to power. Bold decision-makers need not apply. Yet what we need is this: Fire Vogel. Ban Montenegro. Cancel Qatar. Without that kind of action, the bigots will continue to holler from the stands and the benches, and to suppress or crush human lives from the palaces of government. As witnessed through Popp's letter, Megan Rapinoe's speech to the House of Representatives Committee on Oversight and Reform, and the actions of both the Norwegian and German men's national teams this week, players are taking the lead. Soccer's clubs and governing bodies need to run with the times, develop a backbone, and finally start acting in line with the game's professed morals.