USWNT: Catarina Macario withdrawn from roster for European friendlies due to Lyon quarantine 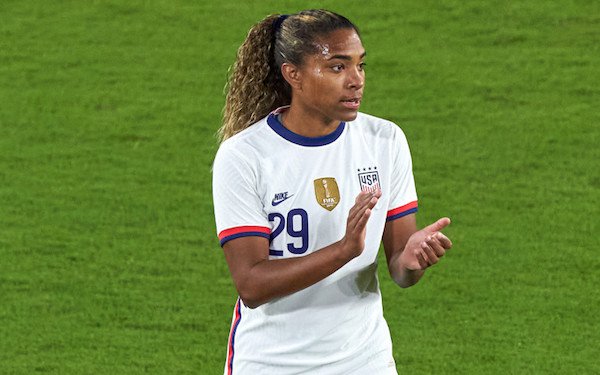 Another casualty of the COVID-19 quarantine at French giant Lyon: Catarina Macario.

The 21-year-old midfielder will miss the USA's friendlies against Sweden on April 10 and France on April 13 because she is in quarantine in the aftermath of the outbreak.

“While Cat has not tested positive, she is currently in the required quarantine period, and by the time she is able meet those requirements, travel to Sweden, and go through our Covid protocols, it would be right before the first game, and she wouldn’t have trained for a solid 10 days,” said U.S. head coach Vlatko Andonovski. “We only have a few trainings during this trip, so we felt it was in Cat’s best interest for her to remain in Lyon and make sure she ramps her fitness back up with her club once her quarantine ends.”

Lyon's UEFA Women's Champions League match at home against French rival Paris St. Germain on Wednesday was postponed by UEFA after a COVID-19 outbreak was confirmed.

Renard, Majri and Cascarino have been ruled out of the French national team's friendly matches against England and the USA. Like Macario, English star Nikita Parris won't play for the Three Lionesses in their April friendlies, but French coach Corinne Diacre included Amandine Henry, Sakina Karchaoui and Eugenie Le Sommer in her squad even though they are also quarantining because they are considered "close contacts."

Diacre's decision to include Henry, Karchaoui and Le Sommer was met with derision from Lyon president Jean-Michael Aulas, who termed the call-ups "unreasonable" and noted the Lyon positives were up to 10.

Diacre's relations with Lyon players have been poor. She took about Renard's captaincy after her arrival, and last fall Henry, the captain at the 2019 World Cup, criticized Diacre's handling of the team at the world championship, terming it "total chaos."