So U.S. Soccer is to implement concussion substitutions in 2021. Well, about time. I mean, that’s good news ... isn’t it?

Yes -- and no. Yes, because it will -- in theory -- mean that the “concussion protocol” will now stand a better chance of being properly and fully enacted. Instead of the hurried and almost perfunctory rigmaroles that we usually see.

No, because this is so obviously the wrong approach for soccer to take. The sport has a major concussion problem. It should be doing all it can to reduce the incidence of concussions. Instead it focuses on treatment -- on what happens after the concussion has occurred.

Because, at the moment, soccer is not tackling the problem at all. Concussions will go on happening in the sport, just as they have always happened -- and nothing is being done about it.

Of course the soccer powers-that-be -- FIFA, IFAB, the referees -- are well aware of the problem. They choose to ignore it. So ugly head-clashes will continue. I’m reminded of a moment, some 28 years ago, when it really did look as though meaningful action to reduce head injuries would have to be taken.

During a 1993 game in England’s 3rd division, Torquay’s John Uzzell and Brentford’s Gary Blissett challenged for a head ball. Blissett’s arm smashed into Uzzell’s face, causing a broken cheek bone and serious damage to the eye socket. Blissett was red-carded. The English FA held a hearing, confirmed the referee’s decision, and suspended Blissett for three games.

Uzzell sought damages, and took Blissett to court, where Blissett was found not guilty. What decided the case in Blissett’s favor was undoubtedly the extraordinary evidence given by Graham Kelly, who was at that time the head of the FA. He asserted that the head clash was “an ordinary aerial challenge,” adding that if he attended four games a week during the season, he could see 200 such challenges. 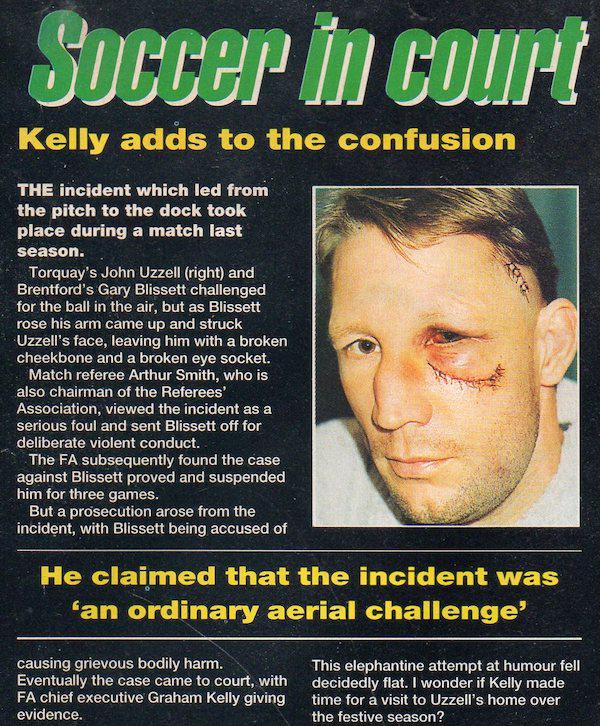 So it was legally established: violent head clashes, with flailing arms, and appalling injuries, were simply “part of the game.” Nothing needed to be changed. Soccer was off the hook.

Kelly, of course, had little choice. To condemn Blissett -- as his own FA had done -- might well have caused a guilty verdict. And, it was thought, after that la deluge -- a flood of civil court cases seeking damages for injuries. The very existence of the sport would be threatened.

Soccer survived, with this central contradiction in its activities quickly buried in the hope that everyone would soon forget about it. And that, more or less, is what happened.

But time and medical science is working against the sport. In the 2000s the reports of retired players suffering from brain damage began to pile up in soccer -- but much more so in the NFL. Soccer paid no attention. Even when the NFL, faced with exactly what had threatened soccer back in 1993 -- a mass of lawsuits -- agreed to a settlement that, it is estimated, will cost the sport at least $1 billion, soccer slept on.

And still it sleeps, using the protocol to camouflage its disgraceful refusal to clean up its sport, in which serious head injuries are “simply part of the game.” That cannot continue, if only because the protocol itself -- however well-intended -- has become a farce.

Last week there were two glaring reminders of that state of affairs. From England, there was the case of Sheffield United’s George Baldock, who suffered a head injury in the game against Leeds. Treated on the field, he was allowed to re-enter the game, only to be substituted when he later complained of double vision.

And from Mexico, during the Concacaf Olympic Qualifying final there was the nasty-looking head clash between Rigobrerto Rivas of Honduras and Mexico’s Alan Cervantes that left both players stretched out on the ground, each clutching his head. Protocol? Forget it. In less than two minutes the game restarted, with both players back in the action (each still rubbing his head).

Just what does have to happen to jar soccer into facing up to its responsibility to ensure the safety of its players? Maybe the latest medical research will do the trick -- something being described as a potential “game-changer.”

Are FIFA and IFAB aware of this? Probably not, they seem totally impervious to anything likely to disturb their masterly inactivity. I suggest they should take a look at a recent issue of the journal “Neurology.”

Some early work had been done, starting in the 1920s, on boxers who appeared to suffer memory and speech confusion problems late in life. Caused, it was suggested, by the boxer’s career having involved countless blows to his head. The disorder was dubbed dementia pugilistica, or more commonly, punch-drunk syndrome.

But the etiology of the disorder (i.e. its beginnings, how it starts) remained a mystery. The disorder is now called CTE, and its origins are still unknown. But maybe for not much longer. Researchers are closing in on finding what they term a biomarker -- some clear indication in the living brain that CTE is beginning to happen. It might be minute, but detectable, physical changes in the brain, or it might be chemical -- the appearance of certain antibodies, for instance.

So the net is closing but not quite there yet. This is Dr. Robert Stern, a member of the research team: “Although I wish I could say it’s a game-changer right now, it’s a game-changer for the future.” He and the team appear confident that a biomarker -- so elusive thus far -- will be identified soon.

The discovery of a biomarker would be good news for sufferers (possibly it would spur the development of a treatment) -- and for potential sufferers. But it would be possibly catastrophic news for the NFL ... and for soccer, should it be listening.

Imagine that the brains of young high school players could be regularly tested for signs of incipient CTE. Maybe the brains of very young boys would reveal some as likely future victims. The scene widens: no parents would allow their youngster to play football (or soccer?) without being tested. The NFL (and soccer?) would conduct its own compulsory tests, demanding that the parents of all players sign a indemnity, accepting responsibility should CTE begin.

That really does open up the possibility of the demise of football (and soccer?), or at least some massive changes in game rules. Of course the same reasoning must apply to soccer. There will have to be rule changes to rid the sport of actions that invite violent head contact.

For the sport to continue to behave as though soccer concussions are a unique phenomenon, to which the huge amount of research that has now been done on CTE simply does not apply. An absurd position, which will surely have scary legal complications.