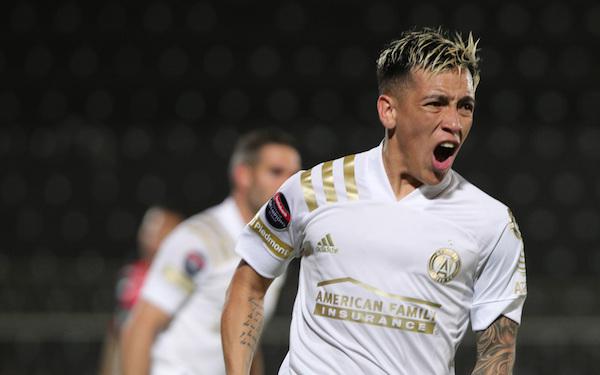 Atlanta United survived a red card to veteran keeper Brad Guzan to beat Costa Rican powerhouse Alajuelense, 1-0, in the first leg of their round-of-16 series in the Concacaf Champions League.

The game marked the debut of new head coach Gabriel Heinze, who had to bring on Los Angeles-born Argentine youth international Rocco Rios Novo in the 43rd minute when Guzan was shown a red card for taking down Marcel Hernandez in a one-on-one situation just outside of the penalty area.

Rios Novo, 18, was signed by Atlanta United 2 from Argentina's Lanus in March and added to the first-team roster on Monday with a four-day contract. He made six saves in the second half to preserve the win.

The Five Stripes went ahead on Ezequiel Barco's penalty kick in the 50th minute. The penalty was awarded when 19-year-old left back George Bello fired a low cross that was ruled to have hit Jose Salvatierra's arm.

Heinze, the 42-year-old coach who was hired from Velez Sarsfield, said he wasn't surprised with the win.

"I was very hopeful that my players would fight for this club, but not surprised," he said.

Guzan was the only starter from Atlanta United's 2018 MLS championship team to start on Tuesday. Josef Martinez entered the game in the 67th minute, making his return to the field after a knee injury suffered in February 2020, an absence of 14 months.