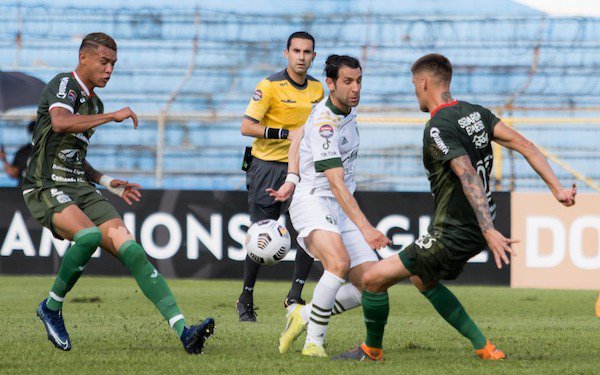 The Portland Timbers settled for a 2-2 tie with Honduran club Marathon after twice taking the lead in San Pedro Sula in the first leg of their round-of-16 series in the Concacaf Champions League.

The result put the Timbers in good position to advance to the CCL quarterfinals for the first time. The play the second leg next Tuesday at Providence Park, where they are undefeated with four wins and one tie in five Concacaf matches.

Felipe Mora put the Timbers ahead in the 35th minute when he scored off a cross from new Mexican defender Josecarlos Van Rankin. The second Portland goal was scored in the 59th minute when Marathon goalkeeper Denovan Torres tipped Diego Valeri’s looping free kick off the crossbar and the ball ricocheted into the goal off Torres’ head.

Marathon, which is playing in the CCL for the first time since 2010, responded with goals by Brayan Castillo four minutes after Mora's goal and Marlon Ramirez nine minutes after the own goal.

Mora was only forward the Timbers dressed. They were playing without injured forwards Jeremy Ebobisse and Jaroslaw Niezgoda.

Sebastian Blanco was lost in September with an ACL knee injury but is close to returning to action. The 2020 MLS is Back MVP traveled to Honduras but did not dress.