Like so many Americans, Clay Berling became hooked on soccer following the introduction of the pro game.

He knew nothing about soccer when the Oakland Clippers arrived in 1967 but discovered he could bring his entire family -- wife Ruth and six children -- to watch soccer for less than $10 at the Oakland Coliseum.

Berling wanted others to enjoy soccer like he had, so he got involved in Cal-North, the state association, and in 1971 started a weekly soccer magazine, Soccer West.

In 1972, Soccer West became Soccer America, which grew to 23 full-time employees in the 1990s. Clay's daughter Lynn Berling-Manuel served as editor-in-chief and publisher. Another daughter, Janet Ceja-Orozco, headed SA's fulfillment department. Their mother, Ruth Berling, was Clay's partner in the venture and worked in the production department until her death in 1991.

On Thursday, Soccer America celebrates its 50th birthday. It has three full-time employees, Paul Kennedy, Mike Woitalla and Doug Murdock, all based in the East Bay. Soccer America's publisher since 2007 is Ken Fadner, the founder and publisher of MediaPost, whose staff provides support (digital, art, fulfillment and accounting). 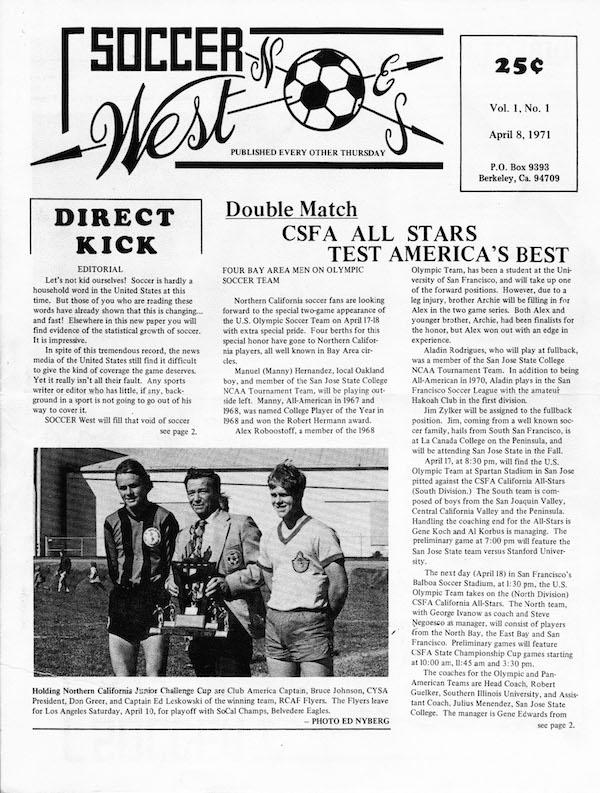 Soccer West, April 8, 1971. In the early days, Clay Berling laid out the magazine (initial cost: $4.50 for 26 issues) wherever he could find space, on the kitchen table of his home in Albany, California, on the desk of his State Farm Insurance office, and in a Sunday school room rented from the United Methodist Church in Albany.

The first issue consisted of eight pages. Most of the coverage, but not all, centered around soccer in Northern California. It included a preview of the 1971 NASL season, a report on New York's German-American League and the city's new team, the Cosmos, and a summary of the first CIF high school championship in San Diego.

Clay wrote his first Direct Kick column, starting out, "Let's not kid ourselves. Soccer is hardly a household word in the United States at this time."

Soccer America alone didn't change that, but it provided inspiration for others that they weren't alone in providing opportunities for boys and girls and men and women across the country. 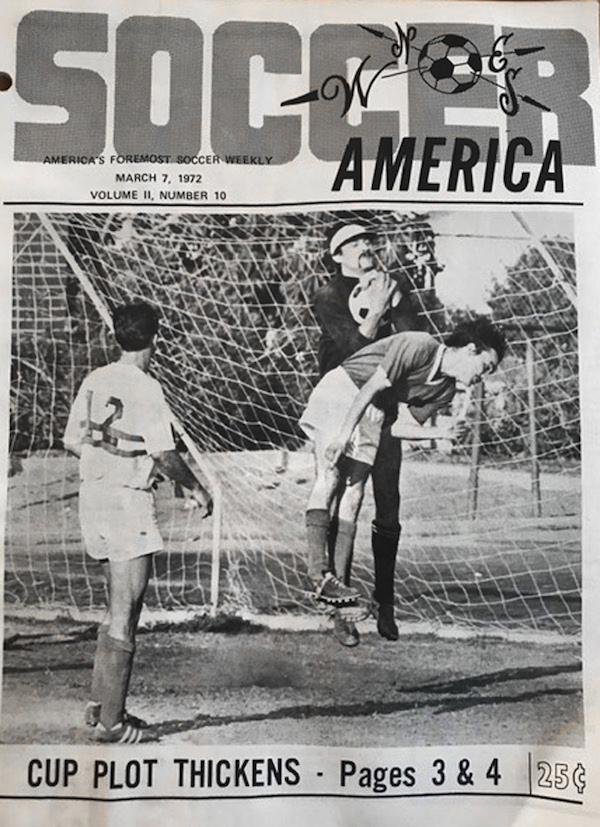 Soccer America, March 7, 1972. Berling's Direct Kick introduced a name change: "Soccer West has stuck out its hand of friendship to others and now carries the name Soccer America."

He wrote that Soccer West "certainly has a nice ring to it" but it "also carried with it the chains of regionalism. 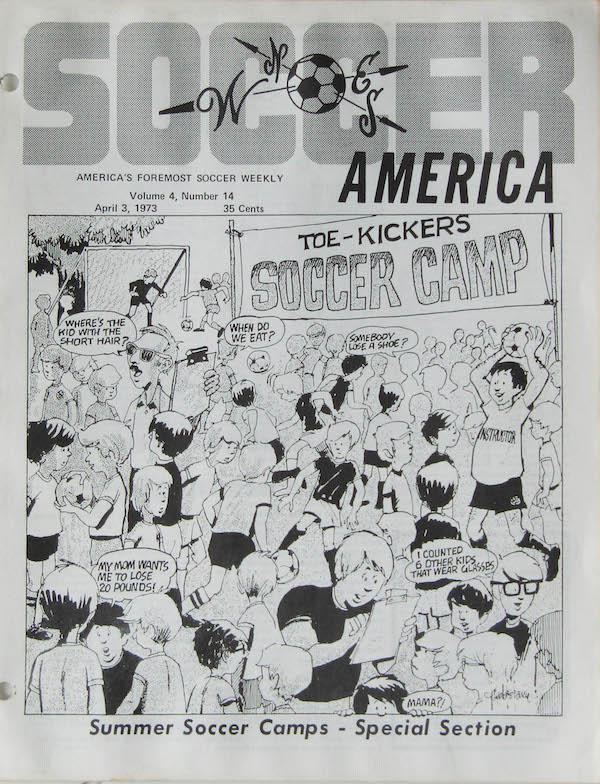 SA's camp issue helped set off the soccer camp boom, connecting aspiring campers and their parents with camp operators around the country. 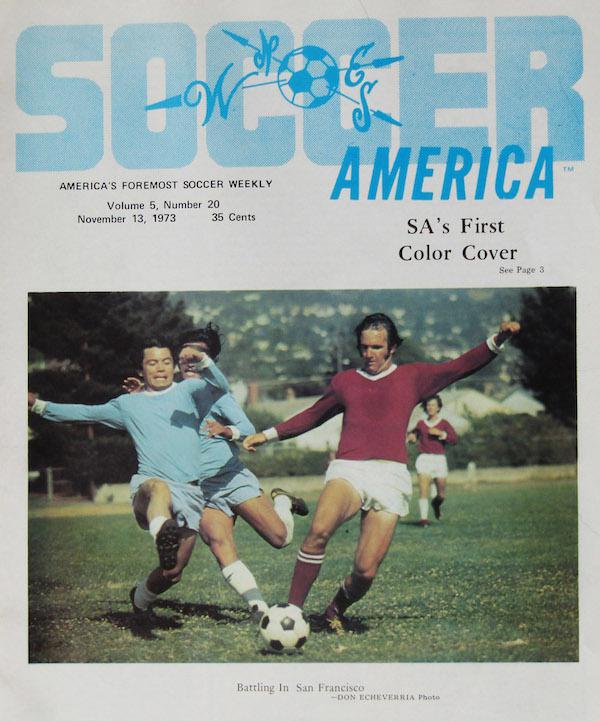 Soccer America, Nov. 13, 1973. The winner of the "first color cover award" was Don Echevarria, who started shooting soccer when the Oakland Clippers came to the East Bay. They were the same team that drew Clay Berling to soccer. 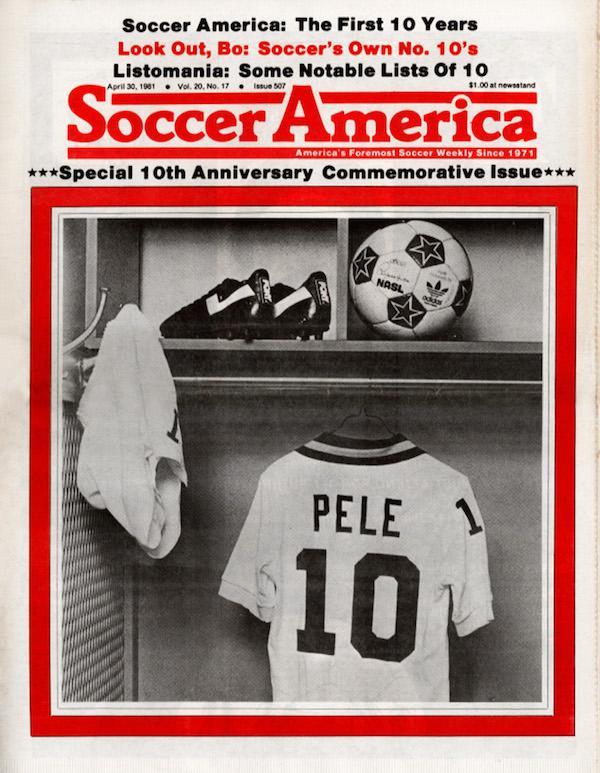 -- Lynn Berling-Manuel's "10 soccer facts and happenings that have made me sit up and take notice" (No. 1: "Team Hawaii moving to Tulsa, Oklahoma, as a step-up");
-- Tulsa Roughnecks GM Noel Lemon's "10 favorite things in life" (SA made the list);
-- Giorgio Chinaglia's 10 most memorable goals of his career;
-- Hartwick College SID Edward Clough's 10 former Hartwick players or coaches in pro soccer; and
-- SA columnist Ray Ratto (yes, he used to cover soccer) with his 10 best NASL franchises. 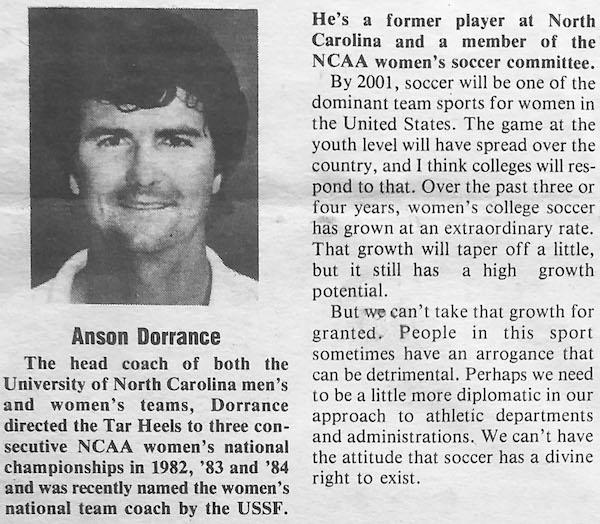 Soccer America, April 17, 1986. For its 15th anniversary, Soccer America looked 15 years ahead to 2001 and "New Soccer Horizons." The NCAA had begun sponsoring a women's soccer championship only four years earlier and the first women's national team games were only played a year before. Elizabeth House, who pioneered SA's women's coverage in the 1980s, asked coaches where would women's soccer be in 15 years. Anson Dorrance, the University of North Carolina men's and women's coach and new national team coach, predicted a big future for women's soccer. By 2001, the USA had won two women's world championships, drawing record television audiences for the second win in 1999, and the first women's pro league was launched in 2001. 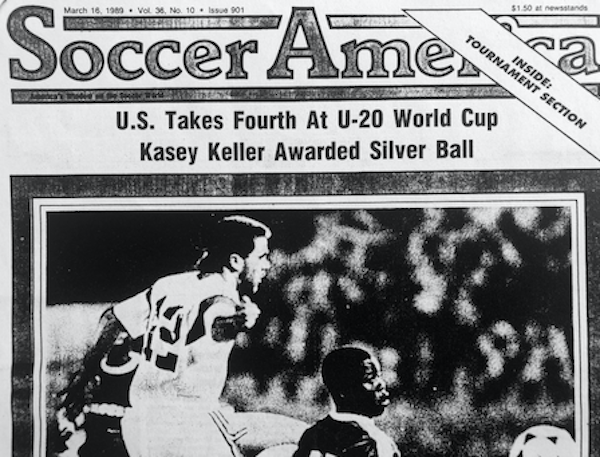 Soccer America, March 18, 1989. Soccer America sent Mike Woitalla to cover the 1989 Under-20 World Cup in Saudi Arabia, where the USA finished fourth with a team coached by Bob Gansler and players such as Kasey Keller, Steve Snow, Dario Brose and Chris Henderson.

Few events Soccer America has covered drew as much attention as its coverage of the Under-20 World Cup. It underscored Soccer America's commitment to covering the growing U.S. national youth team programs and offering coverage that was unavailable elsewhere.

Keller was the winner of the Silver Ball as the tournament's second best player, but as he told The Athletic's Paul Tenorio in 2019, "No one knew about it until it came out in Soccer America a month later." 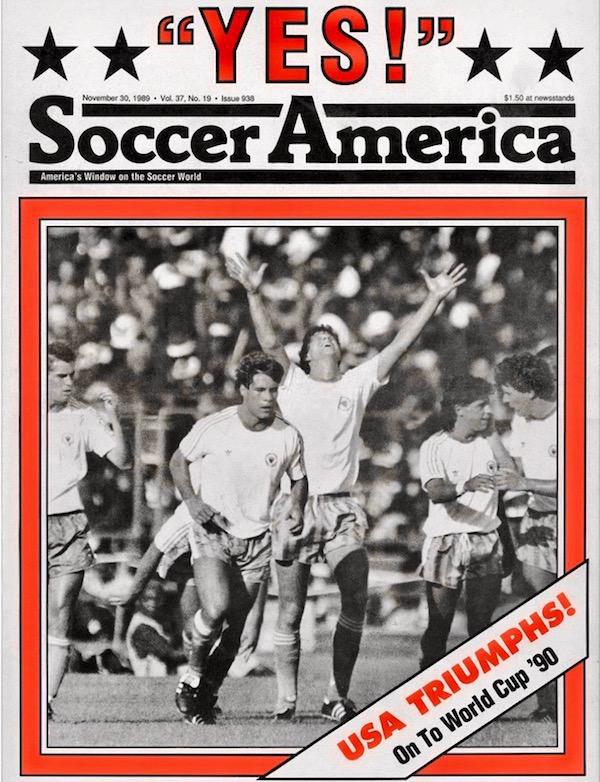 Soccer America, Nov. 30, 1989. Probably the most famous cover was the "Yes!" issue with the photo, taken by longtime Soccer America photographer and friend Jon Van Woerden, of Bruce Murray with his arms extended to the sky after Paul Caligiuri (to his left) scored the goal that sent the USA to the 1990 World Cup, ending a 40-year drought.

On page 3, Soccer Master, the St. Louis-based soccer store, featured an ad: "40 years in the making" with an offer for a T-shirt with the SA cover (just $15 plus shipping and handling). 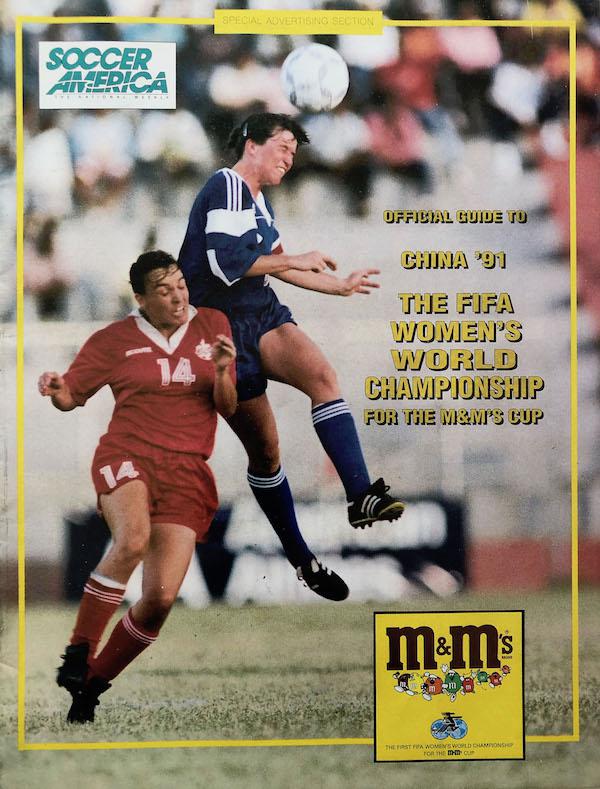 On the cover: U.S. captain April Heinrichs, later the U.S. national team head coach and U.S. Soccer's youth women’s national team director. The photo was taken by Dallas-based photographer Phil Stephens, who had covered the national team program since its inception and traveled to Haiti to cover the Concacaf qualifying tournament, where the USA outscored its five opponents, 49-0.

Soccer America's Ridge Mahoney and USA Today's Roscoe Nance were the only U.S. reporters to cover the inaugural Women's World Cup in China in 1991 when the USA captured the first of its four world titles. 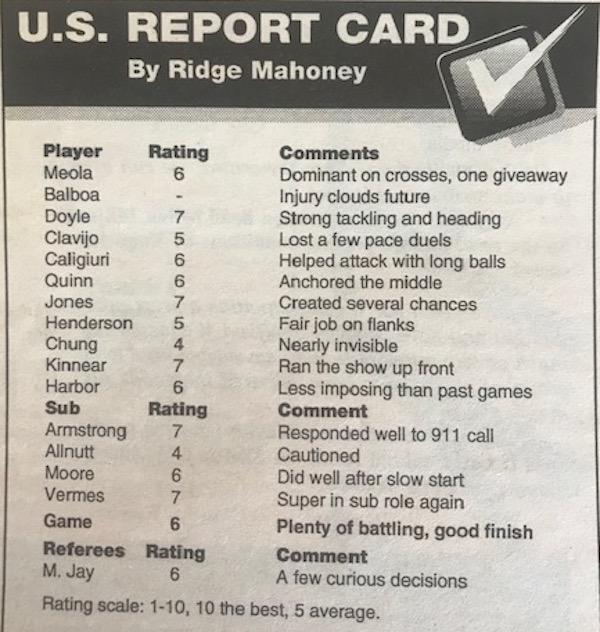 Soccer America, May 3, 1993. USA-Iceland, played in Costa Mesa, California, was just one of dozens of games the USA played in the build-up to the 1994 World Cup. It was also featured the first U.S. Report Card.

Player ratings with different grading systems have been a stable of soccer coverage for years. Soccer America introduced them in the United States, opting for a 1-10 grading system. Ridge Mahoney's grades for USA-Iceland included game-highs of "7" for John Doyle, Cobi Jones and Dominic Kinnear, a grade for the game itself and a grade for U.S. referee Majid Jay. 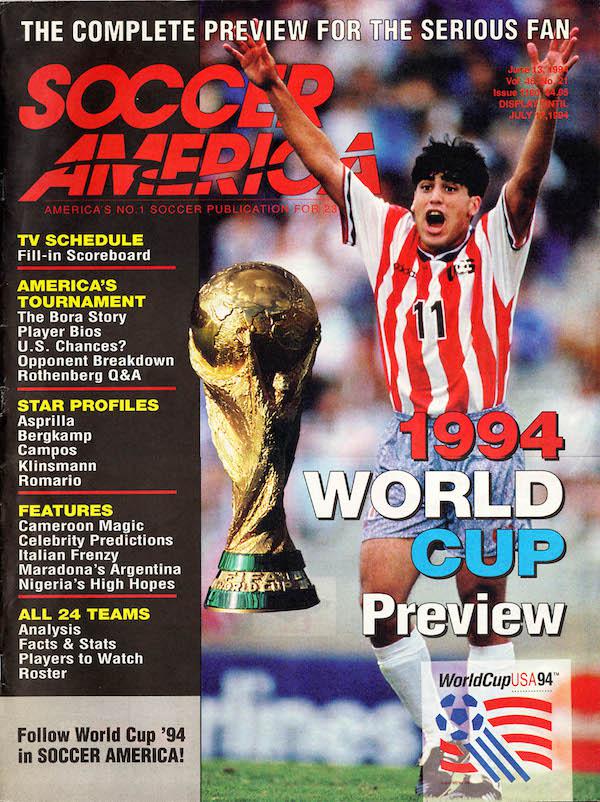 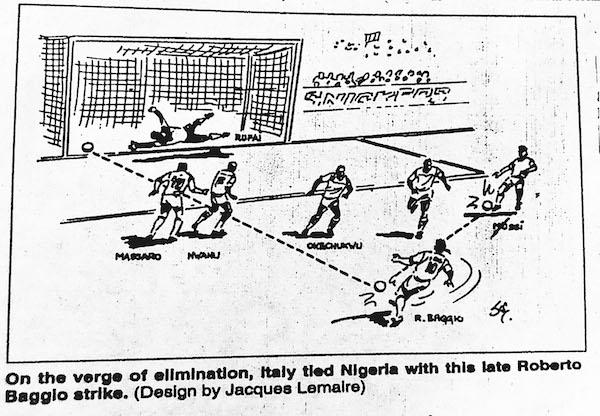 Soccer America, July 27, 1994. Under the pen name of Lem, Frenchman Jacques Lemaire was one of the world's most famous soccer artists. For Soccer America, he designed goal recreations during the 1994 World Cup, including this goal by Roberto Baggio that sparked Italy's comeback against Nigeria. 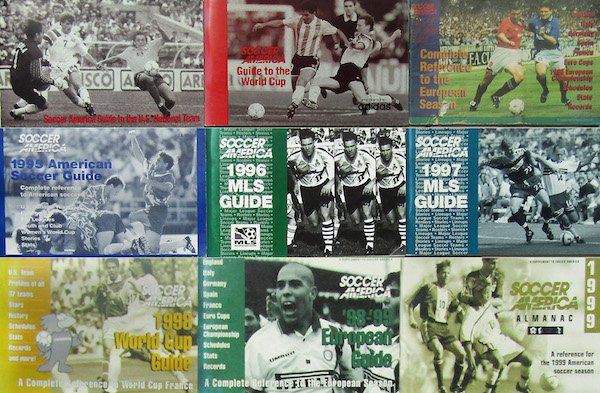 Soccer America guides, 1994-99. Readers love gifts, and as an incentive for new readers, Soccer America published soccer guides. The 72-page guides served as primers for Soccer America coverage areas, including the 1994 and 1998 World Cups, MLS, which launched in 1996, and the European leagues. The American almanacs provided annual records of the growing U.S. game at all levels, including summaries of every NCAA Division I tournament game and goal scorers from every Open Cup game. 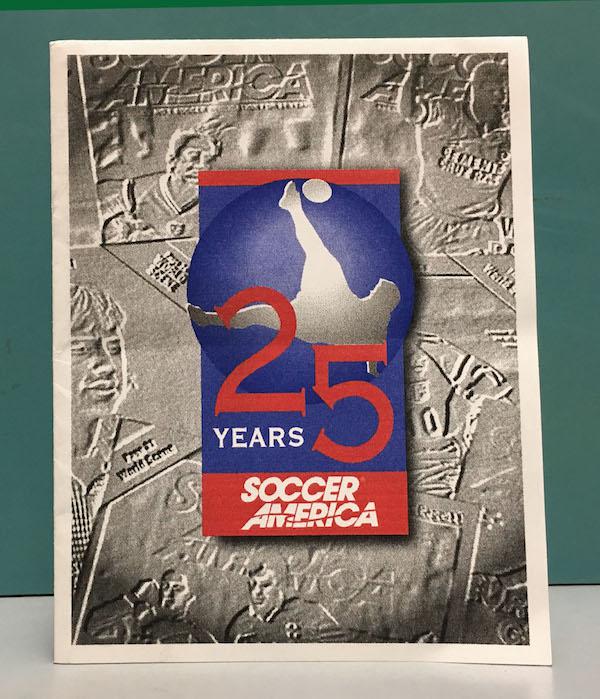 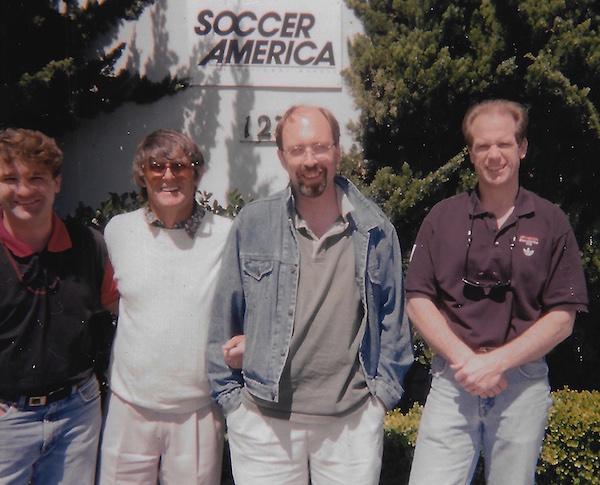 1996. After he stepped down as U.S. national team coach, Bora Milutinovic always kept in touch with Soccer America's staff. Whenever he was in the Bay Area for a national team game with Mexico or China, he'd call and either we'd meet him at his team hotel in Oakland or he'd come to our offices in Berkeley (here with, left to right, Duncan Irving, Paul Kennedy and Ridge Mahoney, in a photo taken by Mike Woitalla) and we'd go to lunch, drawing double-takes from our neighborhood's Mexican-American workers as we'd walk by with Bora. 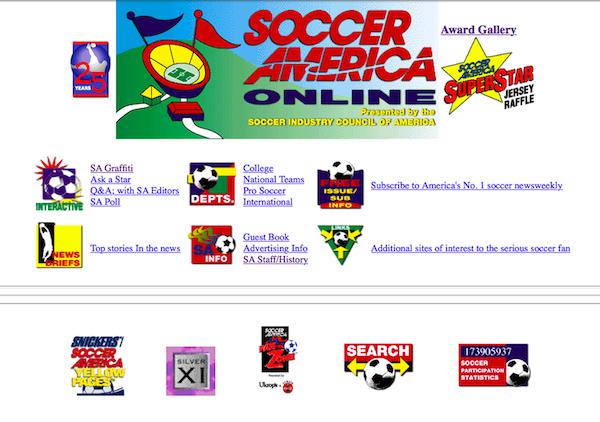 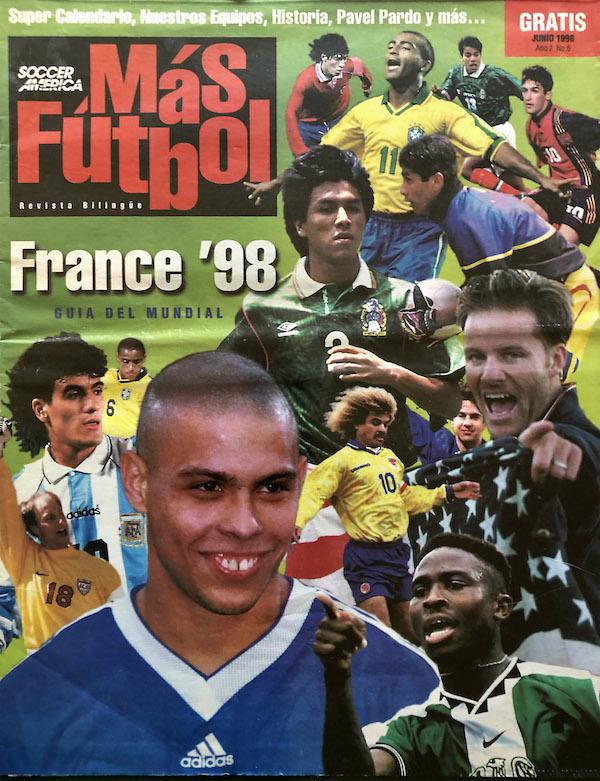 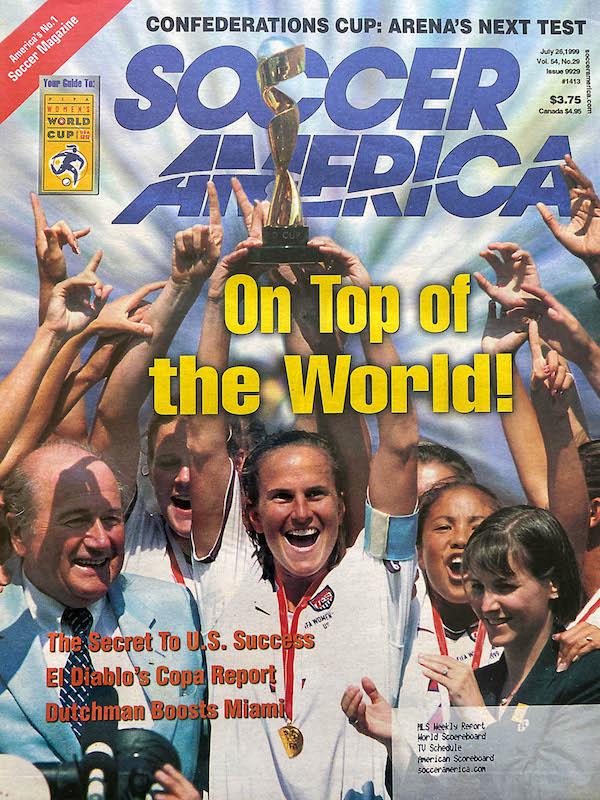 Soccer America. July 24, 1999. The USA was on the SA cover after it won the 1999 Women's World Cup. What was groundbreaking was that the U.S. women were also on the cover of Sports Illustrated, Time, Newsweek and People, the first time the same subject was on the covers of all four magazines the same week. 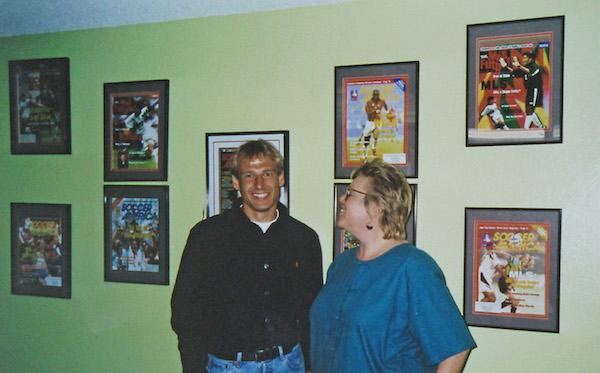 2000. The only national team coach who spent a full day at the Soccer America offices was Jurgen Klinsmann. After his retirement as a player and before he became Germany's and then the USA's national team coach, Klinsmann met with Lynn Berling-Manuel to learn about digital publishing, which was still in its infancy. 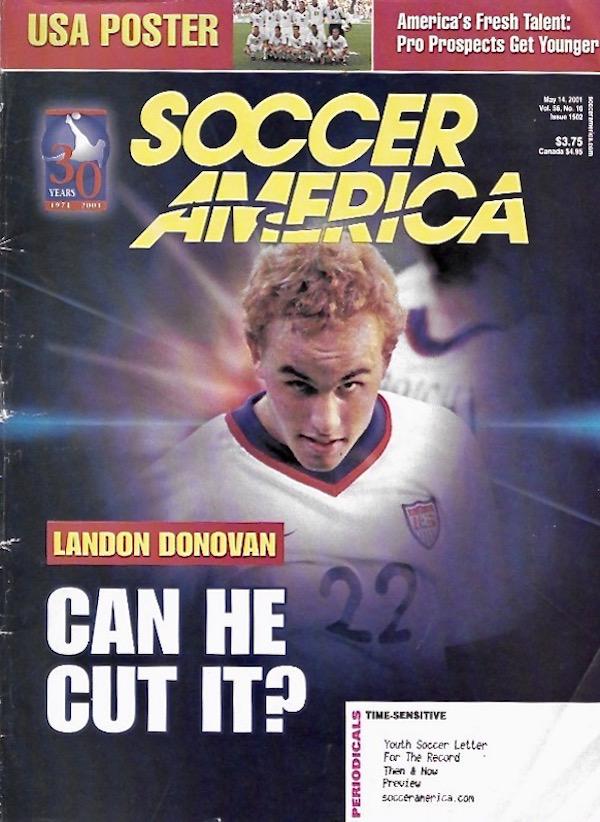 Soccer America, May 1, 2001. Soccer America debuted as an all-color, glossy magazine. The cover subject: Landon Donovan, who was playing his first season in MLS. He certainly answered the question. 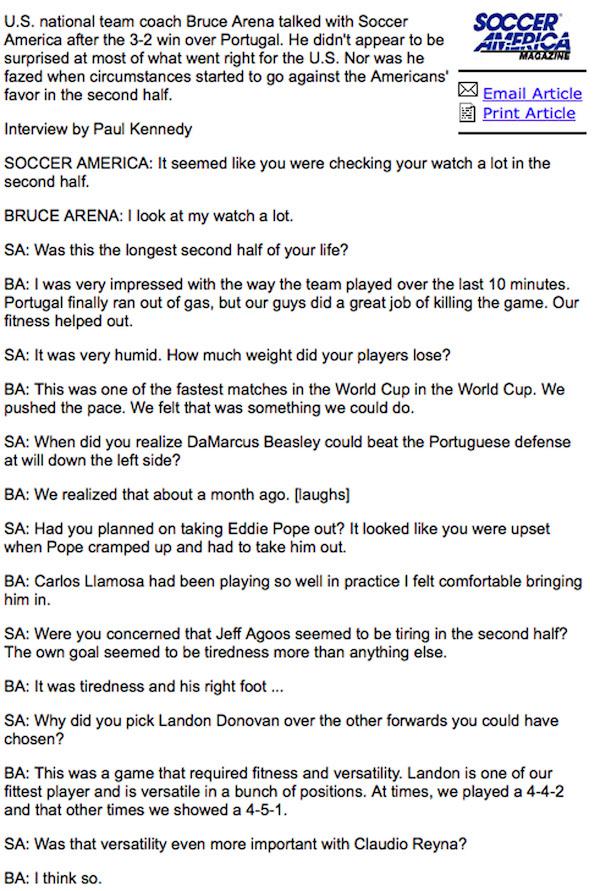 SoccerAmerica.com, June 5, 2002. The first World Cup Soccer America covered in real time was the 2002 World Cup in South Korea and Japan. It happened to coincide with the USA's best run in the modern era. It began with a 3-2 win over Portugal, fulfilling what Soccer America columnist Paul Gardner liked about soccer: "constant surprises, unpredictability, and a fascinating contrariness." After the game, SoccerAmerica.com published this interview U.S. coach Bruce Arena gave Paul Kennedy. 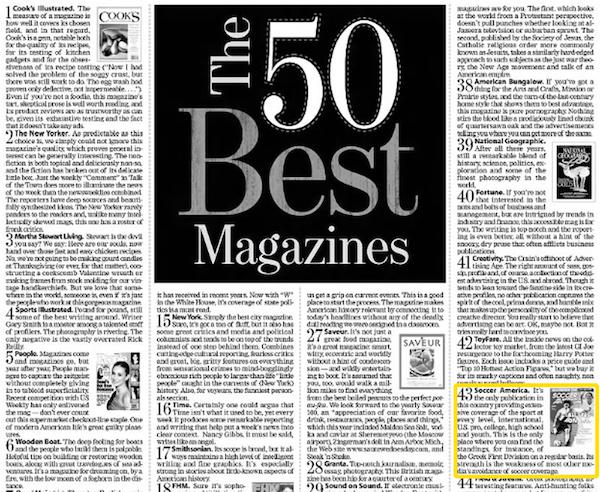 The Tribune on Soccer America: "It's the only publication in this country providing coverage of the sport at every level, international, U.S. pro, college, high school and youth. This is the only place you can find the standings, for instance, of the Greek First Division on a regular basis. Its strength is the weakness of most other media's avoidance of soccer coverage."

On the same list, at No. 25, was Family Fun, edited by Alix Kennedy, SA editor Paul Kennedy's younger sister. 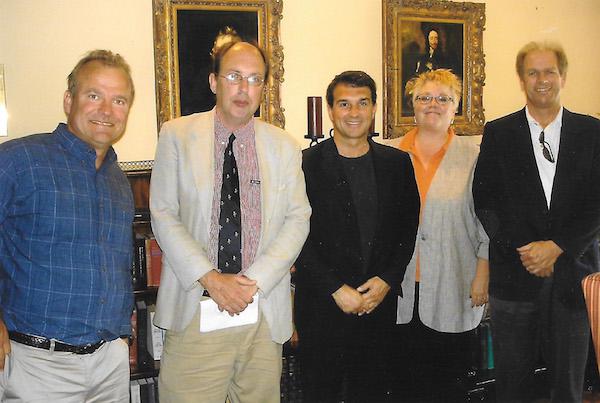 2007. It isn't every day that Barcelona calls and says its president wants to meet your editorial staff. Joan Laporta (recently elected as president for a second time) came to Stanford to speak at a lecture series. Beforehand, he met with the Soccer America staff (left to right, Mike Woitalla, Paul Kennedy, Laporta, Lynn Berling-Manuel and Ridge Mahoney) at his hotel to discuss American soccer. 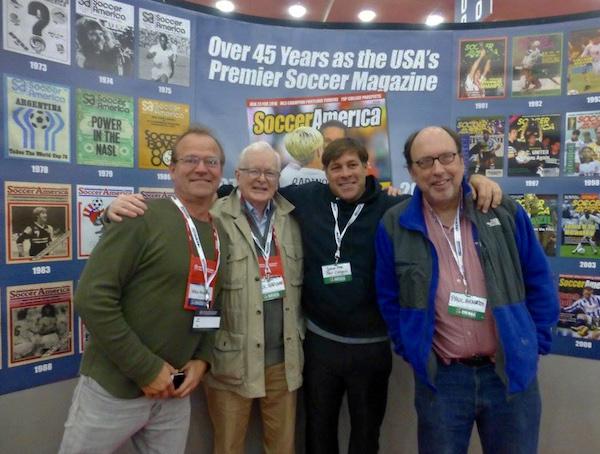 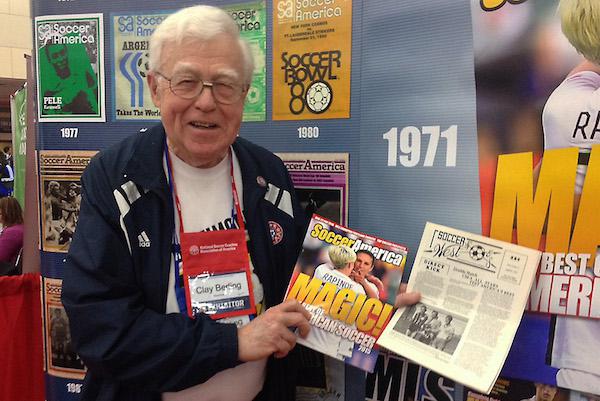 2017. No one was prouder, and deservedly so, of Soccer America than Clay Berling. Into his 80s, he greeted visitors at the Soccer America booth at the United Soccer Coaches Convention. In 1995, Berling was inducted into the National Soccer Hall of Fame as a builder. Paul Gardner and Paul Kennedy received the Hall of Fame's Colin Jose Media Award in 2010 and 2016. 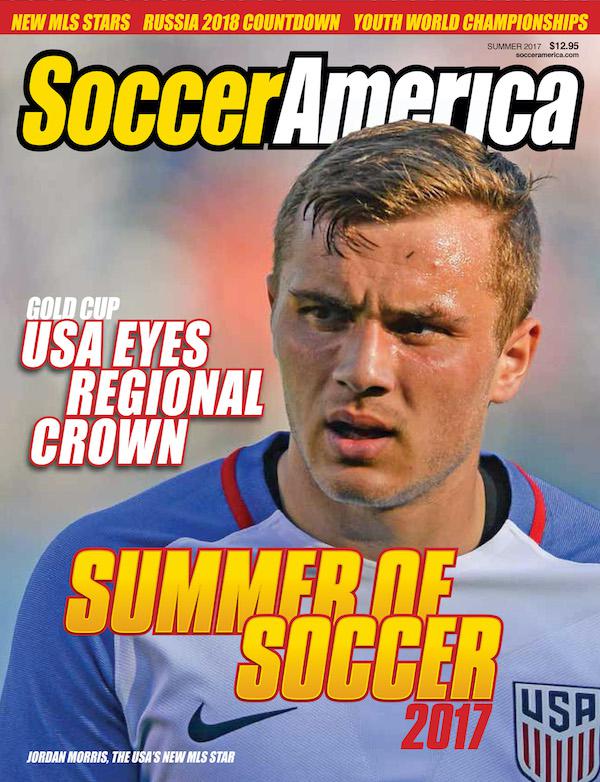 Soccer America, Summer 2017. The final print magazine Soccer America published featured a preview of the 2017 Gold Cup. On the cover was Jordan Morris, who scored the winning goal for the USA in the final.