Now landing in your inbox and not mailbox, Soccer America's strengths remain true

The first time I spoke to Mike Woitalla  he was a little standoffish. Understandably so. It was back near the start of the century, and I'd called him out of the blue to ask him what he thought of two new soccer magazines that had just hit the U.S. market. Did Soccer America  feel threatened by the competition? 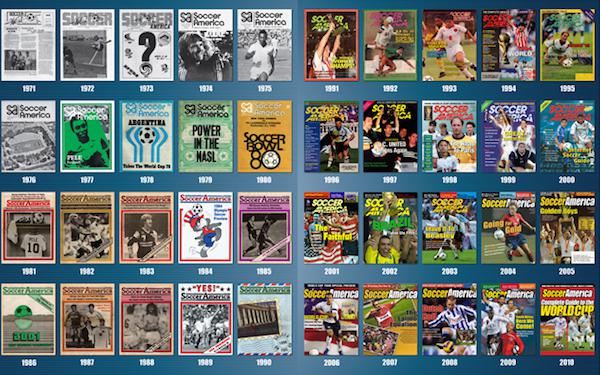 I was writing a piece for a long since defunct soccer website, but I was also using the column to make contact with all three editors. Clearly, I wasn't just comparing the publications for the benefit of my readership. I was touting for work too. Like many U.S. soccer writers at that time, I was pretty much working for free -- trying to promote the game in North America, and at the same time a willing participant in my own exploitation.

Once we'd established that we were both contributors to the UK magazine When Saturday Comes, Mike began to warm up. “We’ve been around 34 years," he said. "It’s nothing new, and there have been at least 20 magazines that have come and gone. But we welcome it.” Speaking of new rival Striker, he pointed out that “the game’s becoming more popular. It also gives us the inspiration to improve and examine ourselves. The market for soccer magazines is bigger than people realize.”

The question was, though, “how the market will react.” In the past, he said, now extinct magazines had tried to capture the youth soccer player market, but in his experience, “many young soccer players would rather be treated like adults."

Striker, which was produced in New York by the same company that published the basketball magazine Slam, lasted no more than a handful of issues, possibly just two. On Linkedin, its former editor (who took umbrage at me pointing out in my review that a "Charlie Osgood" mentioned in Striker had never existed, let alone played for Chelsea -- so, there was no work for me ... ) doesn't even list the magazine on his resume. The second magazine, 90 Minutes, hung around for about a year, maybe two.

And Soccer America? As Mike forecast, it's still here, celebrating its 50th birthday, even if it now lands in your inbox and not your mailbox. The strengths listed in my roundup 16 years ago remain as true now as they were then. "Expert, established writers" -- Mike and Paul Kennedy have been running the ship since the 1980s, thoroughly vetting every word you send them.

A "feisty letters page," which has now been transferred to the comments section that reflects the political and philosophical variety of both its readership and the country at large. "Breadth of coverage" -- no other U.S. sports portal covers soccer so widely and in such depth. Finally, I mentioned the "always interesting" columnist Paul Gardner. When I met him for the first time two years later at the NCAA convention in Baltimore, along with the rest of the SA crew, he did not object to me also having described him as an "old curmudgeon." Like all the staff, he was genial, funny, easy-going, and loved to talk about the game with the same entertaining clarity and honesty that hits you in his prose. He fit right in with the whole Soccer America ethos. And he's still always interesting.

A couple of years after I'd left the U.S., I met up with Mike again while on vacation on the West Coast. Would I be interested in writing a regular column, he wanted to know. What about? I asked. Whatever you feel like, he replied. I was skeptical that I would really be granted such freedom, but he has been true to his word, and to the democratic principles of a stalwart publication that has served the U.S. game magnificently now for half a century.

(Ian Plenderleith is author of The Quiet Fan, Rock n Roll Soccer: The Short Life and Fast Times of the North American Soccer League, For Whom the Ball Rolls, and The Chairman's Daughter. Publications he's written for include The Wall Street Journal, The Guardian and When Saturday Comes.)