Sweden, the world's No. 5 ranked team, proved a good test for No. 1 USA as it preps for the Olympics. The Americans outshot Sweden 20-9 and finally equalized late in the game from the penalty spot to match the Swedes' first-half goal from a corner kick. 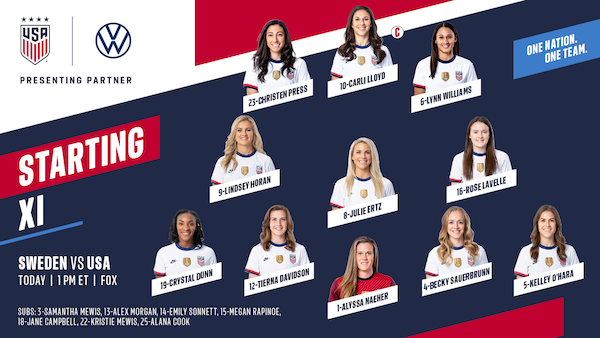 It was well-delivered corner kick and sharply struck header that gave Sweden a 1-0 lead, but when Alyssa Naeher moved off her line she ended up two yards away from Lina Hurtig. Naeher made a leg save on Fridolina Rolfö's close-range, breakaway effort in first-half stoppage time. Mis-timing her attempt to stop Sofia Jakobsson dribbling toward the goal in the 54th minute went unpunished.

Central backs  Becky Sauerbrunn and Tierna Davidson staved off a Swedish attack that came out strong and managed to score only on a set piece. Both passed well out of the back. Kelley O’Hara was the more dangerous of the outside backs moving forward and was fouled for the penalty kick. Crystal Dunn defended well but was less sharp on the ball.

Julie Ertz disrupted Swedish attacks in the midfield, deep in U.S. territory, and created chances at the other end. Rose Lavelle sparked some the USA's most promising attacks and came close on three shots, one well-saved and two just wide. Lindsey Horan set up a Carli Lloyd chance but performed less consistently than usual. Her sloppy back pass created a big Sweden chance. Horan did help keep the pressure on Sweden late in the game as the USA fought for the equalizer.

Offside five times contributed to the frontline's ineffectiveness. Center forward Carli Lloyd hit a shot about 20 yards over the crossbar from 13 yards out in the 19th minute and in the second half headed straight to the keeper from seven yards. Neither winger presented serious problems for the Swedish defense, although Lynn Williams, thanks to some patient ball control under pressure, set up a good Lavelle shot. Christen Press didn't see much of the ball.

Megan Rapinoe threatened from the left wing within seconds of coming on in the 57th minute, produced a couple more promising forays, and struck perfectly from the spot for the equalizer. Sam Mewis shot way high in the 73rd minute. Kristie Mewis failed on two shots in stoppage time. Alex Morgan troubled the Swedish backline somewhat but fell short of presenting real danger.

TRIVIA: By earning her 300th cap, Carli Lloyd hits a mark reached by only two others: Kristine Lilly (354) and Christie Pearce Rampone (311).