The return of Atlanta brilliance? Not yet.

I had thought it would be a useful venture to watch Atlanta United’s game against Costa Rica’s Alajuelense. My aim was to see whether the Frank De Boer  blight had been eliminated, whether Atlanta, under new coach Gabriel Heinze -- a Latin American coach to coach the team’s Latin American players -- was rediscovering the Latin style that had made it such a sensation in 2017 and 2018.

Mission not accomplished, I have to report. In fact, the mission never even got off the ground. I checked the injury list for Atlanta -- just two names on that, neither of them belonging to players I had considered likely starters. Overall, this is a strong roster, a young one, but with plenty of experience. And, of great importance to me, a good deal of flair too.

It didn’t take me long to come up with a 3-4-3 that seemed to me to be pretty formidable. My only doubt was the availability of Argentine defender Franco Escobar -- I couldn’t work out whether he was on loan to Newell’s Old Boys. As I had been much impressed by Escobar back in 2017 and 2018 I decided he must be available. No doubts about the Venezuelan super-scorer, he was definitely fit again. So my team looked like this: Guzan; Escobar, Robinson, Bello; Damm, Moreno, Sosa, Barco; Erik Lopez, Martinez, Lisandro Torres.

That, it seemed to me, or something very similar, would be the team that Gabriel Heinze -- assuming he intended to win this game - would field against Alajuelense.

So much for my team selection. I got over half the team -- six players -- wrong. No Escobar, Damm, Moreno, Erik Lopez, Martinez or Torres. But there were Mulraney (who had made a totally negative impression on me back in 2019), Walkes (a journeyman English defender with third-division skills), Lisandro Lopez, Lennon, Hyndman.

The 38-year-old goalscorer Lisandro Lopez made sense as a replacement for the non-starter Martinez. I’d preferred Moreno to Hyndman, but only just; Hyndman’s skill level is excellent, but I don’t seem him as the midfield dynamo that I feel this team needs.

Heinze’s team (weakened, it seems, by COVID travel restrictions) did not impress. Attacking play was largely ineffective thanks to sloppily inaccurate, and rarely creative, passing. In defense, Walkes seemed to have infected everyone with his third-division skillset. It was not pretty, but good enough to keep the rather listless Costa Ricans at bay. Disappointing? Yes, very -- I could detect no sign of the sparkling Atlanta I had been hoping to see.

Just before halftime, things got worse. Thanks to a moment of utter recklessness from goalkeeper Brad Guzan, who raced out of his area to slide murderously into the legs of Marcelo Hernandez. A red card many times over, but referee Said Martinez complicated matters by first giving Guzan a yellow, then quickly bringing out the red. 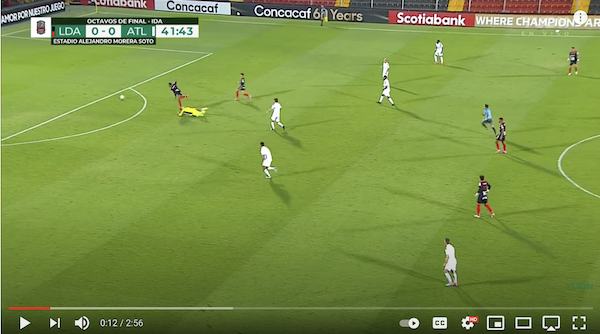 Atlanta was now down to 10 men. The guy who had to come off to make room for Guzan’s replacement in goal was, inevitably, Jake Mulraney, who had been nothing more than a hole in the air for Atlanta.

Then at the beginning of the second half came an unlikely lifeline for Atlanta. A penalty kick, a gift from the referee. Had there been a VAR, he would surely have seen, as the regular TV replay showed, that the ball had hit defender Jose Salvatierra’s face, not his arm.

The die was cast, then. Ten-man Atlanta would now play defensively to protect their one goal lead. I now had no reason to continue watching, but watch I did and, honestly, I couldn’t tell whether Atlanta had gone into defensive mode or not. The incoherence of its whole performance frankly defied my attempts to impose some sort of soccer order on it.

The standout player for Atlanta, no doubt about this, was the new recruit, Argentine mifdielder Santiago Sosa. Mainly for his work rate, and his defensive contribution. Again, I’m thinking of the team’s need for a creative midfielder. Sosa is listed -- accurately, I now see -- as a defensive midfielder.

Nonetheless, there will always be a feeling that something worthwhile has been accomplished when a 10-man team pulls off an away win. Atlanta has that to comfort it for a ragged performance.

There is also the encouraging thought that any future performance simply has to be better than this. Atlanta has the players to do much better. The return game against Alajuelense should offer the opportunity for a strongly attacking approach.

In the meantime, Atlanta might want to think seriously about Guzan’s rough-house style. In 2015, while playing for Aston Villa in England, Guzan made the front page of The Star in a photograph which showed him smashing into Leicester’s Nathan Dyer. Guzan’s vicious assault did not help his team -- Dyer had headed the ball into the goal a split second before Guzan knocked him out cold.

Closer to home, at the beginning of the 2018 MLS season, Guzan smashed into another player, who was taken off the field on a stretcher, suffering from a serious concussion. This time, Guzan had roughed up one of his own teammates -- Franco Escobar, who was sidelined for a month. Alas, for poor Escobar, the mayhem continued. A month after returning to action, Escobar was the victim of another hefty collision with Guzan. This time Escobar left the field with a thorax injury.

And Guzan is the man who is Atlanta’s captain?