On Tuesday, in its latest Olympic preparation game, the USA outshot France 16-3 and won 2-0 in a significantly improved performance from its 1-1 tie over Sweden last Saturday. After going down early, the French found no solution to a strong and smart U.S. defense. 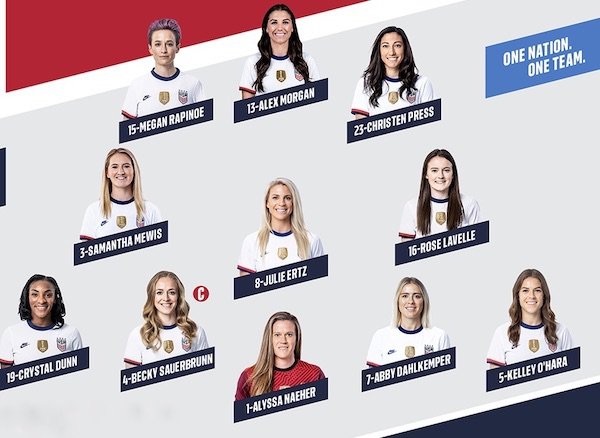 Just one save, a routine stop, was required of Alyssa Naeher. When she failed to grab a high cross near her goal line, she at least managed to bat the ball into a safe area.

Central backs Abby Dahlkemper and Becky Sauerbrunn did remarkably well at anticipating French attacks. In the middle of the first half, Sauerbrunn headed clear a corner kick and intercepted two passes on three consecutive French attacks. Left back Crystal Dunn fed Megan Rapinoe in the buildup to the penalty kick for the first goal. Dunn flew down the wing in the 35th minute and forced a good save from French keeper Pauline Peyraud-Magnin, and her defensive play included smoothly controlling the ball to prevent a corner kick and hitting a precise pass to Alex Morgan. Dunn also did well when with a ball near the goal line when a bad touch would have sent the ball into her own goal. The right back Kelley O’Hara linked well with Rapinoe and defensively she frustrated Eugénie Le Sommer.

Rose Lavelle's composure on the ball was a key to the USA controlling the midfield while Julie Ertz, who also spurred counterattacks, thwarted French attacks down the middle and won plenty of balls. Sam Mewis was part of the buildup on the second goal but was plagued by poor touches. Late in the game, she whiffed on a shot and headed straight to the keeper from close range.

Megan Rapinoe started and finished strong. She set up an Alex Morgan chance that culminated in the penalty kick Rapinoe converted -- and before being subbed in the 63rd minute kept the pressure on down the left flank, including orchestrating an attack after winning the ball in the U.S. half. Morgan, whose foot was stomped on to earn the PK, finished sharply after set up with a precise pass from Christen Press. The U.S. frontline, which included some playmaking from Press, kept enough pressure on the French to prevent their outside backs from entering the attack to any effect.

The subs helped prevent France from ever looking capable of a comeback, but Carli Lloyd's touch was off and when she mis-trapped a ball, she clattered into Eve Perisset to earn a yellow card. Sophia Smith shot wide shortly after arriving but earned a corner kick with her second attempt. Lindsey Horan covered lots of ground and added further frustration to the French attempt at cohesive play.

NOTABLE: France, No. 3 in the FIFA World Rankings, and No. 2 Germany did not qualify for next summer's Olympics. UEFA uses the previous World Cup to decide qualifiers. At the 2019 World Cup that France hosted, it fell to the USA in the quarterfinals while Germany fell at that stage to Sweden, which went on the finish third and qualified for the Olympics along with fourth-place England/Great Britain and the runner-up Netherlands.