The success of MLS reaches profoundly into American soccer

Whenever my grandparents visited from Germany, we'd go watch soccer. In 1977, my grandfather had a wonderful time at Aloha Stadium watching Team Hawaii playing the Las Vegas Quicksilvers. He marveled at seeing the great Eusebio and pointed out that No. 5, Wolfgang Suhnholz, had played for Bayern Munich.

I turned into a Bayern fan at age 6 watching the 1970 World Cup from my grandparents' living room in Hamburg and Gerd Mueller became my favorite player. I embraced the Dallas Tornado while living in Texas until 1974. Imagine my delight as a 13-year-old soccer fan when Team Hawaii gave me a pro team to support in my own town.

But Team Hawaii folded after one season. The Tornado, which I kept following with our subscription to Soccer America, called it quits in 1981. The NASL collapsed after its 1984 season. By then, I'd moved to Berkeley, and my parents back to Texas. On a trip to Dallas, with my grandmother -- she was a Hamburg SV fan like my grandfather from the Uwe Seeler era -- off we went to watch the Dallas Sidekicks of the Major Indoor Soccer League.

I warned her that this would be a different kind of soccer. Half circus, half soccer. Shortly after we passed through the Reunion Arena turnstiles, she said, "I know what you mean." We were looking at a pair of elephants.

I'd meant to prepare her for the disco lights, blaring sirens and loud music, but this particular game even featured a halftime elephant race. The crowd cheered as much for the victor as it did for the guy who picked up the pachyderm poop.

I don't disparage the indoor game. I'd watch Tatu or Steve Zungul anytime, and the MISL gave plenty of soccer players a paycheck during more than a decade of the USA not a having top-tier national professional outdoor soccer league. But the indoor era just reminded us how far the USA was behind in going mainstream with real soccer.

The period between the NASL and MLS turned out to be a significant part of American soccer’s evolution. The spotlight turned on the college game, and it responded by producing an important generation of players and coaches. The youth game kept growing. U.S. Soccer managed to prepare a team good enough to qualify for the 1990 World Cup and reach the second round as host in 1994.

MLS arrived in 1996. The opener: D.C. United at San Jose. By then, I had been with Soccer America since 1984, but I chose to watch that game not from the press box but from the stands. At my age, and as journalist, I would never again have a favorite team the way a fan does. But on that day, I wanted to feel like a fan – like when you're with your grandfather in the stadium.

Eric Wynalda hit the net in the 88th minute, and more big crowds on opening day sellouts including 70,000 at the Rose Bowl sent MLS on the way to a glorious first season that culminated with a memorable 3-2 D.C. United win over the Galaxy in the first MLS Cup. 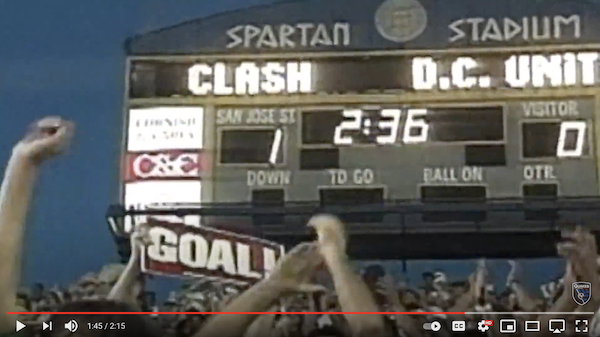 As if to heed the warning you only have one chance to make a first impression, MLS nailed it.

Sunil Gulati, MLS’s Deputy Commissioner, managed the acquisition of players for all 10 teams with $20 million ($33 million in 2021 money), which I pointed out at the time was two-thirds of what Newcastle United bought Alan Shearer for from Blackburn Rovers. The players included most of the best from the U.S. national team, plus top talent from nations with significant fan bases in the USA, including Marco Etcheverry, Jorge Campos, Carlos Valderrama, Mauricio Cienfuegos, Raul Diaz Arce, Roberto Donadoni and Hugo Sanchez.

For however popular soccer in the USA had become since the NASL’s demise, MLS had to compete for fans who had access to their favorite foreign teams on television. MLS faced the challenge of luring fans to its “product” in a country with seemingly endless entertainment options, sports or otherwise. It was not smooth sailing. MLS expanded from 10 teams to 12 after two seasons, but was back to 10 teams in 2002.

In 2007, MLS mandated that its clubs create youth programs, which led to a profound impact on tapping the potential of talent from the Latino community and on youth soccer by offering a pathway for the nation’s most talented players regardless of household income. MLS clubs by no means solved all American youth soccer problems, but it did provide an unprecedented number of elite youth players a cost-free pathway. Its clubs scoured for talent in ways that non-profit clubs didn't have the means for.

(Of course, MLS success in the youth development owes immensely to the amateur youth clubs from which most players come from and that set the stage, and to U.S. Soccer for providing the platform.)

Besides the direct impact on young American players, such as Weston McKennie who didn’t play in MLS but spent seven years at FC Dallas, MLS injected a crucial ingredient into boosting American soccer culture – pro teams that didn’t betray their fans.

Only three MLS teams have folded – the Tampa Bay Mutiny, Miami Fusion and Chivas USA. The old NASL had constant turnover and left a graveyard of nearly 70 soccer club corpses.

MLS has defied a history of American pro soccer in which club owners courted fans -- like a 13-year-old me with Team Hawaii -- and abandoned them at the first drop of red ink.