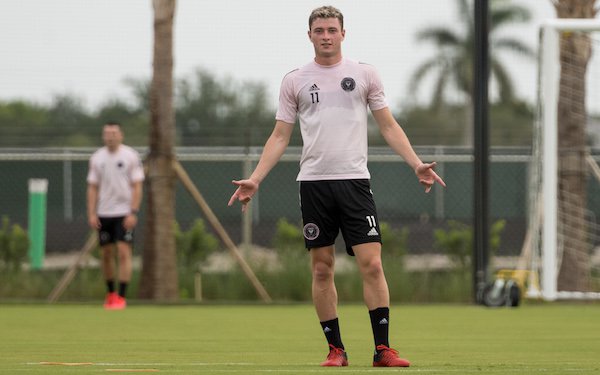 Inter Miami got down to three Designated Players on Friday by buying out Argentine Matias Pellegrini's contract.

Inter Miami went into 2021 with four players on DP contracts: Blaise Matuidi, Gonzalo Higuain, Rodolfo Pizarro and Pellegrini. It hoped to become roster compliant by having Pellegrini reclassified as part of the new U22 Initiative but his contract didn't meet the criteria for the categorization.

All four players were on the Inter Miami roster in 2020. Pellegrini was the first signing followed by Pizarro, Matuidi and Higuain. Inter Miami did not classify Matuidi as a DP, for which it now faces sanctions.

An MLS investigation determined that he entered above the compensation limit of $1,612,500 for a TAM player in 2020 after signing from Italian champion Juventus.

Pellegrini, 21, was signed from Argentina's Estudiantes for an estimated $7 million. His rights are still owned by MLS, and he will be playing on loan to Inter Miami's second team, Fort Lauderdale CF.

“We’ve been working with Matias, his representatives and MLS to reach an agreement, and at this time we believe this is the best option for all parties,” said Chris Henderson, Inter Miami's new chief soccer office, said. “Matias is a talented young player with an exciting career ahead. He will remain with the organization as we work on finding an on-field opportunity and next steps for him.”

This is not the first time this situation has taken place. In 2019, Mexican star Giovani dos Santos had his contract bought out in order for the LA Galaxy to get down to three DPs. He later was transferred to Club America.

The Matuidi situation is different. Never has a team been found to have broken the rules and played with more than three DPs. Just how hard MLS comes down on Inter Miami for breaking one of its most important rules of roster construction remains to be seen.