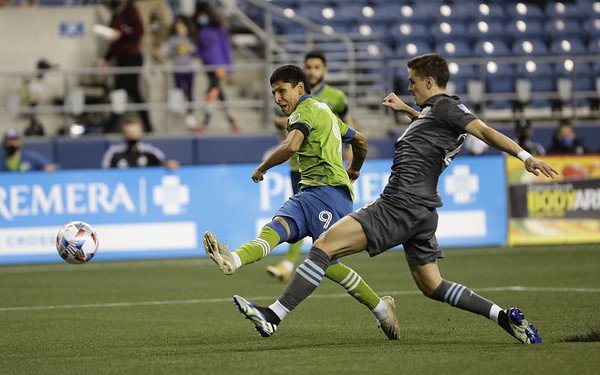 There were a lot of questions about the MLS Cup 2020 runner-up Seattle Sounders heading into their 2021 opener.

How will they fare in their new 3-5-2 formation implemented following the loss of Jordan Morris with a knee injury? How will they do without injured playmaker Nicolas Lodeiro?

The Sounders didn't miss a beat, hammering Minnesota United, 4-0, on Friday night in a repeat of the 2020 Western Conference final.

All four goals came in the second half, beginning with a stunning side-winder by Brazilian Joao Paulo from outside the penalty area.

Will Bruin fed fellow forward Raul Ruidiaz for the first of the Peruvian's two goals, and sub Fredy Montero, in his first game back with the team at which he started his MLS career, scored with a one-time shot from a cross by right wing back Alex Roldan, surpassing Clint Dempsey as the Sounders' all-time leader in MLS regular-season games.

Minnesota United had a chance to equalize after Joao Paulo's goal, but Cristian Roldan came flying in and cleared Brent Kallman’s header off the goal line.

Loons keeper Dayne St. Clair’s denied Ruidiaz a goal in the first half when he stopped his penalty kick.

Youth movement: In Lodeiro's place, 19-year-old Josh Atencio, who played all of 11 minutes in five appearances off the bench in 2020, made his first MLS start.