Who is this 'global fan'?

One of several obvious takeaways from last week's surreal rollout and hilariously prompt retreat of the putative European Super League was that soccer executives have no idea what fans want. Not only that, they have no idea who fans even are. And so Arsenal's director Josh Kroenke, son of the club's owner Stan, purports to speak on behalf of a 'global fan,' which is in itself a brand-forger's fantasy.

This global fan is a modern but mythical construct. In the minds of the marketing executives working to justify their genius (and their fees), he or she is standing in a bar or sitting on a sofa somewhere in Asia or North America, wearing the full official replica kit and ready to subscribe to any game in any league played by, say, Arsenal FC.

The marketing executive thinks the great thing about global fans is the almost unlimited potential of their numbers -- up to 7 billion soccer-loving dupes and their wallets. These fans are so dumbly devoted that they'll buy anything with the club's name on it. Scarves, caps, third away shirts, bed sheets, toilet paper, even a super league with no relegation and games against Barcelona "as often as possible." Heck, just give them the chance and the global fan will sit and watch Arsenal vs. Barcelona all day, every day.

If these global fans exist, I have never met one. While living in the USA I met hundreds of soccer fans, and most of them were as interested in the English Premier League as they were in the U.S. national team or Major League Soccer. Many of the things they loved about English soccer were things they felt were missing from American sport. They loved the same things that English fans love about English soccer. The history and the variety, the rivalries and the personalities, the stadiums and the colors, the swearing and the tears and the cheers. Promotion and relegation. Not once did I hear someone say anything like, "You know, I think I'd be a more devoted follower of Arsenal if they would just play Barcelona more often." 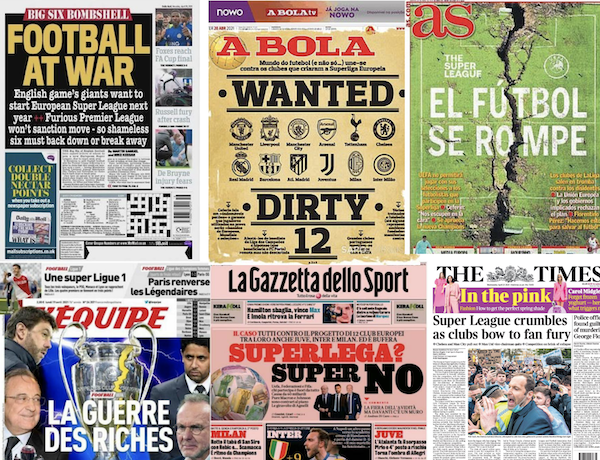 It should barely need repeating, but the whole attraction of a game like Arsenal vs. Barcelona is that it doesn't happen all that often. Kroenke is as clueless and out of touch as the other super league club owners and directors proved themselves to be, with the notable exception of Bayern Munich and Borussia Dortmund. These two teams were not moral crusaders for soccer tradition, they were merely smart enough to wait and see what the reaction to the super league would be. They already knew that German fans -- with their tendency to protest about staggered kickoff times, over-priced tickets, all-seater stadiums and soccer's unchecked commercialization -- wouldn't stand for this ill-conceived malarkey.

Around the stadiums and on the street following the super league announcement, it was the outraged local fan that quickly made the difference. These supporters belong to that inconvenient demographic labeled by club owners like the Kroenkes as 'legacy fans.' You can imagine how they would love to confine this legacy to a section of the Superclub Museum, with pictures and piped-in crowd chants. "The legacy fan was a common feature at Arsenal FC up until 2021, when modern trends sadly rendered them obsolete. With their disrespectful chants and anti-social habits (such as wearing last season's replica jersey), they were no longer open-minded and flexible enough to watch 60-minute games played in Shanghai, and moaned on and on about how they missed playing the unglobal likes of Burnley and Southampton (visit our 'Legacy Teams' section three floors down in the basement box-room)."

The local fans have shown that they're not ready to give up that easily. With mass dissent comes a shift in power and a change to the discussion, and that discussion must now be about how to change the sport for the better, not how to wreck it for good. Just because you have a ton of cash and are protected by security doesn't mean you get to say what happens to our game. Arsenal playing Barcelona in a meaningless breakaway money league is not an inevitable part of club soccer's evolution. No matter where they live or how they watch soccer, that's something almost all fans agree upon and understand.

england, italy, spain
6 comments about "Who is this 'global fan'?".
Read more comments >
Next story loading