Christian Pulisic delivers in biggest game of his club career 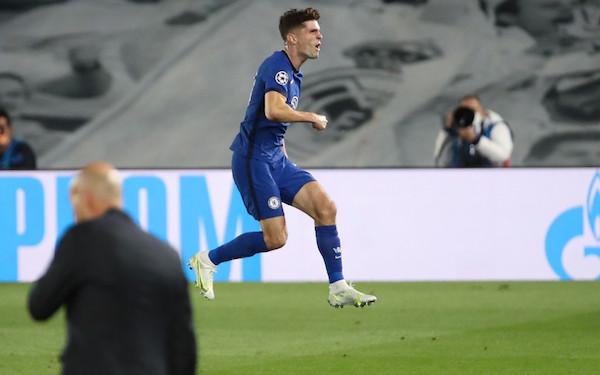 In the biggest club match of his club career, Christian Pulisic came through with a goal that earned Chelsea a 1-1 tie at Real Madrid in the first leg of their UEFA Champions League semifinal series.

Chelsea was by far the better team in the first half, and Pulisic one its main instigators, so he was a little unhappy with the result even though the Blues enter the second leg with the edge thanks to their away goal.

"[The goal] is a proud moment," Pulisic said in his post-game interview with CBS Sports, "but the job’s nowhere near done. We were disappointed obviously. We need to be a bit more clinical in front of goal and we could’ve put the game away a bit earlier."

Pulisic's goal was his fifth in five seasons in the Champions League, breaking the American record for goals he shared with DaMarcus Beasley.

It took a while for Pulisic to fit into Chelsea manager Thomas Tuchel's system, but he was perfectly placed, tucked in on the right of the attack, to torment the Real Madrid defense with the ball at his feet, especially in the first half.

It was a play, though, where he ran in behind the Real Madrid defense, connecting on defender Antonio Rudiger's long pass, that led to the early Chelsea goal.

Pulisic timed his run perfectly to stay onside, picked Rudiger's ball out of the air and broke in on Thibaut Courtois. He wasn't intimidated by the giant Real Madrid keeper and had the patience to wait to elude him before firing the ball into the goal.

“It was a great finish, great composure,” Chelsea captain Cesar Azpilicueta. “He’s an amazing player, he’s a young player, he’s growing and improving. I’m very pleased with his goal because he’s an important player for the team.”

Tuchel said the goal was well deserved but Chelsea should have been ahead in the first half if it did better with the last ball. Instead, Karim Benzema equalized in the 29th minute with his 13th goal in his last 14 matches.

"We should have scored a minimum one more goal," the German said. "The goal came more or less out of nothing but that can always happen when you are faced with individual quality from Real Madrid."