Immediately after the announcement that Julian Nagelsmann would leave RB Leipzig to become the next head coach of Bayern Munich next season, all eyes pointed to Wisconsin native Jesse Marsch  as the likely successor at Leipzig. After all, Marsch has now enjoyed success with the New York Red Bulls, RB Leipzig as an assistant, and is now set to win his second straight Austrian Bundesliga title with Red Bull Salzburg. 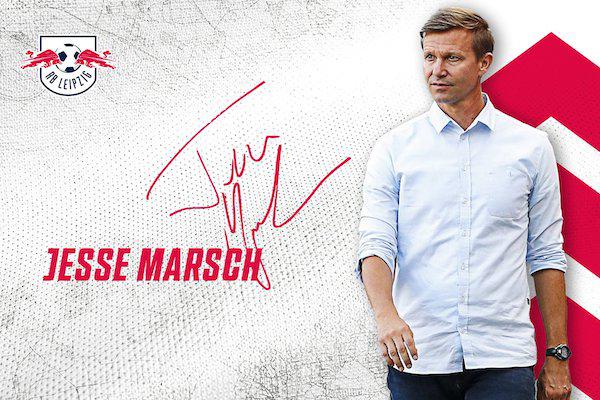 The global Red Bull organization has a set formula between all of their teams and it involves playing young players in a system that is uber-athletic, presses intensely, and attempts to generate a majority of chances in each game with their frantic style.

While there may be many good coaches on the market and likely even more on their way, Marsch simply checked too many boxes for Red Bull to look for outside managers to take over their flagship team in Leipzig.

"With Jesse Marsch we were able to appoint our dream candidate as the new head coach and quickly fill the most important position in the sporting field at RB Leipzig with a top coach," Leipzig CEO Oliver Mintzlaff said. "Jesse has done an excellent job in all of his previous positions and has developed step by step."

"It is naturally a great advantage that he has already worked for RB Leipzig for a year," he added. "Jesse knows the club, the city of Leipzig and above all our club and game philosophy. In addition to his qualities as a coach, Jesse is characterized above all by his positive and ambitious manner he can inspire people in and around the club and take them with him. We look forward to working with Jesse Marsch so that we can continue on our chosen path with him and continue to develop the club."

On Thursday it became a reality when Leipzig formally announced that Marsch, 47, would succeed Nagelsmann. In doing so, Marsch becomes the most high-profile American coach in international club soccer history. While there have been other American coaches with top European jobs, Marsch’s hire in Leipzig is on a different level.

Bob Bradley, a mentor of Marsch, was the first American to head coach in a “Big 5” league with Swansea City, but he was a midseason hire and was fired before his first transfer window. He never had a chance to put his stamp on a team. New Jersey-born Pellegrino Matarazzo has been a great story with Stuttgart as he guided the team to promotion into the Bundesliga and might help the team finish in the top 10 in his first season in the top flight. (Former Huddersfield and Schalke 04 coach David Wagner played 8 times for the U.S. national team, but he was born and raised in Germany, where he played all his club soccer and where he launched his coaching career).

Marsch will take over an RB Leipzig team set to finish this season as Bundesliga runner-up, which gives him the reins to a UEFA Champions League club in a top five league.

“The two big hurdles for me for American coaches are: A) getting your Pro license because to get your Pro license you have to be sponsored by a team,” Marsch said in 2019. “You have to go through the proper channels. And it's like a five-year process, right? So, it's not so easy.”

“And then the second is to have the connections -- have the connections to help you get the license, have the connections to know people on the inside of clubs that are going to trust you to run their club,” he added. “And you have to understand, again, that this is cultural. A club in Europe is rooted in the city and in the people that that support it. And the thought of having an American and an outsider come into to coach that team, to trust that person -- that's not the easiest thing for people in Europe to do.”

So how exactly has Marsch been able to progress up the ranks within the Red Bull organization so impressively?

Many will remember that his tenure within Red Bull got off to a difficult start. At the time, Marsch was coming off an unsuccessful stint with Montreal. When he was named the head coach of the MLS Red Bulls, he was replacing Mike Petke, who was considered to be a club legend by fans. Petke, a popular former player and as coach, guided the club to the Supporters Shield in 2013 and in 2014 led the club to the Eastern Conference final. Despite that, he was surprisingly fired and replaced by Marsch. The move was wildly unpopular and Marsch was met with great skepticism and an infamous “town hall” with supporters and season-ticket holders that got ugly.

But that rough start at Red Bull showcased a key element of what has made Marsch successful so far at every step. Wherever he has gone, he has won quickly to erase any natural doubt that surrounded him.

With the Red Bulls, Marsch won the Supporters Shield in his first season in 2015. That season helped reverse the negativity about his hire and as he guided the team to its best ever record so far in a season. When he left midway in the 2018 season to head to Germany, he left the team in great shape to win yet another Supporters’ Shield over Tata Martino’s famed Atlanta United team – a job that was completed by Marsch’s successor, Chris Armas.

“When I first was named and then when we first got started in the league, I think there was some talk about the first American to coach in the Austrian Bundesliga,” Marsch said. “But I think that it's been more about trying to get this team moving and playing the way that we want. I think the fact that I'm a somewhat insider because I've coached within Red Bull, maybe that has lessened the overall impact or talk about an American coach.”

Before he heads to Leipzig, Marsch will have the chance to collect even more silverware. Salzburg won the Austrian Cup final, 3-0, against LASK. Following that, there are four more Bundesliga games remaining and Salzburg is in first by six points.

Being able to win immediately will obviously be critical for Marsch at Leipzig as a top Bundesliga team will bring far more scrutiny than he has ever had before.

Fortunately for Marsch, he has other traits that will help him. During his time with various Red Bull teams, he has coached elite players, including  Thierry Henry, Erling Haaland, Tyler Adams and Dominik Szoboszlai. Marsch has also won repeatedly while successfully utilizing the Red Bull system and philosophies.

This week’s announcement of Marsch’s hire in Leipzig was groundbreaking for American soccer and it presents a huge opportunity for Marsch -- plus a reunion Adams.