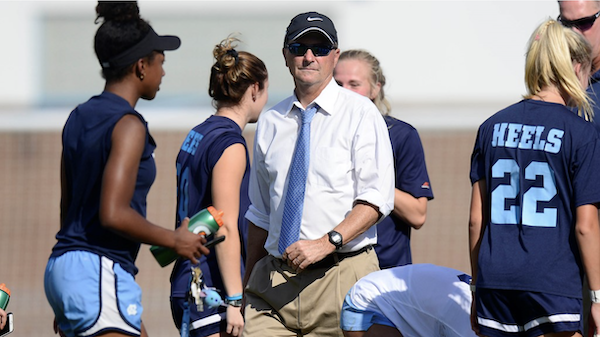 A few hours before the University of North Carolina’s NCAA tournament second-round victory over Denver, Anson Dorrance  was relaxed.

But this is not the 70-year-old coach’s first rodeo. The Tar Heels have won 21 NCAA championships – more than half of the 38 that have been contested – though never during the spring.

In his 42 years at the helm, Dorrance has learned to roll with the punches. Of this year’s pandemic-postponed national tourney, he says simply, “the weather keeps getting better. We’re used to starting in the heat and ending in the cold. This is fantastic.”

He praises the “visionary” leadership of his school, his league (one of the few to play a fall schedule), and the NCAA for finding a way to hold a spring season, and a national championship. He misses his six starters (and two reserves) from the fall, but he does not dwell on their departure.

“My imperative is to get as many players into the pro leagues as possible,” he says. “We’d have a hell of a team with that heavy artillery, but I’m proud of the success they’re having as pros.”

The Tar Heels don’t rebuild; they reload. Against Denver, Dorrance’s back four were all freshmen. So is his playmaker. His defensive midfielder is a sophomore. “We love it!” he says. 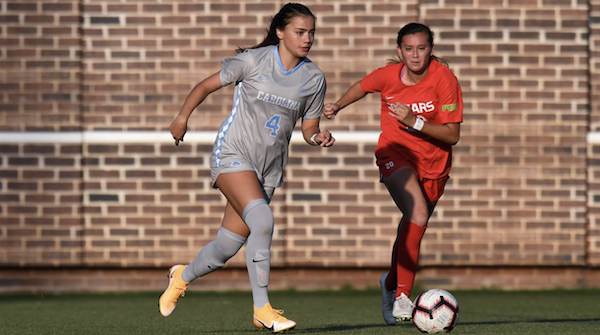 Paige Tolnetino (No. 4), one of UNC's starting freshmen in the Tar Heels' 2020-21 NCAA championship quest.

The national tournament is not the only element of college soccer that looks different this spring. Recruiting -- a key driver of any program’s success -- has been on hold since COVID struck.

“I haven’t been on the road in so long, I forget what it’s like,” Dorrance says. Not that he worries. Carolina’s ID camps have enabled him to see players all the way through the 2023 cycle. “We’re in phenomenal shape,” he says. “Next fall’s class is extraordinary.”

Not being on the road does not mean that the dean of college coaches has not been paying attention to club soccer. The creation of the Girls Academy, from the ashes of U.S. Soccer’s failed Development Academy, has been a positive step, Dorrance says. “The politics with the ECNL are not as severe as during the DA war. I like the leadership at all levels. They compete in the area of player development, not like tribes fighting over turf.”

The pay issue “would be challenging for any CEO,” Dorrance notes. Her job “is to figure out a way to do it equitably and fairly. It may not be equal pay, but Cindy is strong as hell. She’ll serve the game, and her gender. She’s not there to feather her own nest, or climb the FIFA ladder.”

Dorrance is not as sure that U.S. Soccer as a national governing body respects the role of collegiate soccer in player development, for men or women. “College creates a huge player pool. Everyone develops at different stages. Most of them need guidance. Very few professional clubs cater to the perspective of an 18-year-old entering a new stage of maturation. If a U-20 or U-23 team does well, the Federation thinks it’s because of the genius of their Development Academy. But college soccer plays a big role.”

The veteran coach is excited about the state of women’s soccer worldwide. European and American matches are aired on television. The NWSL Challenge Cup is “a roaring success.” Yet, Dorrance warns, much more work must be done to raise the women’s game – and make pay for female players not only equitable and fair, but equal.

It starts in his own back yard.

“We have to support the Carolina Courage,” he says, including his own players as well as area girls and their mothers among “we.” “We have to walk the talk. NWSL salaries are ridiculously low. But they won’t rise if stadiums are empty, and TVs are not on.”

The 1999 FIFA World Cup final drew over 90,000 fans to the Rose Bowl. Two decades later, that remains the record for any women’s sports event. Part of the draw was the U.S. team (which beat China on penalty kicks, following a scoreless draw). Part was the marketing plan, urging fathers to bring their daughters to World Cup matches. Twenty years later, Dorrance says, “we need to spend similar marketing dollars, to get similar results.”

He is doing his part. He works with rivals Duke and N.C. State to promote their in-state rivalry. He adds this challenge to athletic directors in the ACC, and across the country: “Give me the same marketing dollars as you give women’s basketball. Title IX does not mean pretending that women’s basketball is the same as men’s. It’s treating all women’s sports equal to all men’s sports.”