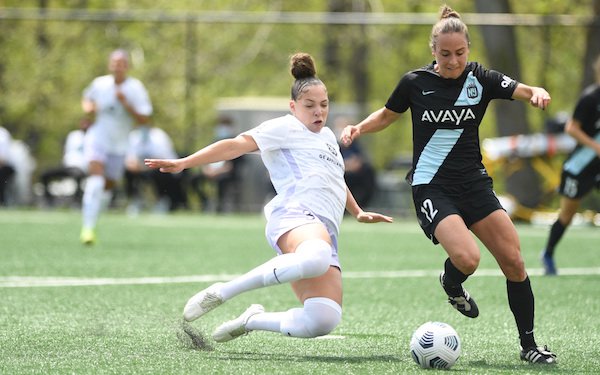 Unbeaten Gotham FC clinched first place in the East Division with a 0-0 tie with Racing Louisville and moved into Saturday's NWSL Challenge Cup final against Portland, which has clinched the West Division title on April 21.

The NWSL awarded hosting rights to the final to the Thorns, the league's best-drawing team by a wide margin, but whether fans will be allowed at Providence Park remains to be seen.

The Associated Press reported that NWSL commissioner Lisa Baird has petitioned Brown to grant an exception for the final, which will air on CBS.

“Reduced capacity attendance in outdoor stadiums with protocol is safe, which is why every state is allowing it,” Merritt Paulson, the owner of both the Thorns and the Timbers, told the AP. “If the game were held today, we could play it with limited attendance neighboring Washington County with the same numbers of fans, but not in Multnomah County. We hope the state will look at our situation logically and allow the match to be hosted safely at home, where our players earned the right to play it.”

The Timbers are slated to host their archrival Seattle Sounders on Sunday.

Oregon was one of the best states in terms of handling the coronavirus, but it has been hit hard recently with patients hospitalized who are younger, sicker and often without underlying medical conditions. Its case rate was the third lowest in the country, but new cases surged 51 percent in a span of two weeks, the highest in the country.

The measures were implemented, Brown said, to prevent doctors, nurses, hospitals and other health care providers in Oregon from being stretched to their limits treating severe cases of COVID-19. She could reverse course on Friday if the situation improves. A key will be getting confirmed COVID-19 patients in hospitals back under 300. (It is currently at 334.)