'An industry swimming in a toxic stew of gender inequality'

Several soccer clubs in the UK and the rest of Europe took a four-day timeout from social media this past weekend to protest against hate speech on the internet. It was the perfect opportunity to switch off twitter and read sports journalist Julie DiCaro's recently published book, Sidelined, about her experience working as a woman in the alpha male-dominated world of sports journalism.

When you're the victim of online harassment, Chicago-based DiCaro writes in chapter 5, 'Adventures in Online Harassment', "it's all you can talk about and think about. You feel like you're standing, naked and exposed, in the center of a circle of people who are yelling and screaming insults at you. But the rest of the world doesn't notice." To appreciate what this harassment feels like, watch the Just Not Sports #MoreThanMean video of DiCaro and fellow sports reporter Sarah Spain having vicious, vile tweets they've received read out to their faces by a group of increasingly mortified men.

There is little support from institutions or teams when facing this kind of abuse. "In an age when so many companies are encouraging their staffs to get healthy physically and mentally," DiCaro writes, "with every program from discounted gym memberships to free mental health counseling, it's bewildering that there is such a blind spot for the toll on women dealing with continual online harassment." Instead, women are often made to feel like they brought the abuse on themselves by 'pouring gasoline on the fire.' Also known as -- having an opinion. 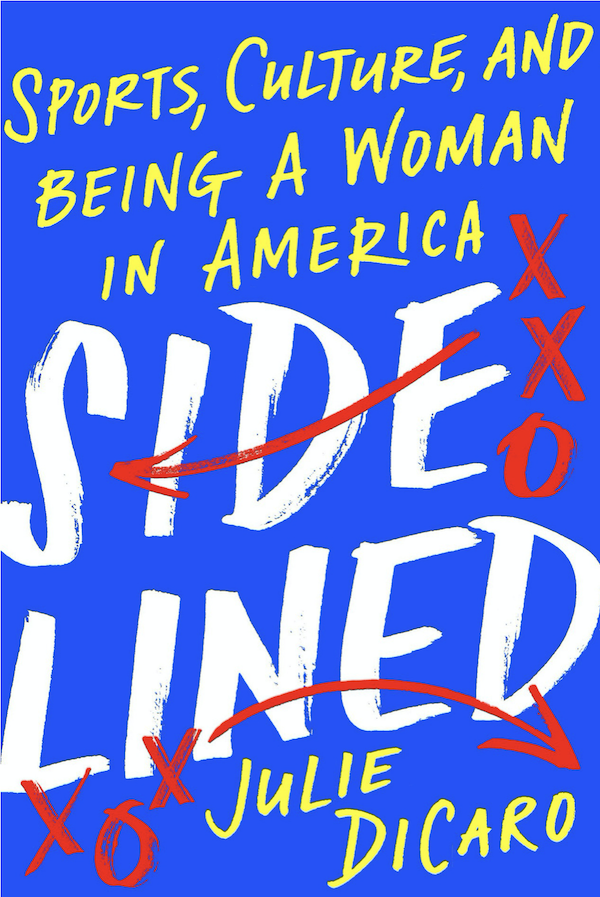 The inspiration for the book came "because I realized, somewhere around year two of my six years working in sports media, that whatever issues women have in society in general, they're amplified by a factor of about a million in sports. Women who work in the industry swim in a toxic stew of gender inequality. Often it seems as if no one cares."

In her first job in sports radio DiCaro found herself in trouble for talking about issues like violence against women or racial injustice. Yet these were exactly the issues that made sports interesting to her, "the interplay between political tensions in our society. But those same issues brought down a world of hurt on me, both online and in my career."

The book covers numerous areas where men in clubs, leagues and media organizations need to do better. For example, why is postgame locker room access still an issue? Why do interviews have to take place in the locker room at all? Why do so many male listeners still have a problem hearing a female voice talk about sports? DiCaro noticed "that every time a woman was involved in a breakout role in broadcasting sports, men online would immediately start piling on complaints about the sound of her voice." She quotes a co-worker as saying, "Bosses hire what they know. And what white male bosses know is white males.” Yet, she argues, "given the incredible diversity of pro sports fan bases across the board, there are zero reasons for us to continue to be subjected to two white men in a broadcast booth in perpetuity."

While the men are up in the warm booth, the women reporters feeling blessed to be allowed inside this testosterone-fuelled universe of balls and pucks are often down on the sideline "in a winter coat." DiCaro notes that "sideline reporting is a hard job and a necessary job. It just shouldn't be the only job for women." NFL sideline reporter Laura Okmin (founder of GALvanize, an organization teaching young women in sports media the skills they need to succeed) tells her that in the eyes of many male sports fans, "a man says something stupid, but we are stupid."

The author tackles head-on the problem of reporting on players accused of violence and sexual assault, especially when it involves a player on your beat. She posits that "manitizing" the issue means that "pro sports and the juggernaut that covers them normalize violence against women." DiCaro was one of the women who, in the days following Kobe Bryant's death, "was on the receiving end of rape, assault, and death threats, as well as a disappearing employer, for acknowledging that for many of us, Bryant's legacy included not only basketball but also a playbook for slut-shaming and intimidating a victim into dropping rape charges."

Bringing up the 2003 sexual assault allegations against Bryant "is now treated as sacrilege," she writes. Meanwhile, when the Chicago Bulls' Derrick Rose was cleared of orchestrating a gang rape of his girlfriend (a teenager also vilified by social media), jury members took selfies with him after the trial, and Bulls fans chanted "MVP!" when he returned to play against them in 2019. The Cubs, meanwhile, cut Addison Russell loose in 2019, but "also issued an inexplicable statement telling us that his history of beating a woman was definitely not the deciding factor" in that decision.

"This is the toxicity women in the world of sports media swim in every day," DiCaro says. "We are constantly weighing how much we can discuss allegations of an athlete's violence against women without turning off our male audience, while at the same time internally seething that we have to." Male journalists will mention rape or domestic assault accusations, but then "move on to discussing what really matters to them: his performance on the field."

The book is worth reading for chapter six alone, 'Kicking out the Barstool,' lambasting a pernicious media organization so repellent that it started out by going too far for Howard Stern, and then managed to skid downhill from there. "The message of mainstream brands, teams and journalists who promote or partner with Barstool is one of exclusion," DiCaro points out. "Exclusion of people of color, of women, of the LGBTQ+ community, of anyone who isn't a straight white male with a mean streak." It's up to straight white men in the industry, she posits, to "shout Barstool down."

DiCaro's advice to women in sports media is to "learn to ask for what you want," because "women are socialized not to be pushy or greedy, which too often means they are left with no advocate." Also, she says, "find a strong group of women in the industry and hold on to them for dear life. They are the only ones who are going to understand what you're going through."

This book should be read by all the male sports fans, journalists and administrators whose fathers, coaches and mentors failed to instill in them the requisite respect. They probably won't, though, and that's the real shame. Sidelined is a short, sharp and cogent manifesto from an inside perspective, written by someone who, like the rest of us here, loves sports and loves to talk about them. Everyone has that right, no exceptions. If you think sports is an all-male domain then you should probably find another hobby, and book yourself a session with the bathroom mirror.

I enjoyed my long weekend without social media. What did I do instead? I read a really excellent book.

• Ian Plenderleith is on this week's edition of Tim Hanlon's podcast Good Seats Still Available, pontificating on the subject of the short-lived European Super League

reviews
9 comments about "'An industry swimming in a toxic stew of gender inequality'".
Read more comments >
Next story loading