An icon among referees: Betty Ellis made history on Mother's Day 40 years ago

It seems that Betty Ellis  tends to work on Mother’s Day. This year, it’s a fire-safety landscaping project at her home in Sonoma County -- although her daughter, Kyle, thinks she can convince her mom to take a brunch break. On Mother’s Day 40 years ago, Ellis' work made sports history. 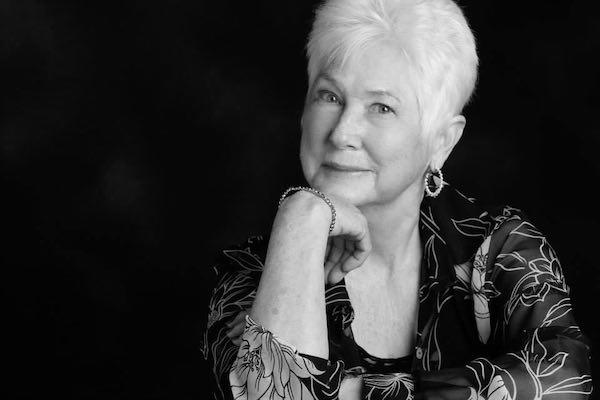 What Ellis did on Mother’s Day 1981 is why she’s on an ESPN “famous female firsts in sports history” timeline that starts in 1938 with Babe Didrikson Zaharias and includes Billie Jean King and Pat Summitt. It’s why some of her belongings are in the Smithsonian.

“A lot of mixed things were going on in the stands,” says Kyle, who was 19 at the time, watching her 41-year-old mom. “Some people were happy about it, and some yelled things like, ‘get your purse and go home.’  It was a long time ago, but what I remember most is how proud we all were of her.”

When a fan screamed “Go back to the kitchen!” – one of Ellis’ children yelled back, “She’s great in the kitchen, too!”

The NASL announced the hiring of Ellis in April 1981. She debuted as a fourth official, then continued on as an assistant referee back when that was called a linesman. A week after the Mother’s Day debut she ran the line at Portland’s Civic Stadium with Toros Kibritjian in the center. Back in Spartan Stadium – 100 miles south of Ellis’ Santa Rosa home – she had to deal with a superstar named George Best.

“Handsome dude, my goodness,” Ellis says. “He was offside on his first goal and I called it. And San Jose was not happy with me. If you ever went Spartan Stadium, you know how close the fans were to the sideline. The second time, he was slightly offside, but I was right on it. We called it back. I thought the crowd was going to climb over the barriers. 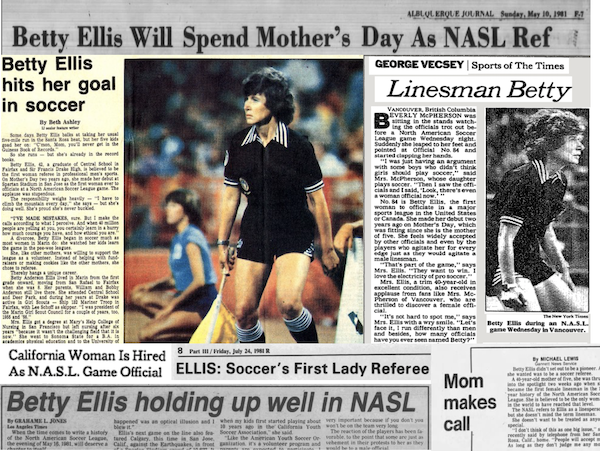 “He was very flamboyant and oh my he was ragging me. In any other instance, a linesman would have raised the flag, called the ref over and asked him to talk to the player about his ungentlemanly conduct. But I didn't want to bring any more attention on me.”

Both coaches told Ellis after the game that her offside calls were correct. Then a reporter asked her about Best’s behavior and how she kept her cool when he was giving her so much trouble.

“I said, 'He’s such a classy looking guy and such a classy player, too bad he doesn’t have class.' And they quoted me in the newspaper! The next game, he was so good to me. He didn't say boo.”

Ellis, who kept refereeing men’s professional soccer in the indoor MISL after the NASL folded following its 1984 season, started her officiating journey when her oldest child switched from ice hockey to soccer and the volunteer signup sheet was passed around. 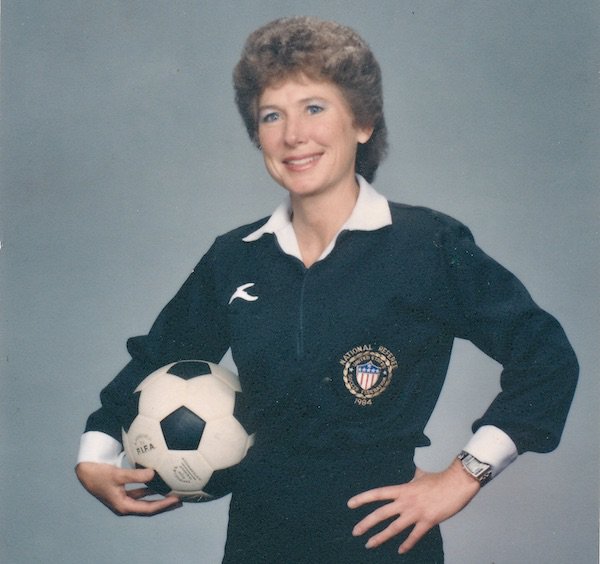 “The mothers would volunteer to wash uniforms, or bring oranges, or whatever,” she says. “I just did not have the time for that. Is there anything else I could do? 'You could referee,' they said. I had umpired softball games, so I thought that sounded like fun.”

She started at U-6, where much of refereeing was reminding the kids which way the other team’s goal was. As each of her children started joining soccer teams, Ellis’ many hours over the weekends on soccer fields spread over several age groups, as did her reffing.

Ellis recalls: “John said, 'You have a really great style about you. You handle things well, would you like to learn how to become a higher level referee, maybe a national referee? You will be breaking a barrier, there's never been a woman. But they have to know you earned your way. If you commit to that, I will support you.'"

She trained for a year and half to prepare for the same fitness tests required of the males, which included a 400-meter sprint minimum time that wasn’t far off from what women Olympians clocked in at. When she arrived at the national license course in New Orleans for 200 candidates, it was 199 men, and Ellis.

The biggest challenge -- the course's final test -- was indeed the 400-meters, to be run immediately after a series of calisthenics and sprints. Ellis came up short, but by less than two seconds. Close enough to earn another shot at it the next morning.

Many of the men, despite having spent the night partying, showed to up to support her at 6 a.m.

“It was dark and foggy humid,” says Ellis, “A bunch of guys came out. They wore T-shirts -- I have no idea where they found them -- but on the front of the shirts it said: ‘Men of quality are never threatened by women of equality.’ I was so touched by that. It really gave me a lift.”

Some of the men, who’d passed the course the day before, joined Ellis for the situps and sprints, and when she started the 400 meters, a couple of them paced her in front and a couple others from behind.

She finished four seconds better than the required time. 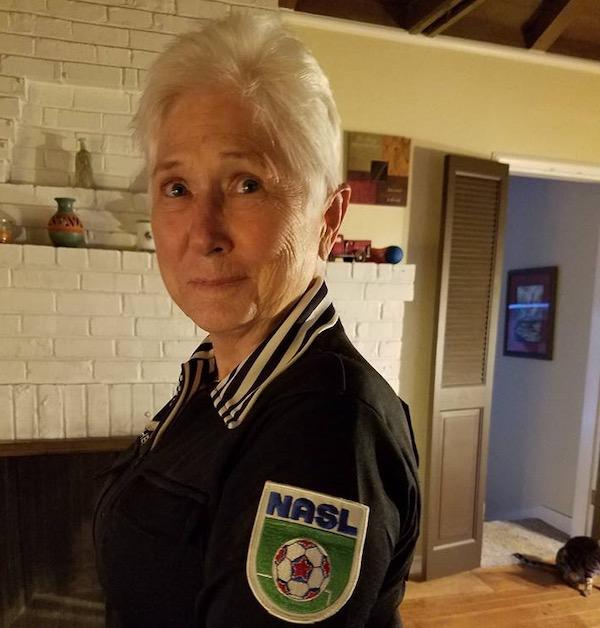 Ellis, now 81 years old, works for FIRST IN, an emergency response training company. She had spent most of her life as a teacher after starting out as a nurse.

Of all her vocations and avocations, the reffing felt unique.

“I skied, I scuba-dived, but refereeing is the most exhilarating,” she says. “It keeps you absolutely present in the here and now for a longer period than anything else. That makes you feel so exhilarated after the game.”

Ellis also served as a high school athletic director and coach of both boys and girls teams in Washington state, where one of the players who attended soccer camps she helped run was a teenage Michelle Akers. After day 1 of watching Akers, Ellis sent her to compete with the boys.

As far as making sports history …

"I knew I was breaking a barrier, but I didn't know what to expect at the time, but I hoped. I hoped. I'm very happy that I opened the eyes of women who decided to try it too.”

referees
8 comments about "An icon among referees: Betty Ellis made history on Mother's Day 40 years ago".
Read more comments >
Next story loading