Konrad on his up-and-down season at Barcelona: 'I think it was the correct decision' 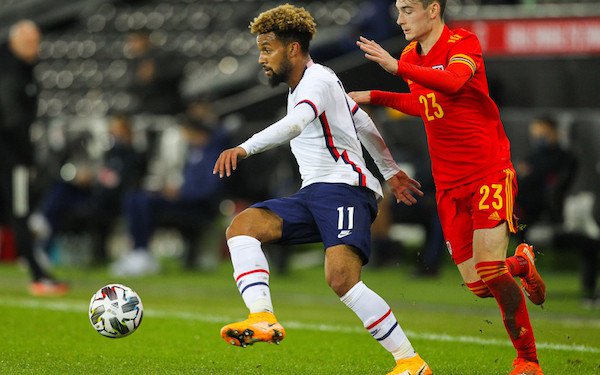 Konrad de la Fuente is one of the answers to a Yanks Abroad trivia question.

Name the four Americans who played in the UEFA Champions League for teams for which they have never made a domestic league appearance. The others are Oguchi Onyewu (AC Milan), Julian Green (Bayern Munich) and Gedion Zelalem (Arsenal).

The 19-year-old Konrad played twice for Barcelona in last fall's Champions League group stage, coming on late in away wins against Ferencvaros and Dynamo Kiev, but he has yet to make his first LaLiga appearance.

That's not for the lack of opportunities. He has dressed for half of Barca's 34 La Liga games.

Konrad trains with the first team, but his playing time has come with the "B" team, for which he played in 2018-19 and 2019-20. At first, he was playing every other week with the "B" team in the third division. Recently, he has played every game, and his form has improved -- four goals in the last three games for Barca "B," which is contending for promotion to the second division.

"Honestly, it's not really easy to be in this position because as a soccer player you always want to be playing," he said on a call with U.S. media on Wednesday. "At the beginning of the season, I wasn't playing much with either team because I was traveling with the first team and then I would miss a 'B" team game and then two weeks later I would play with the 'B team.' It was pretty difficult to get into a rhythm of games and minutes, but now I have been playing regularly for a good 10, 11 weeks and I feel really good."

Konrad said he has learned a lot about himself and what he needs to work on training with the likes Lionel Messi on the Barca first team.

"It's incredible being with the first team, training with them every day, learning from the best players in the world, especially Messi, who's one of my idols," he said. "You realize that the intensity of the first division is a lot higher than what I am used to, because last year I was playing with the U-19s. And defensively you have to work harder."

He said he supported Barca's decision to have him playing each week.

"I think it was the club's decision," he said. "They really thought it was best for my progression for me to play every week with the 'B team' but train with the first team every day. I think it was the correct decision because I feel a lot better right now."

Konrad made his debut for the USA, starting in the 0-0 tie with Wales last November. He wasn't called in for the March friendlies against Jamaica and Northern Ireland, nor was he released for Olympic qualifying. (He's young enough that he is eligible as a U-23 player for the 2024 Olympics.)

"There are a lot of really good young players coming through in the U.S. right now, some of them already playing in Europe," he said, "so it's really good. The more competition, the better you get, so I am ready for the challenge."

Indeed, Konrad is one of 11 players from the 2019 U.S. U-20 World Cup quarterfinal team who have played for the senior national team. They include Sergino Dest, his Barcelona teammate, Tim Weah, who has been playing regularly for Ligue 1 leader Lille, and Chris Richards, who starts for Germany's Hoffenheim on loan from Bayern Munich.

Like at the end of last season, there was speculation about Konrad's future at Barcelona. It wanted to keep him, so he signed an extension last summer through the 2021-22 season. Now, there's the possibility that cash-poor Barcelona will look to sell him.

"I honestly haven't thought about [next year]," the Haitian-American said. "I am just focused on finishing the season as best as I can with the 'B' team or the first team, whoever needs me, and in the summer we will see."