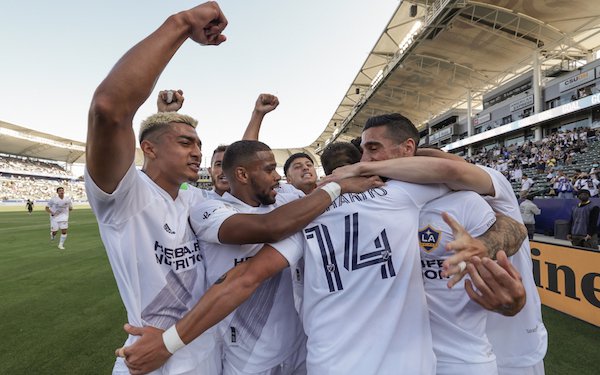 The LA Galaxy moved into a share of the lead in the overall MLS standings with the San Jose Earthquakes when it beat LAFC, 2-1, on Saturday.

It isn't the Galaxy's first win in El Trafico -- it leads the 10-game series with five wins, three ties and only two losses -- but this season has felt different in Carson.

For one thing, Javier Hernandez has delivered. He scored his league-leading sixth goal of the season, and when it looked like LAFC might steal the three goals, he set up Mexican teammate Jonathan dos Santos with the winning goal in the 79th minute with his first assist in two seasons in MLS.

Since he arrived from Toronto FC in the offseason, Galaxy head coach Greg Vanney said he has been impressed with how hard Chicharito has worked.

Minnesota United dropped its fourth straight game when it blew a 2-0 lead in the second half at Colorado and lost, 3-2, after conceding three goals in 25 minutes.

The Loons were the 2020 Western Conference runners-up, coming within a minute of beating Seattle in the conference final, and were expected to challenge for a berth in MLS Cup.

"But that’s harshly how it is when you defend like we’ve done on the road," Loons coach Adrian Heath said of the 0-4 start. "Seven goals. The irony is, is the two from us in the first half have been probably the best we’ve played. I thought the first half tonight we were exceptional at times. All the things that we did well in the first half, we didn’t do in the second half."

And it wasn't just with one part of the Loons' game.

One of Heath's choices was a head-scratcher. He took off playmaker Emanuel Reynoso, who scored the first goal on a free kick, and brought on defender Brent Kallman in the 80th minute. Two minutes later, Danny Wilson scored the winner for the Rapids.

“Well, at that stage, I thought we were gonna lose the game," Heath said. "As it proved, we did. I just wanted to get another defender on because they were putting a lot of balls in our box, and I thought another body in there might help us. But it wasn’t to be.”

On top of a 5-10-8 record in the shortened 2020 season, it's been a miserable start for the new regime of sporting director Georg Heitz and head coach Rafael Wicky, the Swiss pair who had worked together at FC Basel.

Despite a 10-game winless streak that extends over two seasons, Wicky still likes the roster that's been constructed.

"We think that we are building a really good team here," he said, "we are happy with our roster when everyone is there. We think we have a very competitive roster, a good mix of young and old, dynamic players. I believe in that, we believe in that. But of course, at the end of the day, we need the results and those results are not here, those wins are not here and that's why, of course, right now we're not happy with where we are."