The Galaxy is grinding, often down (or dominated) but never out 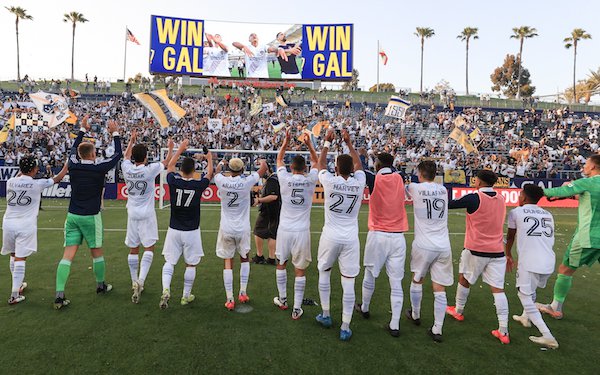 Greg Vanney's reconstruction of the LA Galaxy has barely taken its initial steps, and there is clearly much that needs to evolve before the five-time MLS Cup champions can begin to approach the kind of stature they held through that dynastic stretch under Bruce Arena. Early signs are beyond promising.

It's not just the results, which have been good. The Galaxy (3-1-0) has picked up nine points in four games, something it had accomplished or surpassed only five times before, in seasons in which it won an MLS Cup (and lost another), claimed two Supporters' Shields, and finished atop the Western standings on three occasions. Only the Seattle Sounders, the only side so far to slay LA, have more points across the league.

It's more about how Vanney and Co. have gotten results and what they've overcome to snare points, because the Galaxy has labored through every step in every game, fortunate to be in matches that might have been out of hand on another day.

That's how things might have played out in Saturday's first El Trafico showdown this year with Los Angeles FC, which with better efficiency (and perhaps with Carlos Vela, out with a quadriceps injury) might have made more of its territorial domination, especially before the break, in an intense and often electric advertisement for Major League Soccer's best derby -- sorry, Cascadia -- that showed off the rivals' issues as often as (or more so than) their strengths.

The Galaxy is, as they say, a work in progress, just half a year into the most comprehensive restructuring of the first team since Arena took over a bumbling side at the end of the 2008 campaign and had it in the MLS Cup final a year later. Vanney, whose professional playing career began and ended with the Galaxy, would love to follow suit, even sooner -- like, December -- if that's doable.

Right now, it probably isn't. LA is still figuring out who it is and what it does and how it does it, but things can change in a hurry, and MLS works on a make-the-playoffs-and-anything-is-possible idea of parity. And let's remember how quickly Vanney turned Toronto FC into a contender and then champion. The Galaxy certainly has a belief, an energy, and a spirit that's been absent since Arena left following the 2016 season, one that could blossom into something more. We saw that at its best on Saturday.

The Galaxy, playing with heart if not precision from start to finish, netted opportune goals near the start and finish -- both requiring unexpected defensive heroics -- to pull out a 2-1 triumph  at Dignity Health Sports Park that proffered a 5-3-3 edge in the series with LAFC and bragging rights across SoCal, at least until the Aug. 28 rematch a dozen miles up the 110 at Banc of California Stadium.

Javier “Chicharito” Hernandez netted his league-best sixth goal of the campaign and played deft middleman on Jonathan dos Santos' 79th-minute winner -- continuing to wipe away whatever stain remains from last year -- as LA claimed its second late victory of the campaign. It required some hefty halftime adjustments, already a regular feature under Vanney, whose detailed and savvy approach to the game is starting to make an imprint.

“They laid it out all there today,” Vanney said. “Every single guy that went out there gave it everything they had to the victory. ... They earned it with their work rate, their commitment, sticking to it. They got a lead, they gave up the lead, they got it back, and so I am proud of them. It is a group of guys, who if they continue, which I can believe they will, will gain the character that they have to compete in these games.

“We will continue to get better as a team. If we can carry this along with us, we will have a very good group that will be hard to beat.”

They're already demonstrating this. They had to overcome two deficits -- after being pinned inside its defensive third much of the first half -- to overcome Inter Miami, 3-2, in the opener, held on to topple New York Red Bulls, 3-2, in their home opener a week later, and came out on top after preventing LAFC from capitalizing as it should have on its territorial dominance, conceding only a 62nd-minute goal to Diego Rossi that followed a quick, three-pass sequence that carved up LA's box defense.

The Galaxy is doing so for a number of reasons. The biggest Hernandez's deft play up front. He's scoring poachers' goals -- two against Miami, a hat trick against New York, and a stirring opener in the 11th minute Saturday -- while offering a master class on off-the-ball movement. The hope is that will bear greater fruit as chemistry evolves and new arrivals, starting with speedy French winger Kevin Cabral (who ought to debut before the month is out), integrate into the team.

Goalkeeper Jonathan Bond, brought in from West Bromwich Albion to replace David Bingham, has been the most important pickup so far, making big stops, taking command of his box, and organizing a backline that has fared surprisingly well -- not perfect, by any means -- as LA surrenders, on average, two goals a game. Daniel Steres and Nick DePuy have repeatedly cleaned up debris at the back, often sliding for tackles or to cut off dangerous balls; one by Steres on Saturday started the sequence that led to the free kick that led to Chicharito's goal.

Derrick Williams, just in from Blackburn Rovers, did even more on that goal, sliding the ball away from Jose Cifuentes as he started to break out in transition and right to Hernandez, who finished as a goalscorer should. Williams has played just a game and a half, so the synapses are still developing as LA looks to become better defensively as a whole. Opponents have effectively attacked the Galaxy between its lines -- that fueled LAFC's greater possession -- and that needs to stop.

That possession, Vanney noted, “was at times our inability to hold the ball. For the amount of pressure [LAFC] put and how quickly they pressure, the ball has to move a lot faster, and we have to get off of one side and quickly to the other side, which means doing a lot of work before you receive the ball, to organize yourself to get across the field.”

A week earlier, after the 3-0 loss in Seattle, he talked about recognizing situations.

“Defensively, we have to get better about recognizing what is more dangerous than something else,” he said. “Sometimes we go stepping out and trying to defend things that are less dangerous than the space that we are leaving, and it exposes us. That's something we have to get way better at. The second is proactively organizing each other and pulling the group back together and not feeling like we have to chase every ball, to press every ball. and then transition-press every ball, but actually just reorganizing our block and knowing how to just defend to protect ourselves a little more.” 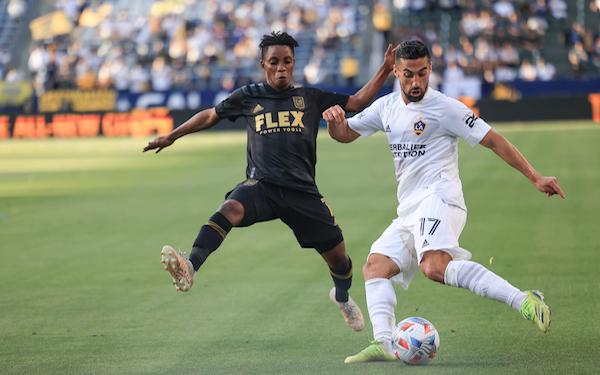 These things are fixable, and based on Vanney and his staff's history, are going to be fixed. LA hasn't had its full squad together yet. Cabral is a DP and Sega Coulibaly, also arriving soon from France, could be key at the back. Williams just got healthy, and Victor Vazquez -- the creative midfielder who understands Vanney's system -- missed the LAFC game through injury. Sebastian Lletget missed two games through suspension, and Julian Araujo has played at different spots on the right flank after missing the first game from a 2020 suspension. Winger Samuel Grandsir and left back Jorge Villafaña, both new arrivals, are still finding their footing with the group. Several youngsters are gaining experience and doing well with it: Cameron Dunbar's persistence in a 1-v-3 situation near the left corner triggered dos Santos' strike.

There's a lot going on as Vanney implements a new culture built around “principles” that demand a greater understanding of what's happening on the field and the connections required to make that viable.  It's about players, individually and collectively, reading situations -- recognizing tactical and positional shifts by opponents -- and making the proper adjustments naturally. That takes time to put in place, and it's not yet part of LA's arsenal, but his adjustments in every victory, starting with the wins at Miami and against the Red Bulls, have provided paths toward the necessary understanding.

We saw that again Saturday, when LAFC was at ease in possession much of the way while applying heavy pressure to quickly recover the ball during transitions. The Galaxy was fortunate to hit halftime with a lead. Vanney, whose substitutions have been largely effective so far, shifted some things in the locker room -- pushing higher in attack, getting players in front of LAFC's center backs and dropping a forward deeper onto the pivot -- and the Galaxy was in better shape the rest of the way.

“I was trying to make the adjustment in the course of the first half, but one of the things that we still are a work in progress on is in-game adapting,” said Vanney, whose substitutions have been largely effective so far. “When a team adjusts into something new that maybe we weren't expecting or it's just happened, then we need to make an adjustment with that to try to control them, especially a good team like [LAFC].”

He's confident that will come, in time, the less the better. Until then, the Galaxy is grinding, often down -- or dominated -- but never out. They're willing themselves to win, and that's something we've rarely seen the past five years.