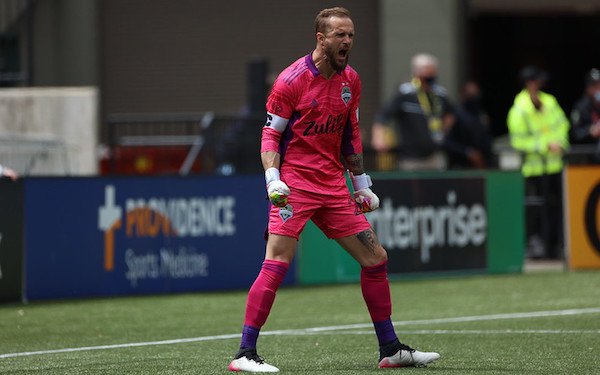 In the first four games of the 2021 MLS season, the Seattle Sounders have demonstrated why they've been the league's most consistent team with four appearances in MLS Cup over the last five years.

They've opened 2021 with the following results:

Three wins and a tie give the Sounders 10 points and the lead in MLS's overall standings after Week 4.

Raul Ruidiaz scored his fifth goal of the season, one behind league leader Javier Hernandez, and Fredy Montero added his second goal since his return to Seattle.

The Timbers had looked to be in position to take the lead in the 54th minute when they were awarded a penalty. Sounders goalkeeper Stefan Frei made the stop on Diego Valeri, only for the Timbers to be awarded another opportunity after encroachment by Seattle on the first shot. Valeri took the second shot but missed again, hitting the post.

Once again, Sounders coach Brian Schmetzer used the 3-5-2 formation he moved to after Jordan Morris suffered a knee injury that will likely keep him out of the 2021 season, and once again he got help from a pair of newcomers, Washington native Kelyn Rowe, starting in midfield in place of injured captain Nicolas Lodeiro, and Montero, who scored nine minutes after coming on for Will Bruin.

The Sounders' schedule doesn't get any easier with their first midweek match of the season on Wednesday at San Jose, second in the overall standings with three straight wins, and the second meeting with LAFC at home on Sunday.

"So far it's been great," said Frei, "but we're going to try and extend this as long as we can because we're feeling good and we have guys like [Montero] coming in and contributing, so I'm really happy, This is a big deal to come down to your arch-rivals' home and get a win, it's massive."